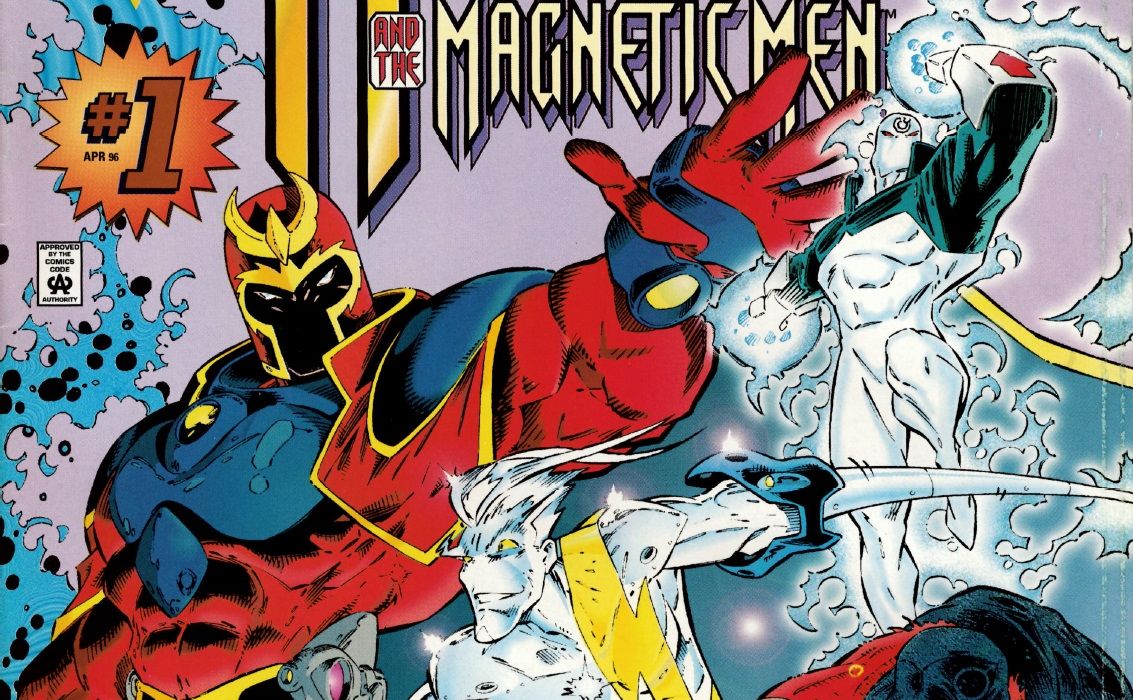 The summer journey through the Amalgam Universe continues today with a review of “Magneto and the Magnetic Men”.

The Mashup
The Metal Men & The Brotherhood of Evil Mutants. I’m aware of both groups, but not familiar with either of them. That makes it really hard for me to identify who’s being amalgamated. Costume designs allowed me to pick out Quicksilver and Scarlet Witch. “Wizard” identified Toad for me. The Marvel halves of the other two members are a mystery to me, and it’s very possible I wouldn’t know who they were if someone told me. On the DC side, I know the female member of the metal men is Platinum, but I don’t know their personalities well enough to figure out who’s been combined with whom.

This issue was written by Gerard Jones with a credit to Mark Waid for some concept help, drawn by Jeff Matsuda, and published by Marvel. 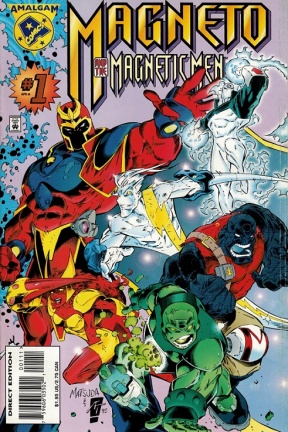 The Plot
A mutant amalgam of Katana and Psylocke (I’m guessing, but I’m confident here) is fleeing an attacker. Just as she’s caught, the Metal Men burst through a wall to save her. They’re surprised to see her pursuer is Sinistron (Mr Sinister + Brainiac maybe?), their ‘cousin’ created by Magneto’s brother. You see, the evil Will Magnus created sentinels to hunt mutants like his brother, Erik Magnus. Erik combined his brother’s designs with his magnetic powers to create the Metal Men, who protect mutants.

Sinistron escapes, and the heroic group talks amongst itself. Magneto reminisces about how he created the emotionless Metal Men to replace his dead friends. Their personalities are artificial and we’re told they’re incapable of feelings despite their frequent emotional outbursts.

The team flies to Sinistron’s citadel and attacks to free the mutants held captive there. Sinistron protects himself with five brainwashed mutants, whom Magneto does not want to harm. Magneto tries to attack Sinistron directly with electromagnetism, but Sinistron reverses polarity [insert scientific sounding jargon] and renders Magneto…comatose? Paralyzed? He stands still with a yellow cloud around him. 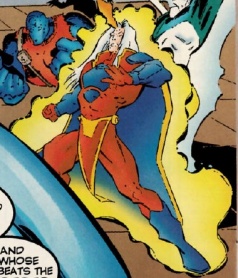 It turns out that freezing Magneto causes the Metal Men to freeze as well, since they’re kept alive by his magnetic powers. Sinistron pontificates for a bit, but then the Metal Men “break free of the master’s mind” and fight independent of him. Two of them die and the others free Magneto, who beats Sinistron easily this time. It turns out the two metal men didn’t actually die – one’s fine and the other just needs to pull herself together. The mutants are saved, but Sinistron has escaped again.

What “Wizard” thought then
The name came to the writers first, and they liked it so much they stuck with it even when they found out it put limitations on them. (There are only three magnetic elements. Science!). In their advance coverage, “Wizard” came across as skeptical about this one – “A robotic toad certainly strikes fear into our hearts” (#56 p24). Despite being X-Men related and the second-best selling Amalgam title, they never mentioned the book in their followup commentary.

What I think now
It’s over written, and I place the blame for that with editor Mark Powers. Jones and Matsuda are responsible for coming up with ideas, but it’s Powers’ job to help them present the ideas clearly. He should have helped them develop an idea better or talked them into leaving it out. I’m thinking specifically of the five mutants under Sinistron’s control. Here’s their first appearance, as headshots only:

And here’s their second appearance. 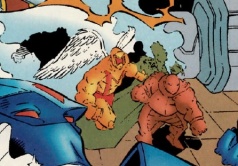 And that’s it. Two panels. They’re never seen again. Why were they included if they’re not named or even shown clearly enough for fans to identify? What’s the point?

When I reviewed “Spider-Boy”, there were several concepts that were introduced and then tossed away, but I gave Karl Kesel and Mike Wieringo a pass on it because the book was overflowing with ideas and there wasn’t room to develop anything. That isn’t the case in “Magnetic Men.” This comic has four full-page splashes and one two-page splash. That’s six pages out of 22. Every fourth page is one panel! Even worse, five of the remaining pages have no more than three panels. “Magnetic Men” was not full of story. There is no excuse for dropping the ball with these five mutants.

Beyond that, Jones constantly relies on some pretty cliched pseudoscience babble to move things along. Polarity is reversed no fewer than three times. From scene to scene, the relationship between Magneto and his creations seems to change. Sometimes they act independently enough to surprise him. Other times, they’re only able to function because he makes them move. That inconsistency makes their big break from Magneto’s control at the end anti-climatic.

From a story standpoint, this issue feels like a first draft. It’s underdeveloped, poorly paced, and overly wordy.

Art-wise, it’s fine. Matsuda’s manga influence is on full display, but not always the best fit. Backgrounds are frequently reduced to speed lines, especially during fights. At first I thought Nickel’s facial expressions were exaggerated for effect, but on a second read I realized he’s able to stretch. The character designs are all distinct, if a bit basic. Sinistron’s design is about as 90s as it can be.

Matsuda’s storytelling is hit and miss. Some scenes can be understood without reading the dialogue, but other times the choreography doesn’t align from panel to panel. I’d be really curious to know how this was scripted, because there are several panels that don’t make any sense with the text. Like this sequence, where a computer terminal is randomly inserted. Does this make sense to you? 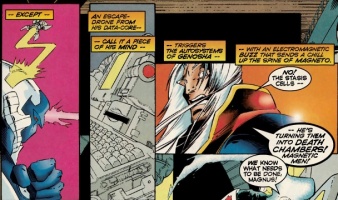 Combining this with other scenes and other faults, I can’t help but feel Matsuda and Jones were telling different stories. The result is a concept with unrealized potential. If this series were ongoing, I wouldn’t subscribe, but I’d follow reviews of later issues and maybe pick up a trade if I heard good things. 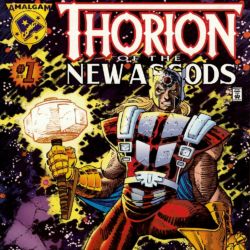 It’s been a while since we had a wholly positive review of an Amalgam Comic. The drought isn’t over this week, but the journey through Amalgam Comics continues with “Thorion” anyway.The Mash UpCharacters from “Thor” are merged with the New Gods. Some of these elements were introduced in the wave one book “Bullets & Bracelets”, […] 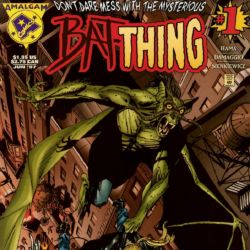 This is about the Amalgam Comic “Bat-Thing”, not that panel in “Batman: Damned”. It’s also part 19 in our 26 installment journey through Amalgam Comics.The Mash UpMan-Bat meets Man-Thing, as told by Larry Hama, Rodolfo DaMaggio, and Bill Sienkiewicz. This is another DC production.The plotYou’d expect this to be about Bat-Thing, but you’d be wrong. […] 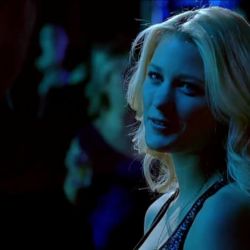 Welcome to Multiversity Comics’ Summer Binge of Fringe, a series that Parks and Recreation’s own Ben Wyatt once called “airtight.” This week, with the antepenultimate (yes, I did have to google that) episode of the season, the show delivers an exciting conspiracy and takes some small but meaningful steps forward in the season arc.1. This […]