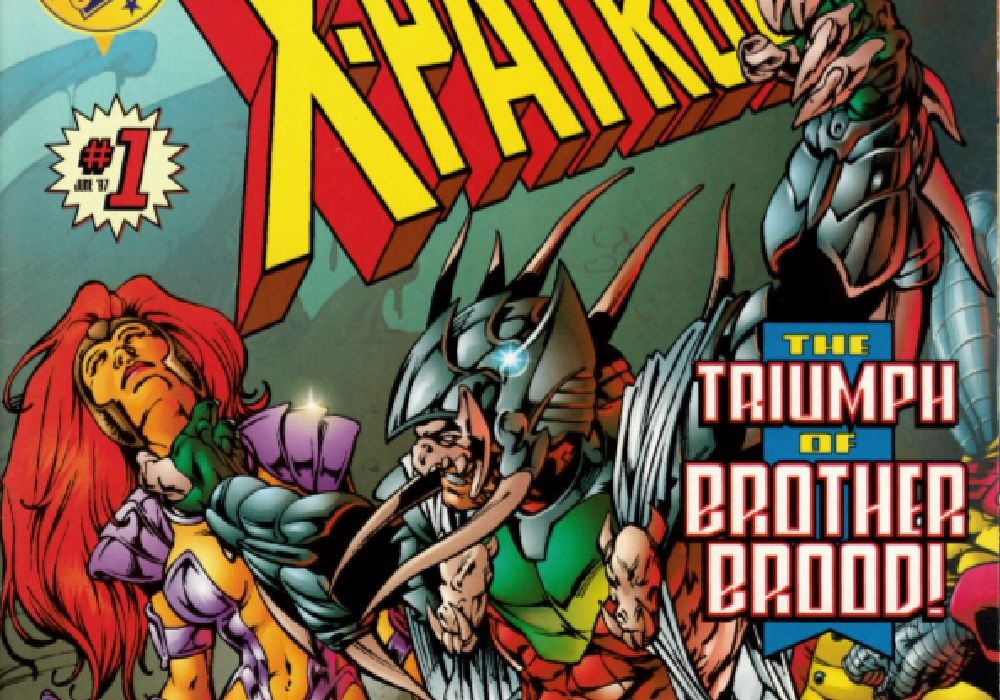 Shatterstarfire! Dial H.U.S.K! Beastling! Niles Cable! X-Patrol was so popular in 1996 that it received a spin-off, “The Exciting X-Patrol”, in 1997, and it’s the next stop on our journey through Amalgam. 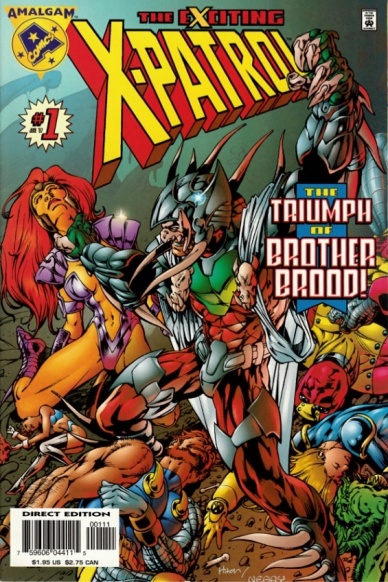 The Mash Up
Just like “X-Patrol” in wave 1, this comic pulls from a huge number of teams from both universes, but most of the new elements come from “Teen Titans” and “X-Men”. This time we’re introduced to Jericho, who looks like a tan-colored Thing, Raveniya the Healer, Terra-X, and Brother Brood.

Barbara Kesel returned without her co-writer Karl Kesel, and Bryan Hitch partnered with inker Paul Neary for the artwork. The issue is published by Marvel, and dedicated to Marvel (and Amalgam) editor Mark Gruenwald, who died in August 1996.

The plot
The story opens with Shatterstarfire and Niles Cable fighting some Brood in a cave. They’re being overwhelmed, so Cable uses his telepathy to launch Shatterstarfire through the ceiling so she can escape. She returns to X-Patrol HQ to update the rest of the team. They argue for two pages before Dial HUSK reminds them they should go save Cable. This reveals some characterization, but the main takeaway is that only Elasti-Girl trusts new team member Jericho.

Meanwhile, Cable has been jailed, impregnated with a brood, and left alone. He is visited by Raveniya the Healer, who is a spirit or a ghost of some kind I guess? She can talk to him but she can’t help him, and she just appears and disappears. She reminds Cable that he has “a little piece of [her] soul-self” inside, and that he can use that to cure himself of the Brood. The catch is that if he uses it for that, he can no longer use it to keep the technovirus at bay and he’ll die anyway.

The X-Patrol arrive and fight some brood. Brother Brood reveals his plan to infect a mutant with a brood, which will be a bad thing because…. well, it’ll be bad. Somehow it will increase persecution of mutants in the future. The heroes fight Terra-X, who is a cross between Teen Titan traitor Terra and former herald of Galactus, Terrax. They beat her pretty quick (four panels).

Brother Brood brings out Niles Cable, who is forced to fight his team. During battle, Jericho’s rocky exterior is blown off and – gasp! – it was just a disguise! This whole time, Jericho had been a younger version of Cable from an alternate timeline where the Brood took over Earth.

Knowing there’s another Niles who can lead the team, Cable decides to use his healing ability to cure the Brood Queen inside Brother Brood, leaving the villain(s) dead. The technovirus immediately starts taking over Cable, but Raveniya returns and heals him – completely. He’s not crippled anymore. But then it turns out Raveniya was a skin being worn by Dial HUSK. Maybe. The characters in the comic don’t understand what happened, and neither do I.

The team celebrates their victory over the Brood and their new team mate, a man from a time that no longer exists. An “Ex-Man”, if you will.

What “Wizard” thought then
Not a whole lot. They remind readers that “X-Patrol” happened in 1996 and give a quick summary of what happens in the first two pages. Kesel promised them she’d include as many amalgams as she could, but a lot of them are just name dropped. Her favorite was HUSK’s first transformation: Artimisty Knight, the Bionic Amazon Archer. The Sea Devil Dinosaurs sound cool, though.

What I think now
This was… fine. It was styled as the final chapter of a longer epic, but there was a lot of tension felt by the characters that didn’t resonate with me.

Kesel’s writing was competent. It was a linear story with each scene moving naturally to the next. The key players were introduced with text boxes that told readers the secret and super identities and elaborated on their connections, which was really helpful. Other characters, like Raveniya, just appeared without context and left me as lost as I suspect many first-time readers were when they picked up an X-book in 1997. Maybe that was part of the joke? 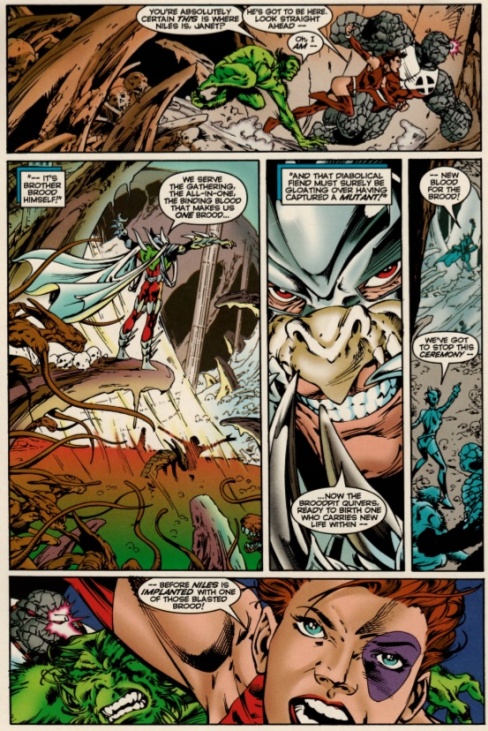 The art was clear, although it lacks the crispness Hitch later achieved. There are so many close ups and vertical panels, I wouldn’t have recognized this as Hitch’s work if it weren’t for the credits. It certainly lacks the widescreen feel he built his reputation on later. Like the writing, it’s competent but doesn’t grab me.

Overall, “Exciting X-Patrol” was very average. If there was a second issue (or back issues leading up to this one), I might buy them from a quarter bin, but I wouldn’t seek them out. Others might find more here to like.