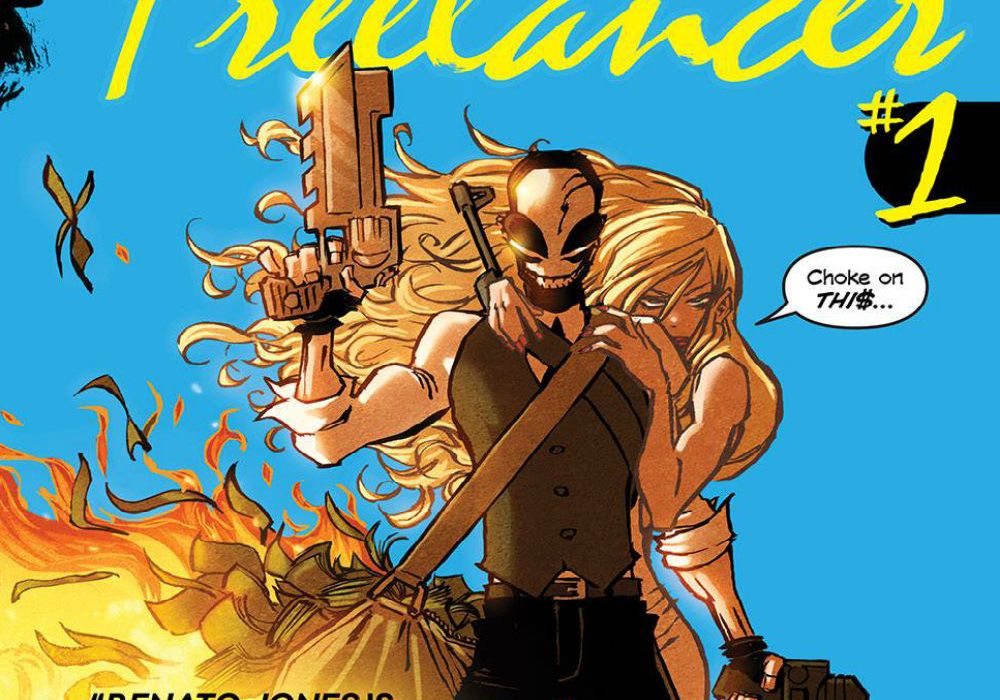 Renato Jones is back! After breaking bad and taking a personal vendetta against the rich, Jones lost something he held dear. The first series set up numerous villains for Jones to take down and Kaare Kyle Andrews is back write, draw, color and own his second series. The first volume of Jones was filled with unbelievably beautiful layouts, designs and attitude-here’s hoping season two will continue the tradition while adding some more substance to the narrative. Can Renato Jones continue to deliver the psychedelically sinful visuals? 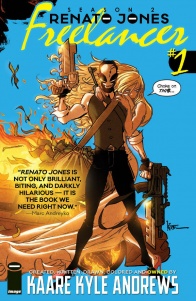 “THE FREELANCER,” Part One Mysterious vigilante Renato Jones showed the One% that, for all their money, for all their power, they are not untouchable. But now they’re pushing back, and the resulting class warfare may be more than even Renato can handle. When full-time villains control the whole world, the only hero who can take on the job is self-employed…a Freelancer. KAARE KYLE ANDREWS proudly presents Season Two of the most dangerous comic on the planet!

Andrews continues to pull of more than a few insane visual tricks in the follow-up to “Renato Jones Season” #1, but it can be disappointing to see how little this series has grown during the break. There’s no real resistance poised at The Freelancer who continues to battle the uber wealthy. While this issue does throw a pretty large twist at Jones towards the end, a lot of the same ground is covered here that was already well established in the previous volume.

This issue is worth a purchase alone based on the wide assortment of visual tricks filling these pages. Andrews distinctive character poses and insane layouts are just the start of the visual flourishes encompassing these pages. The artist uses a few different styles in this issue alone, shifting between a looser, more modern look to one more centered around a Frank Miller-influenced noir look draped in intense shadow. There’s also flashback scenes that are colored in a much different warmer hue as compared to the rest of the work seen here. There are a group of black-and-white scenes that amp up the tension of the issue with lots of ominous silhouettes and details that enhance the mood. The blue lettering boxes and sound effects sprinkled through these pages are a great effect that laces this comic with strong, chaotic tension. Some of these pages have such small amounts of detail but each line is incredibly important to making the page feel complete.

Just viewing Renato Jones as the chance to see Andrews really get the chance to push his artistic style to the limit of what can be contained in a comic is an absolutely thrilling proposition. On every page there is a at least one visual trick or silhouette coated image that can stop you in your tracks just to think about how much these elements add to the story without readers paying attention to them. By adjusting backgrounds, sanding off the paper of the comic and switching to a more traditional art style, this series functions best as a visual feast full of perverse experimentation that merits some tragic lows and unforgettable highs. Andrews loses sight of the story and narrative elements early on in this issue in particular but the excitement and energy of the visuals ensures that Renato Jones is always going to be one of the most interesting books on the stands.

I was hoping that Andrews would utilize season 2 as the opportunity to introduce more depth behind Jones. However, much like “Iron Fist: The Living Weapon,” Andrews’ lead seems driven by a carnal rage that doesn’t evolve much past the surface level. This issue is heavy on lots of contrived narration that falls into the cliche camp more often than I’d like to admit. The advertisements in particular have lost the biting sense of satire that made them so charming in the first issue. There’s a few moments in particular where they start to disrupt the flow of the actual story. There are also one too many times here where big, bombastic splash pages interrupt whatever momentum of narrative driving this new installment.

There’s a lot to like about “Renato Jones Season 2” #1 but the comic hasn’t moved much farther past the initial premise. Andrews’ commitment to violence and murder of the 1% does also seem a bit sadistic at the end of the day. However, Andrews’ wild artistic experimentation is unmatched in the comic book industry. The amount of material thrown at the wall on the fringes of this comic well worth the price of admission. Between the silhouettes, experimentation between different art styles and anatomy it’s impossible to deny the immense level of technical proficiency propelling this comic to visual greatness.