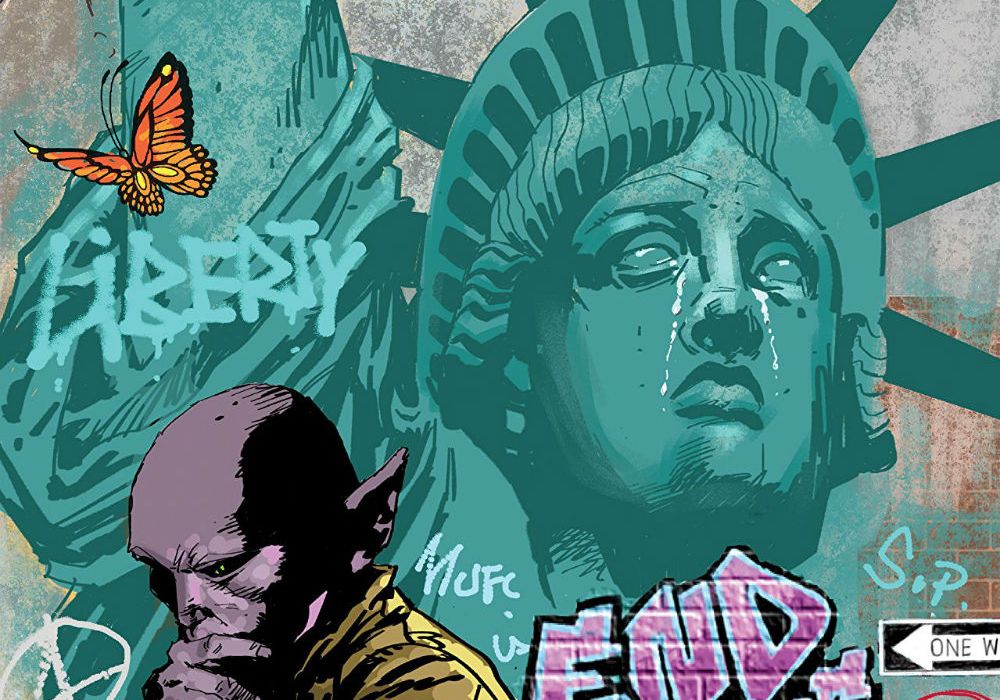 The fifth “Resident Alien” mini-series kicks off this week and as someone who has never read any of the others, that came as a bit of a surprise. The premise of aliens, mystery and a detective is an enticing one though so I’m willing to be confused for that sake. As a first issue, then, how does this fair? Is it a mystery worth pursing or is it something better off skipped? 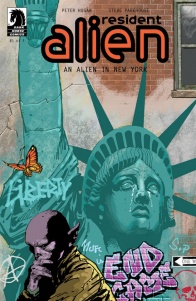 A stranded alien continues to hide in plain sight in Patience, Washington, posing as the small town’s doctor. When a startling new mystery catches his attention, he takes a trip to New York City with one of his only human friends, a Native American shaman. Peter Hogan (2000 AD, Tom Strong) and Steve Parkhouse (Milkman Murders, Doctor Who) continue their unique, acclaimed science-fiction/murder-mystery series!

Contrary to what the title would have you believe, “Resident Alien” doesn’t begin in New York but instead clear on the other side of the country. As far as first issues go, this does an admirable job of getting newbies like me caught up to speed on who Harry is, what his life is like, and how the heck an alien can hide in plain sight. The pacing is slow, allowing each of the characters plenty of time to talk and to interact furthering each of what I believe to be their arcs throughout the minis.

I don’t know who each of the characters are but through Parkhouse’s art and Hogan’s writing I do know what they are like. Parkhouse does a wonderful job of creating that most nebulous of artistic terms: atmosphere. Every location feels lived in because of his coloring choices and slightly sketchy lineart. It’s rough but in a way that evokes the grungy world of the comic which is filled with real people living small but complicated lives.

This smallness and the slowness of the comic are a great boon to the character work and to making the town feel all-encompassing and true. This is no longer some fictional town with an alien doctor; it is now my home town, with people I want to hang out with and just sit around and talk to. The stakes are low which makes something like page 4 impactful without needing to be earth shattering. All it is are four simple panels. The top one shows Harry arriving at work and the bottom three, which are all vertical panels, show Harry reacting to a drawing of himself on the wall.

They’re slow, allowing the moment to set in with us and him. While we cannot see his face, the isolation of the drawing in the final panel and the washed out, shadowed shading on the back of Harry’s head as he says, “Oh . . . NO!” give us all we need to know. This is big and this is bad for him and most of the issue is fallout from this one action. It signals what could be a major shift for Harry yet the comic manages to make it as if this were happening in real time. We watch him make plans, wrestle with his decisions but none of it in a melodramatic way. In a way, this comic about an alien doctor is more grounded than some of the “grounded” comics I’ve read recently.

What hurts this comic, though, is the fact that this is the fifth mini-series but it reads like an in-between issue of a monthly series or the first in a reboot. As I said before, it catches up those who are new easily and quickly but the threads that the comic chooses to advance (ex: Don and Red Jacket Woman, Harry and Honey) are ones that are only satisfying as continuations of previous conversations. Additionally, we don’t even get to the central mystery of this four-issue mini until the last couple pages. Heck, we aren’t even in New York yet.

For a sci-fi/murder mystery, that’s a big problem. Most of that comes down to the pacing of the comic. The pacing works super well for a tight, focused story about an alien doctor trying to live a “normal” life in a small town but not so much for a series of murder mysteries spread across multiple minis. I’ve been given a reason to want to follow the life of Harry and co. with this issue but not enough of a reason to be invested in what will now feel like a diversion from the town drama which is truly unfortunate.

This is a very well-crafted issue and were I to have read the previous minis, I’m sure this would be a welcomed return to the series. The balance of dry humor, quiet drama, and a lived in world are a great boon to the series, turning what could have been an unengaging comic into one I want to return to month after month, even if I didn’t get as much mystery, or New York, as was promised.

Final Verdict: 6.9. A well-crafted issue that is held back by having to be an introduction point as well as the first issue of the fifth mini-series. It’s hurt by its slowness but its slowness is also its greatest strength. If you’ve read all the previous series before this one, you’ll probably get a lot more out of it than I did.