After so many teases, mini-series and innuendo, the original Wolverine is finally back on the end of the trilogy that marked his Death and Hunt. But was it really worth the wait? Are there really still new ways to tell compelling stories with one of Marvel’s most known characters? If this first issue is any indication, the answer is a resounding “yes.” 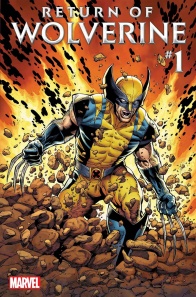 Wolverine, as a character and an intellectual property, has crossed that barrier that restricts him to his own origin in comics. Fans of the Canadian mutant may have known him from comics, but also from his multiple big-budget movie appearances, cartoons, not to mention the other versions of the characters in comics. What feels the most refreshing about this new series, paradoxically, is how classic his portrayal is. Reading “Return of Wolverine” truly feels like encountering an old friend (a dangerous, sometimes maniacal friend, true) for the first time in ages. And that portrayal permeates everything about the issue, from design to execution.

Visually, Steve McNiven has chosen, very wisely, to homage and channel another of comic’s masters, Barry Windsor-Smith. Famous for his work on Logan on the seminal ‘Weapon X’ story in the ’80s, Windsor-Smith instilled Wolverine with a very specific aesthetics. Dirty and messy environments, panel design that felt like the confused mindscape of a lost hero and a hero that was depicted more like a force of nature than a man. All of those elements can be found on “Return of Wolverine,” but it never feels like an imitation, but rather a visual acknowledgment that Logan’s recent ordeals have taken him back to a certain mental moment of his life.

The visual consistency found on these pages is equally balanced between quiet and action-filled moments. When the focus lies on character interaction, it is beautiful to see a disheartened Logan, his sad eyes portrayed with an honesty not often seen in comics. Readers need little more than the artwork to understand how tiring it must be to be Logan, how lost he truly is. The horror and desperation on side-characters that feel the collateral damage is just as impressive, with some haunting imagery towards the beginning and ending of the issue. McNiven was also able to show control on the more intensive bits: instead of going for the gory, huge splash-pages, panels alternate between the claustrophobic and the wide open spaces, but never let go of that sense on urgent continuity: there is no allowed freedom for Logan in “Return of Wolverine,” not just yet.

Inks by Leisten and colors by Martin complement the art package in two very particular ways. First, inking had a field day adding layers to the dirtiness and gore that fills these pages. Not only that, but the attention to detail on the line work on Logan’s body hair is impressive. Colors play a key narrative element, that of distinguishing moments that are firmly set in the present reality (sharp, vibrant tones), as opposed to those sequences set in the past or in the past mindscape of Logan (grayed, watered-down tones). It all comes together to a consistent, vibrant and flowing art package.

Soule does many things right on his script. First of all, setting, tone, and mission statement are aligned with some of Logan’s best past moments, that of a man lost in his memories and past, with little more than his internal moral compass to guide him, unable to trust anyone or anything around him. Readers are just equally lost this time around, unsure of where “Return of Wolverine” takes place, or when in recent events the story unfolds. It adds to the sense of mystery, of uncertainty, which propels the consequence of the action and character interaction to great heights. The series antagonist is also a conundrum, seemingly acting as a benefactor at times rather than a true enemy, despite what looks like an evil agenda.

More than surroundings and situations, Wolverine feels like a version of the character that has been sorely missed, even before his death. “Return of Wolverine” shows Logan as the battered, wise, yet animalistic, hero. The lost samurai, the saddened warrior. Maybe it is the combination of the art style, maybe the recurring themes of the issue, but it should take longtime readers back to a time where Wolverine was not yet the all-present mutant poster child, but rather that hero you almost felt unease to cheer for. An excellent character portrayal and revival.

Finally, there is a very interesting balancing act on timelines and structures, with Logan’s mind playing tricks on him, as memories of past allies and foes blend with illusions and the present time. It gradually introduces important elements of Wolverine’s psyche without feeling intrusive or expository… almost dreamlike in nature, with Logan being the person waking up, unsure of the dreams and life he used to have.

At the end of it, “Return of Wolverine” is as consistent of a full package as one can get, from name, to concept to execution. This is truly a return to form for this crucial characters, not only from the dead, but also from past interpretations that often diluted his core strengths. With an art style that automatically pulls longtime readers to a specific age of comics, updated with modern tools and design, this issue really hits the ground running.

Final Verdict : 8.5 – More than a return from the dead, “Return of Wolverine” pulls one of the best versions of Logan upfront to deliver an instigating story about loss, revenge and understanding of the self. The next issues cannot come soon enough.