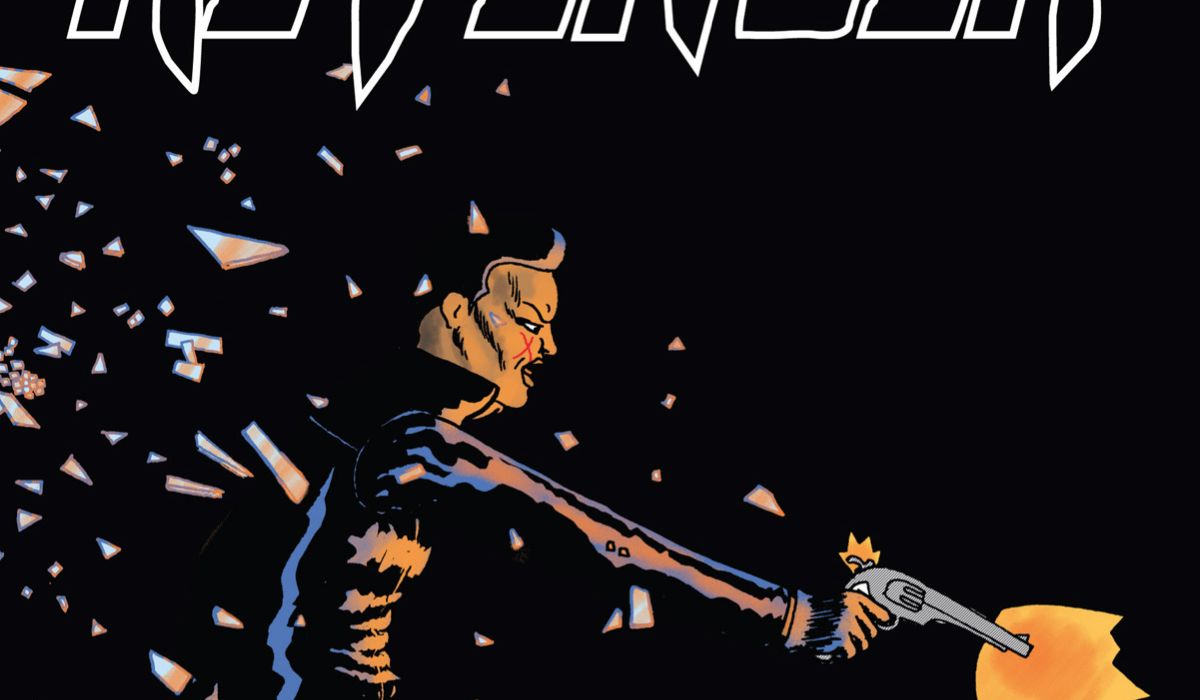 Hyper-violence is no stranger to funny books. Copious amounts of blood have been spilled on countless comics pages for nearly a century. I mean, it’s part of the reason we had the Comics Code, right? And through it all, there was a decade that was especially great for mass market brutality: the 1980s. It was the decade that characters like The Punisher and Wolverine came into real prominence, as they shot and battered their way through 24 action-packed pages a month. For comics fans of a certain age, these were the fires that forged their imaginations. This is where Charles Forsman’s “Revenger” begins. 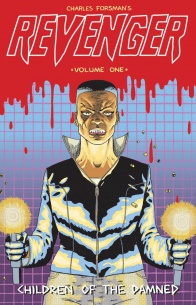 Written and Illustrated by Charles Forsman

When all hope is lost, and those that meant the most to you have been ripped away, there is only one moment left: the moment of revenge. Out of the darkness stalks a blood-soaked nightmare, cloaked with the scars of her righteous mission. In Revenger Volume One, the first collection of Charles Forsman’s self-published abattoir, those who do evil will find themselves faced, finally, with the hungry maw of justice.

I’m tempted to declare that Forsman’s “Revenger” is the best Punisher comic ever written, but I don’t know that that would be right. I mean, there are obvious parallels, but I think that sort of simple comparison would sell Forsman’s work short. There’s more at play here than just simple pastiche, even though that’d be an easy label to slap on the work.

“Revenger” feels like a piece of a larger movement that’s happening in comics. Cartoonists like Forsman, Ben Marra and Michel Fiffe are producing work that is directly influenced by gritty Bronze Age comics, each exploring the tropes and mechanisms of the era in their own unique ways. The resulting work leans on a certain amount of assumed knowledge on the reader’s part in order to spring forward into their storytelling. The immediate parallels that can be drawn between Forsman’s Revenger and 80s Punisher comics serves the artist well in that the reader is armed with everything they need to come along for the ride. Even if the presumed knowledge base isn’t especially deep, a character like the Punisher is so easily understood that you don’t need to remember, or even have read, specific stories to have what you need. The Punisher kills the worst of the worst, and that’s about all you have to come to “Revenger” knowing. I’m sure that a deeper familiarity with Frank Castle and his Reagan-era exploits wouldn’t hurt, but it’s unnecessary. Take me for example: the only clear Punisher memories I have are those Armory issues where he wrote love letters to all of his guns and I got along just fine.

Once readers have made the Revenger/Punisher association, all of the similarities between the characters are allowed to act as framework from which Forsman can hang the story he wants to tell. While it’s inarguable that this series probably started as a means for the artist to create his own high-octane shoot-em-up, it’s plain to see that there is more to it than just action. As a storyteller, Forsman seems drawn to the struggle and isolation of being a teenager, and the angst that comes with it. Even with all of the visceral entertainment on these pages, part of what drives the series forward is that someone took a kid seriously when no one else would.

The story opens with Revenger checking her messages. Actually, it starts with her killing clowns in what may or may not be a dreamscape, but that’s more of a pre-credits cold open than an actual start to the narrative. Anyway, it seems that anyone in need of her services can call 1-800-REVENGE, which is such a glorious way for Forsman to place his character in the midst of action without much wind up. It subverts the whole Death Wish dilemma in that we don’t have to worry about our ‘hero’ leaving vengeance to chance. Revenge should be sought, not happened upon, right? 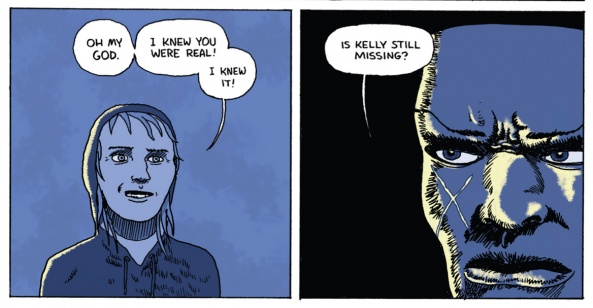 So Revenger gets a message from a kid named Eddy. It turns out that he’s desperate to find his missing girlfriend, Kelly, but no one will hear what he has to say. He knows her father has something to do with it, but it seems that no one believes him. Hearing his pain, Revenger takes the case and travels to Neptune, California, where she finds Eddie drinking alone.

Immediately I was struck by the presence of this sort of character in this type of situation, as it’s something that surfaces a lot in Forsman’s work. The immediate impression is that Eddy is alone in the world save for Kelly, as we never meet his parents. He’s outside of his home drinking and talking to a stranger with a huge scar on her face, but no one notices. He even just dropped his empty bottle on the sidewalk in front of the house, an obvious sign that there is no need to hide his actions. It’s a similar feel to Forsman’s past works like “The End of the Fucking World” or “Luv Sucker,” where the only adults who enter the narrative are either malicious or obstructive. The difference here, though, is that Eddy and Kelly have an adult who’s neither in Revenger. Collateral damage aside, she’s there to be a force of good in these kids’ life, helping when no one else cared to. This type of savior character is interesting, in that the past works cited earlier are completely lacking in that type of role. It seems to me that, before “Revenger,” Forsman’s interest has mostly seemed to be in seeing if his creations can be wholly self-reliant in a wold that does not care about them.

In comparing “Revenger” to Forsman’s previous works, his art is going to be the most dramatic difference. Before “Revenger,” I saw his art as being directly influenced by Charles Schulz. This came from the way Forsman drew his characters in profile, with bulbed noses and mouths that behave in much the same was as Charlie Brown’s. Even his lettering and word balloons showed how influential Schulz was on him, as exhibited by Forsman’s use of what I’ll call a ‘two-part tail.’

Schulz on the left, Forsman on the right

While his previous works were cemented in Schulz and what I’d consider classic American strip cartooning, “Revenger” is something else all together. With heavy influences from Frank Miller, Klaus Janson and Carl Potts, this body of work could pass as being from a completely different artist. Speaking strictly in terms of art, it’s as if Forsman has completely reinvented his approach. His linework is finer, with an almost wispy feel to it, which betrays the brutal nature of his narrative. He relies more on spotting blacks for these pages than what we’ve seen from him before. Where shadows used to be cast with hatching, Forsman now turns to solid, black shapes, almost as if he’s weighing down his scenes. Even his word balloons are different. Gone are the short, two-part tails, in their place we find long, slender tails that fit nicely into the overall look of the pages. And, of course, there’s the use of color, which I don’t believe I’ve ever seen Forsman use before, outside of covers.

For all of the differences between “Revenger” and the comics that preceded it, there are a few similarities that point back to Forsman. The easiest to see has to be the lettering, which retains a lot of the spirit of something like “TEOTFW.” Even though the linework in this series is drawing from a different well, we can still see the Schulz influence at play here. There’s a lack of fussiness in Forsman’s letters, as they fluctuate slightly in height and width. Nothing that’d make it unreadable or sloppy, but instead adds a bit of character to the material that can only be achieved when the artist’s hand is present. It’s a type of lettering that I think takes not only practice, but also a certain amount of confidence. It’s not easy to intentionally let hewn edges show, but in doing so Forsman has made the work all the more interesting.

In looking over the trade paperback of the first “Revenger” story, I think it’s worth calling attention to the book’s design, which Forsman handled himself. Part of what drew me to his work early on were the simple, yet striking, covers to his self-published “TEOTFW” mini comics. He did a lot with a little, creating a brand of sorts that’d make every issue immediately recognizable. So it’s not like anyone should be surprised by how nicely designed “Revenger” is, but instead marvel at the new elements Forsman is playing with. Again, full color is going to create a difference, but it’s how he uses it that’s worth observing. The end pages and inside covers of this trade are especially striking. One image of Revenger butts a large swath of burnt orange up against a powder blue mass, while the line work is printed in a violet that behaves differently when printed over the two different background colors. It’s the type of playing with color you’d expect to see in screen printing as opposed to modern book making, and I’m always a sucker for that type of stuff. Plus, speaking of being a sucker, there’s some slick spot varnish on the cover, which is something I’ll never not appreciate.

All in all, I immensely enjoyed Charles Forsman’s “Revenger.” It’s a perfect meeting of growth and nostalgia, as Forsman blends new artistic techniques with the types of story elements he knows so well, all while pointing back to what I’d assume to be the comics he enjoyed as a kid. If you enjoy this series, keep in mind that Forsman is in the midst of producing new issues as we speak. They’re available via his Patreon, where he’s also releasing “I Am Not Okay With This,” a monthly mini comic that is more akin to his previous works in terms of art style. You can read the first chapter of that one right here.