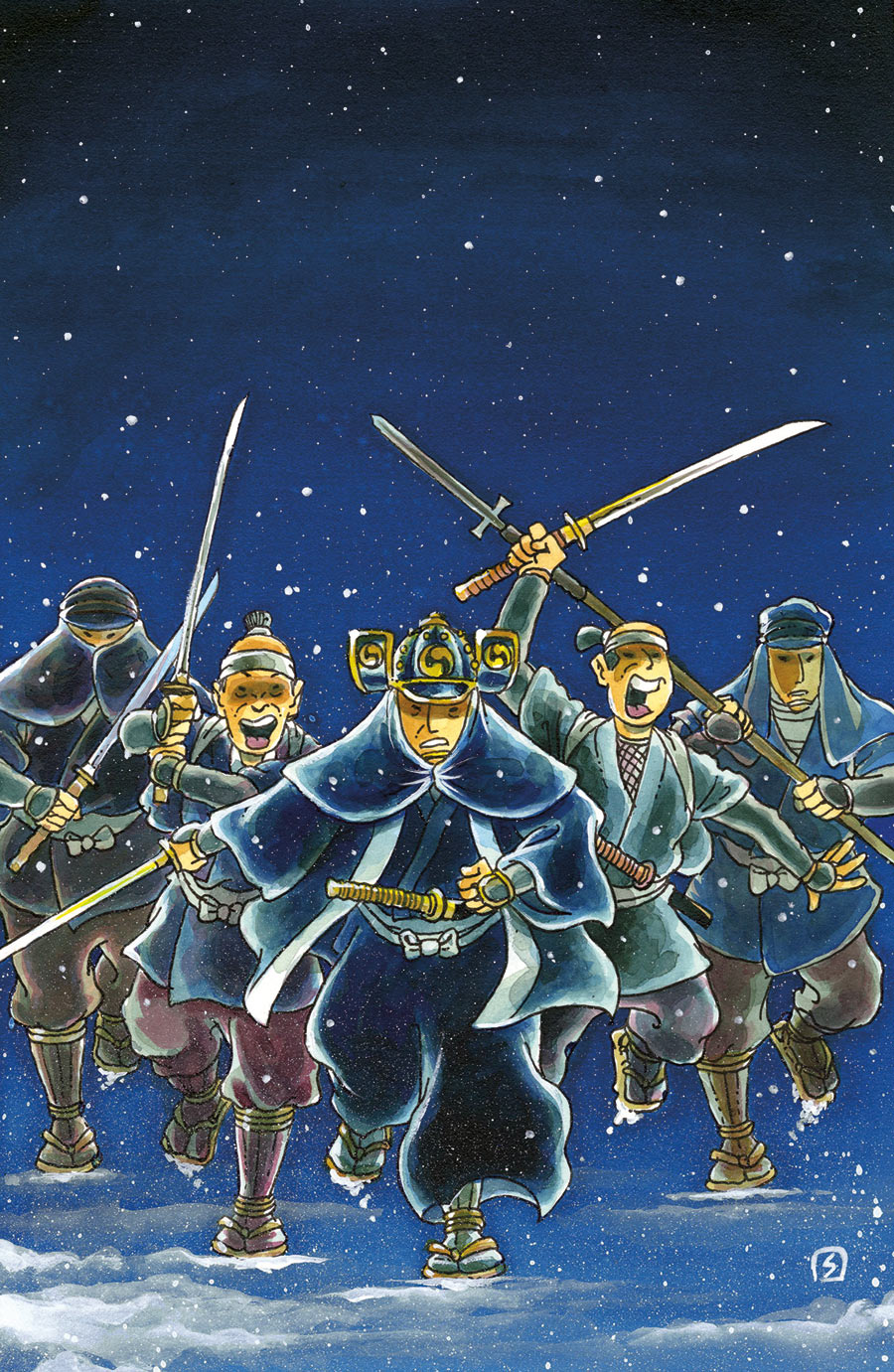 It all ends here: Mike Richardson and Stan Sakai’s complex rendering of the 18th century Japanese legend gets a tragic final chapter. 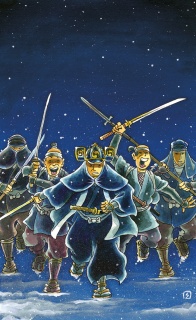 “47 Ronin” is an intricate and suspenseful legend, encompassing a good deal of planning and waiting on the part of the group of samurai who sought to avenge their master’s death. The four issues leading up to this point have been largely action-free, focusing on the political dynamics within and without the group of samurai and emphasizing, as the legend does, the persistence and patience involved in the vengeance plot. Now the waiting is over, and a good portion of this issue is wordless action as the samurai storm the home of Asano’s (effective) murderer.

It’s a bloodbath, of course, and a strong contrast to the issues which have gotten us to this point, but Mike Richardson’s script and Stan Sakai’s art keep to their fundamental principles in setting down a narrative which is subtle and detailed despite the violence of the events. Quieter and more doubtful moments step to the forefront in amongst all the carnage, with the samurai coming across as flawed individuals despite their unity of purpose.

For those familiar with the legend, of course, the end isn’t going to be any surprise; for those who weren’t, but have a general idea of samurai customs, it won’t be a surprise, either. But Richardson and Sakai portray even the starkest of events with a delicate touch, getting at the spirit of the samurai code of honour and its centrality to the proceedings. From the beginning, the group of samurai have refused to call themselves ronin; ronin were samurai who had no master, and this group still holds fealty to their lord. It is this sense of loyalty despite everything that shines through, even as a note of moral ambiguity takes hold during the final pages.

One of the most interesting aspects of Stan Sakai’s art over the course of the series has been the way that a vibrant, personal edge comes through, even as the compositions and overall aesthetic evoke the understated, “floating world” print style of the period. Sakai brings facial expression to the forefront, populating this story with all kinds of scowls and glares; at the same time, though, there’s that pronounced sense of distance, an emphasis on perspective that recalls the moral big picture. The dichotomy is a good match to the themes of the story – controlled, planned out, reined-in but eventually released vehemence is central to the legend and integral to its tragic ending.

The sequential storytelling, meanwhile, is clear and clean, setting out the sometimes quite complicated fight sequences with a great feel for the fast pace of events. Combine that with the emphasis on precisely-rendered period detail – particularly the complexities of armour and architecture – and this is one visually enthralling book.

Lovern Kindzierski’s colours have, throughout the series, matched the Ukiyo-e aesthetic beautifully, evoking the evanescent and translucent qualty of a woodblock print with subtle pastels and an absence of shadow. Here they’re more stark, with a blanket of snow standing in contrast to the dark clothing of the samurai, but Kindzierski’s purples and blues quietly get across the atmosphere and mood of a particularly fateful winter night.

All told, this is a fascinating retelling of a legend which has become an important reference point in Japanese culture. And in its vitality, its subtlety, and its sense of integrity, “47 Ronin” is a fitting tribute to a group of warriors who were never ronin.

Final Verdict: 9.0 – A great end to an engaging and accomplished series.