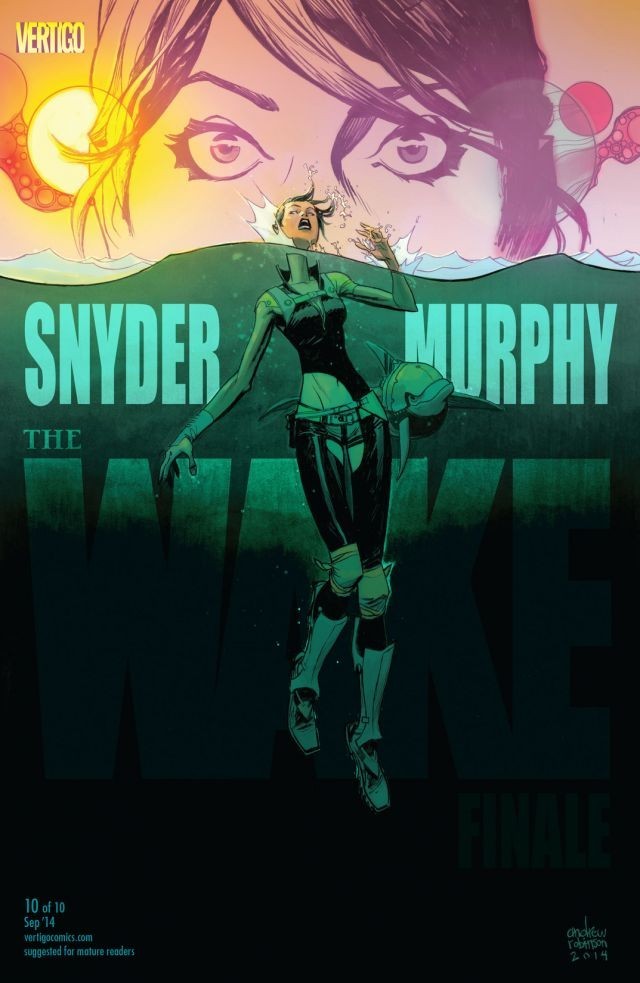 After traveling from the bottom of the ocean to the ships of the future, Scott Snyder and Sean Murphy bring their monster-mermaid miniseries to an unexpected close.

As a note, some spoilers for the issue are discussed (a bit unavoidably, due to the final nature of the issue). 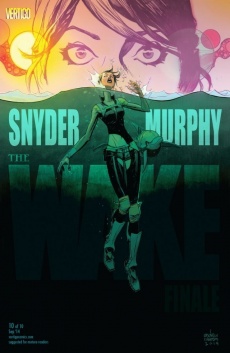 The series Buzzfeed called “the best horror comic of the year” and Comics Alliance rated “most unpredictable” and “uncanny and uncategorizable” comes to a shocking conclusion. Will Leeward uncover a history buried thousands of leagues beneath the sea – or will the waves come crashing down on what little land is left?

Even though it’s only been 10 issues from start to finish, “The Wake” has been a long and twisty journey. It began as a John Carpenter-esque horror story, full of claustrophobic terror and tension, before wiping out the entire cast of characters and jumping two centuries into the future. This expanded the story into a completely unexpected direction, and showed a rarely seen world where the monsters have already won. As the end nears, however, it becomes apparent the past is not so lost after all, and the fight against the Mers will not have an easy or simple conclusion.

One of the signature motifs in Scott Snyder’s work is events in the past having large and unintended consequences for the future. This occurs in “Batman” with the Court of Owls having an intertwined secret history in Gotham stretching back centuries, or when the Joker forces the Dark Knight to relive the most infamous moments of their history. Even the Man of Steel can’t escape the past, and has to deal with Wraith and his involvement with the US Military going back to World War II. As Leeward gets dragged deep into the ocean and she finds herself conversing with Doctor Archer, the protagonist of the series’ first five issues. It’s unclear at first whether it is a toxin-induced dream state, a glimpse into the afterlife, or just the lack of oxygen destroying Leeward’s brain.

With a turn of the page, that initial question is soon forgotten as suddenly an alternate creation myth for humanity unfolds. If the time jump into the future seemed like ambitious storytelling on Snyder’s part, that’s nothing compared to the forgotten history of mankind that plays out. It’s a retelling of humanity’s origins, from ape to astronaut, with which brings the revelation that humans are the results of a Prometheus-esque world seeding, and that the Mers are the original inhabitants of Earth.

I think. To be perfectly honest, I’ve read this thing several times and still am not entirely sure what happened. It gets even more complicated, and to Snyder’s credit, he keeps the deluge of information from feeling totally overwhelming, but it’s still a lot to digest. There is more exposition featured in this issue than in any other installment of “The Wake” and it flows surprisingly well. This did not seem like the kind of title that would grapple with such subjects, but Snyder has been sure to plant seeds and expand the world little by little, so any notions of this being a standard horror story should have been dispelled several issues ago.

A huge component of what makes the compressed retelling of millions of years of recorded and unrecorded history go down so well is the amazing artwork from Sean Murphy. This guy can draw anything Snyder throws at him. It’s hard to believe the first half of this is made up predominately of pages and pages set inside an underwater ship, while now Murphy has penciled an entirely new version of the world. To put it bluntly, this issue features an image of the Great Sphinx of Giza with the head of a Mer, and it’s so badass it should be the cover of a metal record. The extended flashbacks are broken up between regular panels and big splash pages, and both provide detailed snapshots of this forgotten history. Murphy managed to get Ancient Egyptian Pyramids, Roman Emperors, Nazis, and rocket ships onto one page and it’s fantastic. Seriously, guy can draw everything.

Despite the creation myth taking a big chunk of time, there is still plenty happening in this issue. Snyder is a master of pacing, and spreads out the expository flashbacks throughout the issue while allowing Leeward’s fight with the Governess to reach its conclusion. The Governess has been a classic dystopian villain, who seeks only personal glory to the determination of the surviving population. In that respect she has seemed a little too familiar up until this point in the series, so it was nice that she got to reveal some unexpected depth before the story reached its end.

This is when “The Wake” takes what maybe is its biggest twist at all, and delivers a happy ending. What started as a fun little horror series culminates in the triumph of hope over the forces of oppression. The Mers themselves, the creepy hook that brought many readers to the series, actually have very little to do with the events that occur in Leeward’s final battle. It’s not bad, just a big difference from what most probably assumed would be the series’ trajectory after the first issue. Snyder’s writing never comes out as sanctimonious or preachy, and he manages to work in several small character moments that add more layers of emotion to the ending even as giant explosions occur.

Even with the big showy flashback taking up ample page time with great art, Murphy doesn’t forget to bring the goods when it’s time for a good old fashioned shootout-on-an-exploding ship. His sharp and angular lines have proved to be perfectly suited to creating fierce looking machines, and the future here still looks dangerous and dirty. There is another gorgeous splash as the hereto unknown alien (maybe?) ship rises from the water and dwarfs the Governess’ vessel, which nicely plays into the greater theme of the series: that there’s always something bigger going on under the surface. The art plays a big part in the surprising tone of the conclusion, as Leeward sojourning across the wave towards the next adventure as Mers ride the waves alongside is the most uplifting image in the series.

“The Wake” has been about twists and turns from the very beginning, even when it comes to its own genre. Scott Snyder and Sean Murphy are a great team, and they have included a surprising amount of depth (no pun intended) in this horror story that it is surely destined for further success in trade format. The ending is exciting and unexpected, which seems to fulfill goals of the series to the letter.

Final Verdict: 9.0 – Not the ending anyone expected, which is what makes it such a good read.