If there’s something weird in Metropolis, who ya gonna call? Superman! 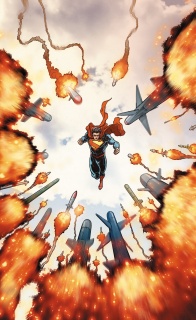 Following the events of FOREVER EVIL, Superman confronts Lex Luthor – but the world has turned around for these two. The hero has become the villain and the villain the hero as forces beyond these two gather to destroy the Man of Steel, beginning with a dormant Doomsday who has crossed over from the Phantom Zone!

In just five issues, Greg Pak and Aaron have managed to pull “Action Comics” out of a tailspin. The victim of unforeseen creative changes behind the scenes, the series did little more than tred water for several issues, and essentially piggybacked of the main “Superman” series, until the new Pak/Kuder duo could ready their first issue. Now that their initial arc is complete, the team are readying the first crossover under their watch, as Doomsday escapes the Phantom Zone to threaten the world again.

The issue opens in the frozen Arctic wasteland, as the freed Doomsday takes out not one, not two, but three polar bears. An unseen pair narrate the events, and seem to responsible for the villain’s escape. They watch him break apart an entire iceberg and dive into the sea, taking a few civilians with him, and swim away into the darkness. Meanwhile, an angry Superman flies to the Alps dragging Sawyer, the Ghost Solider, with him. Superman attacks Tower Control, where a shady military branch of have found a way to use the ghosts of dead soldiers as weapons. Superman is bent on bringing down the tower, but he has to contended Harrow, the group’s mysterious leader, and her seemingly vast supernatural powers.

The idea to have actual ghosts fighting Superman might seem a bit implausible, even by comic standards, but it is a little arbitrary to say that in a world of flyings gods and cosmic warriors that one’s suspension of disbelief ends at a dead spirit or two. Greg Pak is able to make the concept work by writing Superman so that he not only accepts the reality of ghosts, but he actually cares about them as well. Superman’s defining trait, other than his magic disguise glasses, is his unending compassion for anyone and everyone. He will try to redeem his worst enemies time and time again. The fact that his enemies are ghosts does give Pak some wiggle room to write the character as a slightly more vicious, but once he catches wind of their suffering he doesn’t want to hurt them anymore than he has too. The confrontation with Harrow is scripted fairly well, even if it does return to the familiar idea that Superman can’t make hard decisions. It is interesting to note the he wins the fight not with his brute strength, but by actually refusing to fight. In the hands of other writers Superman far too often becomes someone who solves problems by punching things harder and harder, but Pak highlights the characters intelligence and pacifist tendencies.

This issue has to serve two purposes as an ending point for the previous storyline, while crafting a prologue to the coming “Doomed” crossover. The bookend scenes are thrilling, despite the fact that they have nothing to do with the rest of the book. Thankfully they are kept to a minimum, a tease as opposed to a subplot. Pak uses them to establish that Doomsday is still super tough, and has adapted to a different form then what Superman has fought before. It is certainly enough to peak the readers interest, and Pak was able to avoid making the scene shifts be incredibly abrupt and jarring.

“Action Comics” #30 has three different credited artists. The Doomsday bookends are handled by guest artist Karl Kerschl, while Jed Dougherty assists regular penciler Aaron Kuder. One of the things that makes the Doomsday scenes so enjoyable, despite their lack of plot contributions, is that they are just gorgeous to look at. Doomsday was a character indicative of an era when muscle-bound, gritty characters were super hip, but Kerschl managed to tone down some of the characters more ridicules proportions. The closing underwater scene is particular breathtaking, and if no one at DC is looking at Kerschl to pencil “Aquaman” in the future, than they really should be.

In the main story, Kuder and Dougherty split the artwork and, while neither is truly bad, they do look markedly different. They have clearly made an effort to keep similar styles, it’s hard not to notice when Superman’s head looks completely different from panel to panel. Superman’s hair shouldn’t be attention grabbing, but when it magically morphs from crewcut to shaggy, it does become an unfortunate distraction. The ghost fight looks great, especially when Superman fight a ghost elephant. The moment when the spirits are finally free of Harrow’s control and leave for parts unknown is unexpectedly moving, while the appearance of Harrow herself is appropriately ghoulish.

“Action Comics” #30 functions primarily as a transitional issue between story arcs, and as a result remains not strictly that important to either. The story is still solid, if a bit familiar with its ‘Superman is too soft’ argument. The art is very good, it’s just very easy to tell that three separate artists had hands on the issue. The book is successful in raising interest in the “Doomed” crossover, but it’s in-between status prevents it from reaching the heights of Pak and Kuder’s first story arc.