Just last week, another Brian Bendis-penned introductory issue (“Guardians of the Galaxy”) was released by Marvel and some, including yours truly, felt it was an unnecessary issue, especially in the wake of Marvel’s 2012 “Point One” issue, which featured a truncated version of the same story. However, that story had a lot of charm, heartbreak, and spunk to it.

While reading “Age of Ultron” #1, three thoughts kept pushing their way into my brain, almost to my annoyance:

1) What a waste of Bryan Hitch’s talent.

2) What a typical Bendis comic.

3) This is totally Marvel’s “Flashpoint.”

One of those is sad, one is expected, one is downright terrifying. And also, Marvel teased this back in 2011’s “Point One.” 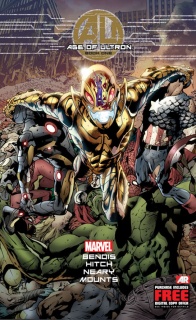 For years the heroes of the Marvel Universe have lived in fear that the artificial intelligence known as Ultron would one day evolve to fulfill its desire to wipe out all organic life and take over the Earth — that day has arrived. This massive 10-part Marvel Universe-spanning event is brought to you by Eisner award-winning writer Brian Michael Bendis and comics legend Bryan Hitch.

A pretty good way to measure a comic’s success is to imagine it written and drawn by total unknowns. Pretend that a young, hungry writer and a fresh-faced penciler walk into the Marvel offices and wow the brass enough to get their shot at doing a comic. You’ve never read or seen any of their work, so you’re going in totally blind. If theirs is a book that you would buy another issue of, the book is really something special; they have managed to keep your attention for 20 pages or so, and you want more.

That scenario is pretty damning to this comic.

It is almost impossible to overstate what happens in this book – a jaded Hawkeye shoots some people to rescue a friend, argues with other friends. A healthy dose of dystopia is added to the typical post-disaster character redesigns (haircuts, scars, darker colors), and we see a bunch of costumes in tatters. Am I missing anything at all?

This is a $3.99 event comic – this is a book that Marvel is so proud of that it is still being released months late, throwing a wrench into Marvel NOW! like that weird guest who won’t leave the party and is still hanging out the next day. This is a relic of the Bendis-era “Avengers,” an era that undoubtedly produced some of the most acclaimed and successful Avengers comics of all time, but an era that Marvel has spent the last three months trying to distance itself from. This is a book that will “change everything” (again).

And yet, this feels familiar to the hilt. From the drab color scheme to the predictable tropes, everything about this comic has been done, both better and worse, before. One of the joys of Marvel NOW! has been that many of the more successful books feel like a totally new take on classic characters. “FF,” “New Avengers,” even the sub-par “Superior Spider-Man” all feel like fresh takes on familiar ideas. This feels like a retread of a retread of a retread. Plus, it is boring! Bendis takes forever to illustrate points you get a few pages in, and there is precious little to chew on after you’re done reading it.

Earlier, I compared this to “Flashpoint,” which itself was a pastiche of previous big events. But even “Flashpoint” had a central character to hang your hopes on, and to act as your proxy in this slightly off-kilter world. Here, you are thrown directly into an unfamiliar (but all too familiar) setting, trying to figure out exactly what is going on (even though you totes already know). This is almost a winking take on what an event comic feels like, except it is presented entirely devoid of self-awareness.

Poor Bryan Hitch; one of the most talented pencilers in the business is marginalized to a mere footnote here. Hitch isn’t the type that thrives drawing street-level crime, and so the bulk of this issue finds him outside of his comfort zone. The couple of big spreads of Ultron madness are gorgeous, and the “ground shaking” technique used in “Point One” is back here, and used to great effect. There’s nothing wrong with Hitch’s work, it just isn’t a great showcase for what is a great artist.

This book feels undercooked, and yet it has been in the works for at least three years (we interviewed Bendis back in January 2010 and he dropped a hint then!). I know we all have event fatigue at this point, and so these events are judged more harshly than, say, a decade ago. But unless you are buying this comic based on the reputation of the names on the front cover, rather than the contents inside the covers, this has to be a disappointment to you.

Now, Bendis and Hitch are talented enough to fix some of these issues down the road in the series, but that just doesn’t seem likely to me. Bendis is, as discussed ad nauseum elsewhere, the king of decompression, and so it should surprise no one that he is in no rush to tell this story. This is a stereotypical Bendis comic – a seven page story that takes an entire issue – but doesn’t have any of the charms his books usually have. Everything about this comic falls flat. Everything.

If the “Flashpoint” comparison winds up being true, in that this book makes some major (and long lasting) changes in the 616, then shame on everyone involved. Marvel is on such an incredible roll right now with their Marvel NOW! initiative (one that this author preemptively mocked on more than one occasion) that it doesn’t need another shakeup right now. In fact, half of the NOW! pitch was the end of shakeups (a claim that has been hilariously ignored)! So, to promise more shakeups, from the architect of a bygone era, in the guise of an egregiously delayed book, is a slap in the face of Marvel NOW! For once, I am hopeful that the “everything will change!” tag is bullshit, as opposed to every other event, when promised changes falling short are a disappointment.