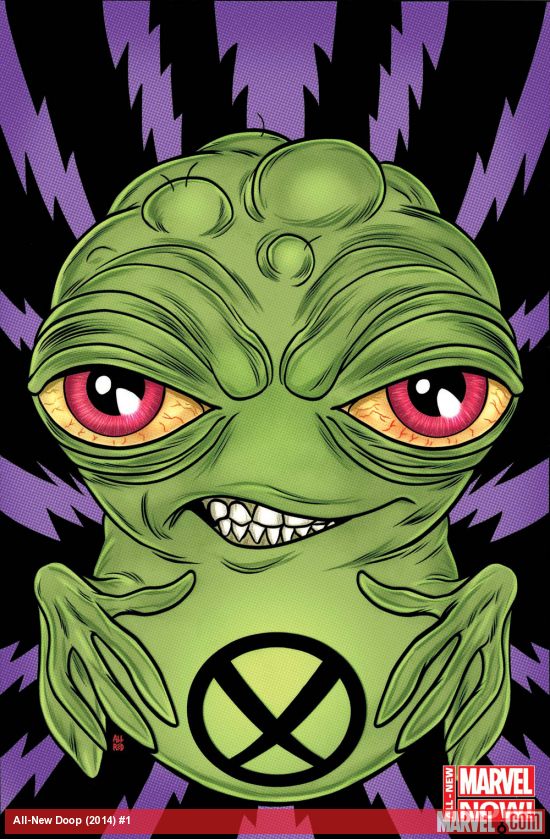 Doop. We know him. We love him. We’ve all woken up to him after a wild night. Now, Marvel’s greatest mutant gets his own solo series with “All-New Doop” #1! Will this title give us some insight on the mysterious green blob? And more importantly, is that something we could  handle? 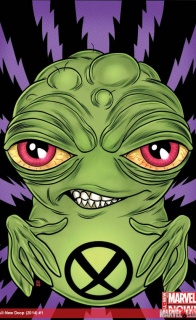 Living in the margins of the X-Men, Doop has freaked out X-Men and readers alike. However, when he gets deeply involved in X-Men business (and in the personal life of Kitty Pryde!), Doop will be thrust into the spotlight. This adventure will prove that Doop is, in fact, the most powerful X-Man! Written by co-creator Peter Milligan (X-FORCE), covers by co-creator Mike Allred (X-FORCE, FF) and innovative interior art by David Lafuente (AVENGERS, ULTIMATE SPIDER-MAN)!

The comic book community is critical, to say the least, to its characters. Even the most beloved, the Batmans, the Spider-Mans, the Aqumans, will have a vocal contingent of fans declaring their disgust with these heroes. Yet somehow, back in 2001, Peter Milligan and Mike Allred created a legend and the only character in comics to have literally no haters. I have not heard of one single person who has not been in love with Doop, to the point where he’s basically become the Marvel version of the Old Spice Guy (Speaking of which, Doop replacing Isaiah Mustafa as the Old Spice Guy in the Marvel Universe sounds like an incredibly plausible scenario.) Set against the backdrop of last year’s ‘Battle of the Atom’ storyline, “All-New Doop” has the titular ploop flying around the narrative of ‘Battle’, fixing up plot holes and hitting on Kitty Pryde.

Mike Allred’s not on hand to illustrate his genius creation, but David Lafuente does an acceptable job here. His Doop is actually very different from Allred’s, in tone not in shape. It’d be really hard to make Doop a different shape. Doop here looks more like a children’s cartoon character rather than the diseased lump of womanizing doopstuff we know and love. This does make Doop stand-out from his fellow X-Men who look as normal as you can expect, and definitely inspires the sense of “other” that makes Doop so appealing, but this cuteness might be off-putting for some fans. Artistic choice on Lafuente’s part or an effort by Marvel to ensure that Doop can appeal to a mass-market? #HashtagYouDecide

Doop’s aesthetic tameness also applies to his actions in this comic. Though there’s a lot done in terms with playing with narrative (and Lafuente does some really neat work with the panel borders), Doop is reduced to cleaning up the events of ‘Battle of the Atom.’ Now, if you did not like ‘Battle of the Atom’ (as a hella amount of people did), “All-New Doop” might not behoove itself to you. Hell, I liked it but I didn’t feel the need to re-read it.  The “alterations” Doop makes to the story are very minimal, and though Doop’s dedication to making sure everyone’s okay is as admirable as it’s always been, he takes a backseat to a comic from August 2013. I expected “All-New Doop” to be weird, but not mind-bogglingy faulty. The story gets better as time goes on, Doop manages to wrangle back the narrative towards the end of the issue leading into what is, no joke, the most disturbing scene with Doop I’ve ever seen. It’s not what you expect and you really can’t prepare yourself for it, but it is genuinely mind-blowing. I’ve never seen anything like it, and neither have you.

Even after all the development this character has received over the years (Filming X-Statix, joining the Jean Grey School, getting an ongoing series), Milligan finds something new in Doop that turns around a late ‘Battle of the Atom’ tie-in into a promising experience. If you are a Doop fan, the final page makes this comic a guaranteed “must buy” if only for the purpose of seeing where Milligan takes Doop next. That said, if you did not like ‘Battle of the Atom’ and would really just like the focus on Doop (you know, like the title implies) then you may want to wait a bit. The story seems like it’ll spend less time being a retread of a pretty forgettable arc and more time on the actual title character as it moves along, but this issue isn’t that movement. I can see it coming together really well as a trade after all five issues have been released, but it’s a little disappointing at the moment.

Final Verdict: 6.3 – Browse with a potential for buy when all’s said and done.