James Robinson and Steve Pugh give Marvel’s Golden Age a makeover in “All-New Invaders #1!” Read our spoiler-free review below! 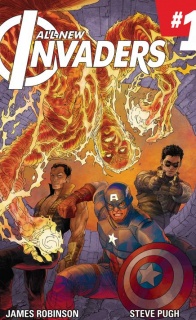 “GODS AND SOLDIERS” PART ONE
• Eisner Award winner James Robinson (STARMAN, EARTH 2) returns to MARVEL, uniting with Steve Pugh (ANIMAL MAN, HOTWIRE, GEN-X) to create a unique, modern day take on the INVADERS.
• The KREE EMPIRE intends to conquer the universe using a weapon that will grant them an army of NORSE GODS.
• It falls to four heroes united by their past—CAPTAIN AMERICA, NAMOR, THE ORIGINAL HUMAN TORCH and the WINTER SOLDIER—who must now face the future and wage war against the Kree to save Earth.

It’s interesting to note that, for the longest time, DC was the company known for its utilization of characters from the Golden Age while Marvel has always focused on characters from the 1960’s and beyond, with The Golden Age being a vague mystery punctuated by Namor, a Human Torch who had nothing to do with the Fantastic Four, Bucky, Captain America and his dozen impersonators. Aside from a pretty good “Patriot” series a couple years back, Marvel’s Golden Age has always remained in obscurity, especially when compared to DC whose Justice Society was one of its most popular titles. That could be chalked up to the reboot in the 90’s which led to DC focusing more on legacy heroes, until the New 52 turned everyone into young bachelors with plastic armor. So now that there’s a space in the Big Two for Goldgen Age heroes, its’ only natural that Marvel would want to fill that space. Even better, that initiative is being led by James Robinson, the man who made the Justice Society one of the most important DC properties before and after The New 52. Though it’s probably too early to call whether “All-New Invaders #1” will have the same impact as “Starman” or “JSA” it’s clear that Robison and Steve Pugh are on their way to sucessfully revamping one of Marvel’s most obscure teams.

Though in fairness to The Invaders, the members are hardly obscure (two are titular characters of the upcoming Captain America: The Winter Soldier and posters of the shirtless Imperius Rex adorns the walls of the Multiversity Offices.) The exception though, would be Jim Hammond, The Human Torch who pretty much everyone forgets about. Here, he’s made the audience POV. Half because he’s the relative outsider and half because someone needs to deliver exposition dumps (Did you guys know there was a crossover where Jim Hammond betrayed a bunch of robots to save humanity? Me neither!) Through Hammond, Robinson is able to paint a portrait of a compelling character who’d really rather not jump back into the fight after he’s found a new peaceful way of life. In a lot of ways, Hammond represents the soldier from World War II reluctant to be dragged back into the action and though, it may occasionally hit the reader over the head, “All-New Invaders” is rife with references to the WWII.

To be fair, The Invaders were a team built entirely around WWII (Hammond was even the one who killed Hitler) but Robinson refuses to let that utterly define the characters, while at the same time offering a blockbuster parallel to The Cold War. The Kree, who in a genius twist have been cast as enemies after the unsteady alliance in “Infinity” (i.e. The USSR) and now the old heroes from World War II have to fight back against the traitorous alien empire to keep them from controlling the Norse gods which is like the third most metal sentence I’ve ever typed. Not only is this a great new direction for the team, but this story is still entrenched in The Invaders’ roots as they deal with hidden events from the 1940’s.

Of course, the Kree-Cold War aspect isn’t just beneficial to the plot but to Steve Pugh as well who draws one hell of a sci-fi blockbuster.Pugh moves seamlessly between small-town America, the Kree home world, to the mad science labs of the second World War all while delivering some impressive action. Pugh’s a versatile artist who illustrates the varied settings with incredible ease and even does a bit of experimentation in the sequential storytelling, notably the action scene in the barn which has a great sense of timing and motion. With Pugh, “All-New Invaders” reaches from the past and grasps firmly onto the modern in its aesthetic.

Though it may be too early to say if this’ll revitalize Marvel’s Golden Age heroes in a way Robinson did with the JSA, or if that’s even a mission statement here, it’s fair to say that Robinson and Pugh deliver a great blockbuster that, in it’s first issue, is only missing a bit more Namor.

Seriously. That Atlanetean can Imperius Rex me up anytime he wants.

Final Verdict: 7.6 – Buy! A great blockbuster and a great Marvel debut for Robinson.