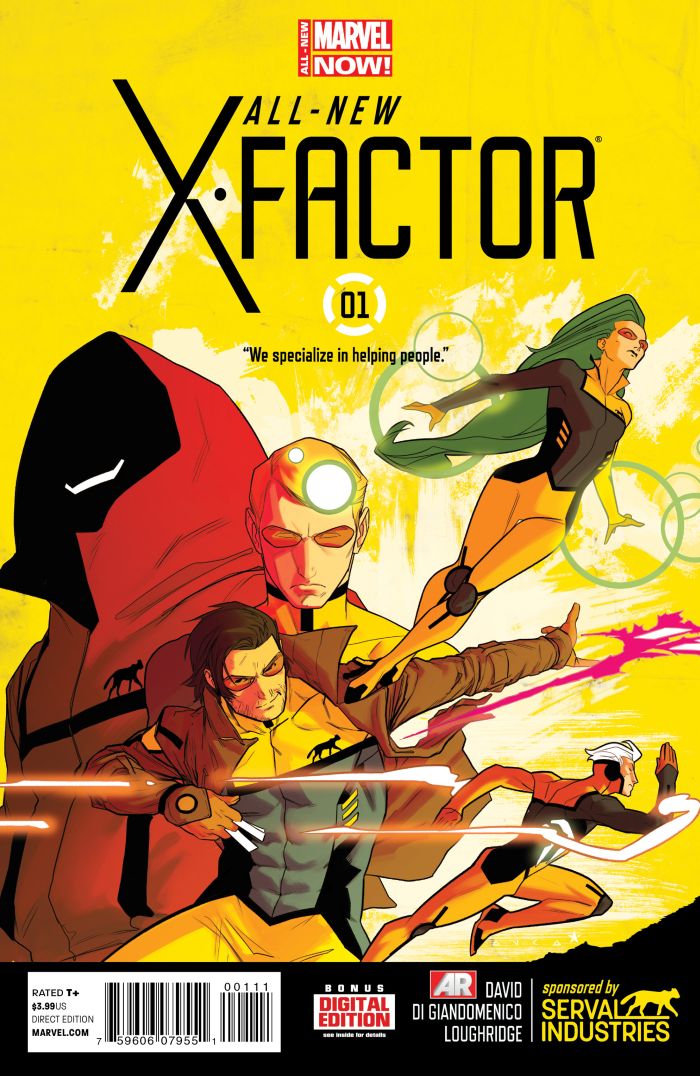 Reviews
Peter David, unstoppable river he is, begins yet another new era of X-Factor with Carmine Di Giandomencio in “All-New X-Factor.” Can David and Di Giandomencio create  a new X-Factor for a new era? Short answer: Yup. Read our review for more! Mild spoilers ahead,Cheri! 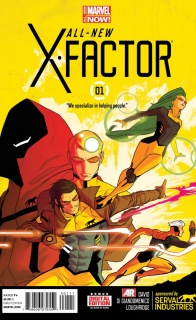 X-FACTOR IS BACK…LIKE NEVER BEFORE! Serval Industries, one of the world’s most trusted names in electronics and leader in cutting-edge internet and weapons technology, has just unveiled their newest contribution to society…the All-New X-Factor. Led by mutant mistress of magnetism, Polaris, the team uses its corporate backing for the betterment of society. With her half-brother Quicksilver, notorious thief, Gambit, and more by her side, can Polaris trust that her corporate masters really have good intentions?

Peter David has been writing X-Factor in some form or the  other for longer than I’ve been alive. That’s pretty insane, considering how we now consider 40 issues of a comic as “a sizable run” and what’s more crazy is how “All-New X-Factor” proves David still hasn’t lost any steam. Chalk that up to his knack for inter-team dynamics. Sometimes it feels like superhero teams are built around the idea of the character’s practicality on a team taking priority over how well the character’s interact. David’s a natural for creating teams that have instantly engaging dynamics and “All-New X-Factor” is no exception.

Though the team itself is hardly fully assembled here (as solicitations have spoiled there’s even more characters to come) the rapport between Gambit, Polaris and Quicksilver is interesting and marks the first time I’ve actually enjoyed reading a Gambit-centric comic (especially since Gambit’s cajun chahm doesn’t run amok.) Additionally, Polaris serves as an intriguing leader of the new X-Factor, at odds with Quicksilver. The new Serval Corporation is ringing every alarm on the “Evil Corporation” soundboard, but if anything they seem to be a new take on that trope. As I mentioned before David’s character work takes priority over the main plot which, while seemingly reduced, seems like it could be pretty interesting (though the twist reveal caused me to take a quick dash to Wikipedia.) I will note that the dialogue isn’t perfect as a scene or two seem to take a huge stretch when it comes to the characterization.

I honestly think this one scene could have worked better if only tweaked a little, but the scene where Gambit is sitting at a bar after he trashed everyone in it for making a Pat Robertson comment about Katrina in 2014 might win the award for “craziest scene of the week.” Maybe because of the suddenness in which it occurs, In Media Res. Carmine Di Giandomenico does a good job with this scene, especially in terms of showing the aftermath of the fight. He also does a lot of interesting exploration with the layout (shout-out to the opening break-in scene) but some panels seem to have lost some detail (especially with Polaris who swaps back and forth between wearing goggles or having straight up bug-eyes.) In spite of the recurring flaw with the faces, I will give credit in saying that the sleek All-New X-Factor costumes with the Serval decal are some of the best redesigns I’ve seen all year. Or I would if the year were more than a week old but beggars can’t be choosers. Still, compared to the hideous costumes some characters (coughGambitcough) start the story with, they’re incredibly stylish and a good indication of where this series is going.

“All-New X-Factor” is really taking its title to heart. If you’re a fan of the “X-Factor Investigations” era, then be prepared for the fact that this series is an entirely new beast. Compared to the Madrox agency, there’s a heightened sense of nobility here, even if they are working for a potentially evil corporation. In a lot of ways, this could be seen as a tonal merger between the two previous series. With the authority of the Pentagon-era team merged with the rapscallions/privatization of the Madrox-era, David and Di Giandomenico have ensured that this will not be a repeat of previous work. So, if you’ve never read any of Peter David’s “X-Factor” this is a good place to start. Though you might be confused on certain details, this is a relatively clean jumping on point. Not all the pieces seem to be in place, and though I’m going to refrain from a straight up “THIS X-Factor is better than THIS X-Factor” ramble since this series has only had one issue released and we’re not trite, “All-New X-Factor” is definitely a work-in-progress. Could it become great? Oh most definitely. But it might be a little bit of time for that.

Bonus: Shoutout to Kris Anka who is absolutely killing it on the cover.

Final Verdict: 6.8 – Browse but definitely keep on your radar. Buy if you’re already an “X-Factor” fan and want the continue the magic.