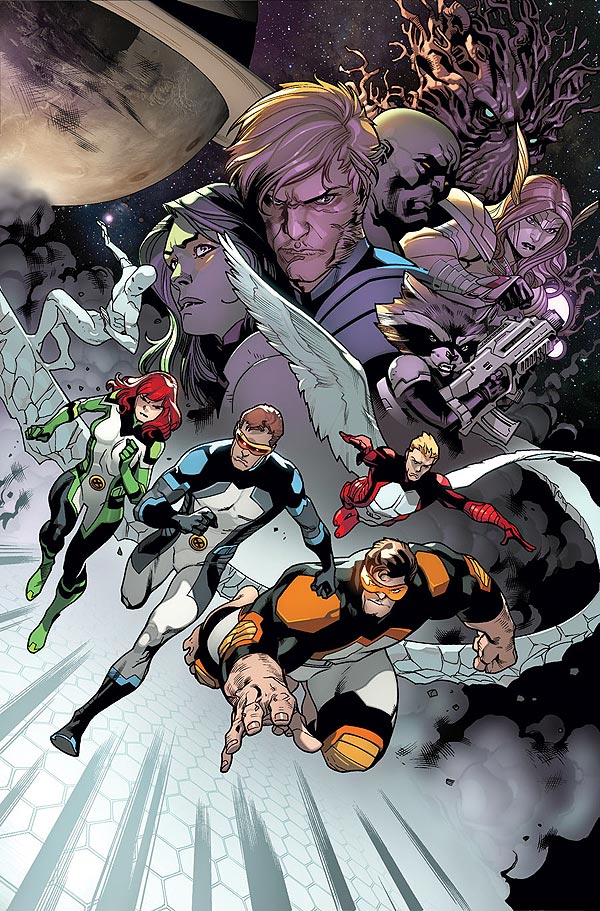 A new chapter begins for the original X-Men, as Jean Grey faces interplanetary consequences and the mutants receive help from an unlikely galactic ally. 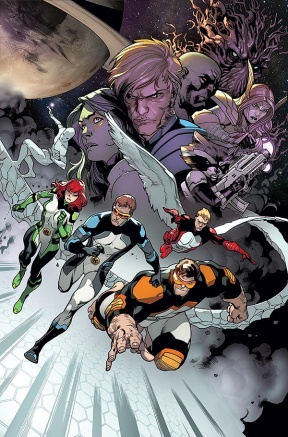 The arrival of the original X-Men in the present sent shockwaves through the Marvel Universe, but we’ve only seen the effects on Earth. When alien races learn that Jean Grey, host of the destructive Phoenix Force, is back on earth, they do something about it. Now it’s up to the rest of the All-New X-Men and the Guardians of the Galaxy to save Jean Grey from twisted intergalactic justice! Don’t miss two of Marvel’s biggest franchises crossing over for the first time!

It’s been a bumpy road for the original five X-Men. After being brought into the future as a wake up call for their present-day selves, the O5 were fought over by Wolverine and Cyclops’s rival schools until a way to return them to the past was found. But after another attempt at time travel failed, the teenage mutants appear stuck in the present, and after unlocking the full potential of her psychic powers, Jean Grey knows far too much knowledge of her own destiny.

Finding out that you are destined to die at young age is bad enough, but having said death occur after you’re possessed by an intergalactic entity that turns you into a nearly omnipotent being the unleashes waves of destruction across multiple worlds is more than a handful. After the other X-Men tried to keep her in the dark, Jean Grey gained knowledge of nearly a half century of comic book history in an instant. This issue begins in the aftermath of this revelation, with a particular tense lunch in the cafeteria. Jean deals with her problems the way most teenagers do, by not dealing with them at all, and Scott goes into full boy scout mode. Meanwhile, Iceman stumbles across an attack on the perimeter of the school, but it soon becomes clear that they have one very specific target in mind.

Brian Michael Bendis is firmly entrenched in the X-world by this point, and he feels comfortable to take the team on a good old fashioned space adventure. But first, there has to come the setup. Bendis wrote teenagers that feel almost exactly like real teenagers, i.e. annoying. What proves that Bendis is a great storyteller, is that the reader understands why the characters are acting the way they are. Jean is 18-ish, and suddenly has the weight of multiple worlds on her shoulders, along with the fates of her closest friends. So she gets a little pouty, it makes sense. The way Bendis writes young Scott is perfect, he’s a mini-Captain America, and exactly the type of guy Wolverine would pick on.

Since this is a Bendis book, there are plenty of the author’s trademark humorous moments and pop culture references. The issue opens with Iceman playing in the snow singing a RUN-DMC song which, depending on how the reader wants to interpret the timeline, means that he likes either top-40 hits or retro classics. The tense cafeteria scene with Jean and Scott features Angel literally stuck in the middle, just trying to enjoy a burger. It’s like every overdramatic argument that ever happened in high school, but with superpowers. It’s those moments that make the book very enjoyable, to the point it’s easy to miss that two-thirds of the issue is all set up, followed by a surprise action scene.

Stuart Immonen maintains his place as regular “All New X-Men” illustrator, which has largely been spared from the frequent art change of Marvel’s frequently shipped books. The stability behind the scenes has allowed the book to have a consistently evolving style, which has grown with the characters. If a new reader picks up this book, whom the .NOW number designation is designed to attract, they will hopefully notice how in control the art appears. There are no weird panel to panel changes, Scott’s chin does’t reshape itself and Angel’s nose doesn’t repeatedly change size. And the way Immonen draws Iceman makes him look like the most happiest mutant in the whole wide world.

The issue culminates in a surprise attack on the school’s makeshift headquarters, which nicely breaks up the teenage angst. The dialog informs the reader that the attacks are Shi’ar, an alien adversary the X-Men have tangled with before. While this might conjure up images of the bad guys from Halo, what ends up on the page is a group of nondescript soldier types in all black gear. It doesn’t look bad, and seeing the O5 unleash their mutant powers is always exciting, it just feels like there could have been more done with that particular sequence.

“All New X-Men” #22.NOW is the start of a new story, and marketed as a great jumping on point for new readers, and in that respect it is largely successful. The main personal conflict is set up, and there are enough character moments to endear them to the reader, but to be honest the opening recap pages featured in every issue conveys much of the same information. Brian Michael Bendis fills the issue with enjoyable moments, and makes the fact that is mostly setup less noticeable, and Stuart Immonen can draw this world inside out. There clearly is a larger story at play, obvious from just the title of the arc and the fact that the hyped crossover “Guardians Of The Galaxy” amounts to a one page appearance. The Original Five X-Men haven’t been able to find a suitable home on earth, maybe they’ll have better luck in space.

But again, the title proves they won’t.

Final Verdict: 7.5 – An enjoyable issue from the great Bendis/Immonen creative team, and should make the readers hungry for the larger story.