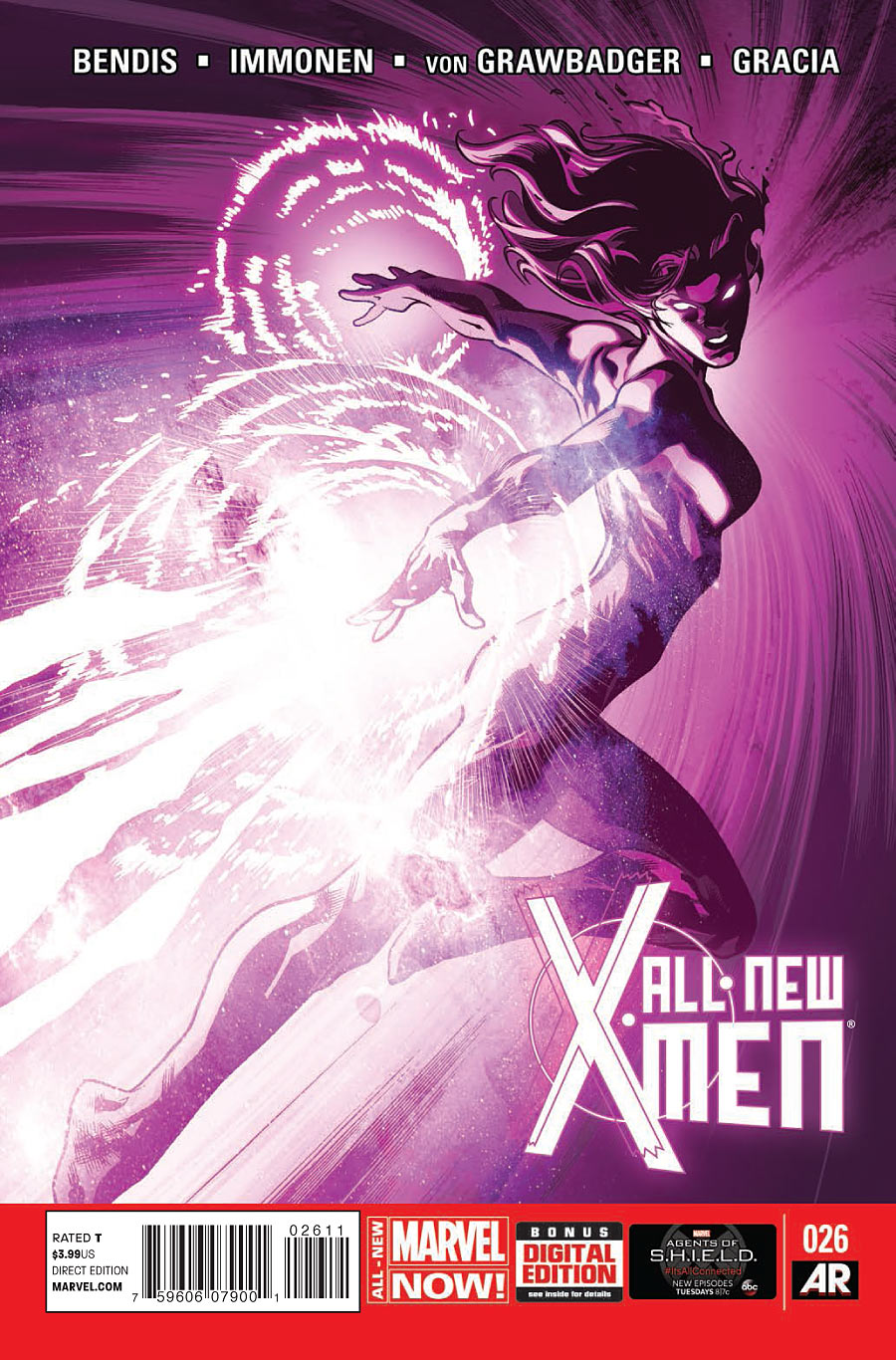 After young Cyclops heads into space for an adventure, the remaining Original X-Men return to earth after Jean Grey’s trail and get about six hours to relax before things go haywire in “All New X-Men” #26. 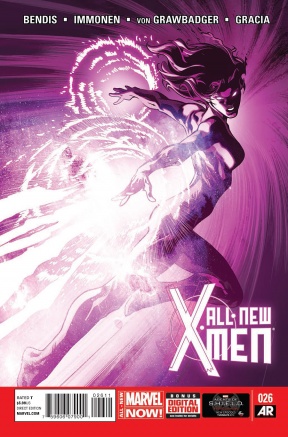 THE BROTHERHOOD OF THE FUTURE IS BACK! And it doesn’t mean good things for the X-Men of the past!

After a good old fashioned mutants-in-space adventure, the team returns to Earth and deal with the consequences. Most obviously, young Cyclops has taken leave of the team and joined the father-he-thought-was-dead-and-old-Cyclops-refused-to-tell-him-about for some interstellar bonding. This throws a wrench in the always complicated social lives of the teenaged mutants, and creating further angst for Jean Grey. She survived her trial, and discovered a new facet of her abilities, but at a great cost. She now has full knowledge of what her future-self did, and what kind of power she is capable of harnessing. The team needs time to recover, to process what has occurred to them, but this is the X-Men and they don’t get any days off.

The issue opens with Jean Grey having a nightmare of her actions as the Phoenix, and awaking in terror of what she could do. Her yells get the attention of older Cyclops, leading to a heart to heart that manages to stay tastefully creepy, and earning the disapproving ire of Kitty Pryde. Meanwhile, Angel spots a bitter X-23 leaving the school, the result of another relationship that bit the dust after young Cyclops goes off in space. Angel tries to get her to return to the team, but when she FIGHTS OFF A BEAR that’s in her way, Angel gets the message. Soon, however, another foe attempts to keep X-23 from leaving, this time with superpowers. Forces are gearing up to attack the school, and there might already be a villain hidden among them.

The increased publishing pace of “All New X-Men” actually allows for more time spent on character development, as readers know that another action-packed issue is just a couple weeks away. Brian Michael Bendis exploits this opportunity to open the issue with a solid ten pages of adult Cyclops and teenage Jean having a deep conversation. While the underlying romantic tension is present, Bendis wisely nips it in the bud, as adult Cyclops is 30ish and teenage Jean is, well, a teenager. Their conversation also serves as a nice bit of meta-commentary on the series itself, as Cyclops is very aware of the strangeness of his teenaged-self gallivanting through space with their father. Bendis can sometimes get a little too on the nose with his witty dialogue, but here it feels natural. After all, these characters have seen far stranger.

The second half of the issue nicely combines the fallout from ‘The Trial of Jean Grey’ story line with setting up the next arc. The idea of shapeshifter taking the form of an X-Men to infiltrate the school is not the most original X story, but as long as these characters stick around as possible franchise tentpoles, they’ll just keep on attacking. It’s helpful that this twist comes right after X-23 FIGHTS OFF A BEAR, which surely puts the reader in a more forgiving mood.

Stuart Immonen has brought the X-Men to space and back, and it appears that the interstellar journey has recharged his artistic batteries. This issue does return to the familiar meal barracks/winter forest setting of the series, but his attention to details and the vividness of the surroundings have never been better. The open third of the book is just two people talking in a dark room, but Immonen makes the potentially drab settings come alive. The small moment of Jean taking Cyclops’ hand, and Cyclops pulling away is so simple and framed so well that it becomes very powerful.

The dark opening is offset by the bright outdoor scenes as Angel catches up with X-23. While snow and mountains sounds simple, Immonen makes it look like a page right from National Geographic. He succeeds at the difficult task of making fake snow actually look cold. Immonen infuses X-23 with all the snarl and aggressiveness of her famous clone progenitor, and it looks totally plausible that a teenager could FIGHT OFF A BEAR. When the big twist occurs, Immonen places the surprise villain far off in the distance, a nice artistic touch that is a good change of pace from the typical in-your-face nature of comics.

Jean Grey’s trial is over, but that doesn’t mean that the X-Men will get any time to relax. Brian Michael Bendis does a nice job combining the fallout of the previous arc with the new plot, and addresses personal issues that would surely arise from Cyclops and Jean being around each other without getting creepy. Stuart Immonen makes the barracks and forest seem as vivid as any outer space battle, while adding many smaller character moments that greatly contribute to the tone of the story. The team is back on earth, but “All New X-Men” keeps things entertaining by throwing everyone right back into the fire.