Still reeling from a climatic battle with the future Brotherhood, Brian Michael Bendis and Stuart Immomen’s newest/oldest incarnation of the X-Men are finally treated to some downtime. But the ever-present shadow of Xavier’s legacy still looms large on the horizon. 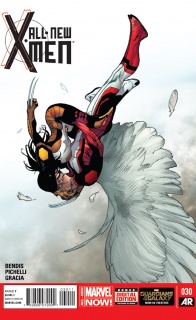 Past, present and future collide as the Future Brotherhood exacts their final judgment on the All-New X-Men. Plus, Angel takes control!

Bendis’ current run on “All-New X-Men” seems to have been a single, determined effort to cement the X-Men as the Marvel universe’s premier time travelers (or bunglers, depending on which side of the SHIELD conference table you’re sitting) and this summer his painstaking labours bore fruit in the form of ‘Battle of the Atom’. This most recent mutant-pocalypse played out across four separate X-titles and pitted past, present, and future incarnations of our favourite mutants against one another. ‘Battle of the Atom’ was an adrenaline-fueled, temporally unhinged romp through yet another time-line-that-could-have-been and, for the original X-Men, the horror of coming face to face another set of evil selves, coupled with young Cyclops’ decision to join his space-faring father in the cosmos, has left the remaining three old boys (and girl) more shaken than ever.

Issue #30 sees Bendis take his foot off the gas for a moment and offer up a rare and welcome chance for both Cyclops’ and Beast’s teams to catch their breath. It follows on pretty directly from the previous issue in terms of time-frame, opening with an insight into Angel and X-23’s night away from the chaos of the secret Xavier School. Bendis manages to capture some of the most important themes of this book in this short exchange. Warren and Laura’s conversation is purposefully awkward, a great representation of all the charming inexperience of youth, but when they’re moved to action, their physicality is as graceful and confident as you’d expect from the precision-trained soldiers that they have been trained to be.

Pichelli’s work brings this dualistic characterisation to life beautifully, switching between understated, televisual-style talking heads and kinetic, cinematic action panels with ease. Her previous work with Bendis on “Ultimate Spider-Man” means that she’s no stranger to bringing his teenaged protagonists to life with aplomb. Gracia’s colouring, crisp and exuberant as always, splits the two scenes with a mix of muted and vibrant tones that really highlight the differences between the twin personas of uncertain teenagers and highly skilled X-Men. This opening is lively and romantic, all the while still displaying the ever-present danger of being a mutant — but, most importantly, it’s fun, and that is really what helps this book stay light as it flits across the line between teenage angst and world-wide danger.

Over the past few issues Bendis has been laying the foundations to integrate the two separate factions of the house of X but, up until recently, the teams of “All-New” and “Uncanny” have been kept relatively separate, only getting to interact when the fate of the X-Men hangs in the balance. This issue gives us a chance to watch how they mesh in a less life-or-death situation, and the levity of the situation allows for the usual plot twists and turns to take a backseat in favour of more subtle character development.

Obviously, given the time-displaced nature of the book’s main characters, this series has a certain fascination with the past. This is a comic that is a slave to its history, but Bendis does well to pay homage without ever really belabouring the point. This run has allowed for a kind of soft-restart for this corner of the X-verse and, during the original X-Men’s time in our present (their future), we’ve seen allusions to a number of key events in their future (our past). This level of narrative weaving could have tangled Bendis’ storytelling in knots, but he refers to just the right pieces of personal baggage to remind us of the ever-present nature of the X-Men’s past.

This issue sees the focus put squarely on a young Jean Gray and Emma Frost, as their sordid history is dragged into the present, complete with some perfectly picked flashbacks to iconic moments in their lives. Pichelli has done her homework in order to unify the multiple time-streams with a choice selection of images that conjure memorable emotions for any long-time X-Men fan. Her nods to the past are balanced well in tone, reserved in comparison to her more ‘pop’ toned present-time illustrations.

The breathing room this issue provides also allows Bendis to explore how a character’s past can influence their present, whether consciously or subconsciously. He perfectly captures the willful arrogance of youth, contrasting it against the experience of adults who know that, for all their posing, they’re all still struggling to keep it together too. All of which means they have a lot more in common than they might imagine.

This similarity is reflected in Pichelli’s art, with beautifully rendered expressions that are often more telling than the words the characters are saying. She’s stepped into previous artist Stuart Immomen’s shoes and managed to match his crisp, modern illustrations without feeling like she’s simply echoing his style. While this issue may have served as a relatively reserved starting point for her, Pichelli’s ability to portray narrative-enhancing emotion through facial expressions and body language really adds a great level of concise, but confident character development to this mid-series one-shot. Her skill, along with her previous dynamic work with the Ultimate incarnation of Miles Morales, has me confident that she can more than hold her own  with the more physically demanding X-panels when the time comes.

Final Verdict: 8.5 – While this issue is light on action it never feels lost. The sister-title’s arc of ‘The Last Will and Testament of Charles Xavier’ means that there’s a clear sense of direction to the X-verse at large, and this issue shows that even the calm before the storm can be a chance to explore characters in a way that ties the past and present together, ready for an uncertain future.