After a much-hyped introduction, rumors of him taking over the Spider-Man title from Peter Parker, and then a disappearance for a few months, Alpha is back in this mini series. Keep reading for a spoiler-free discussion of the first issue. 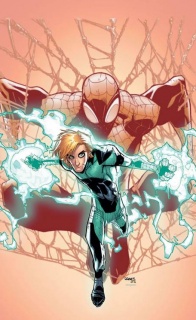 From the pages of AMAZING SPIDER-MAN, get ready for the greatest hero who ever existed…EVER!Alpha was having an awesome time of it, till that buzz-kill Spider-Man made him quit being a hero. But that was then …and this is NOW!Josh Fialkov & Nuno Plati (Amazing Spider-Man) reunite to tell the tale of a hero whos about to hit the BIG TIME!

In so much as there are “right” and “wrong” ways to do this, Alpha has been launched, as a character, the right way. After debuting in a marquee book (“Amazing Spider-Man”), the same creative team produces a miniseries, putting him in the spotlight, before, in the future, launching an ongoing, or putting him in a team book. This is an organic, consistent, and logical way to launch the character.

The character, also known as Andy Maguire, is very much in the same vein as Spider-Man, both in how his powers were acquired, and in how Maguire was, pre-powers. This is done on purpose; Alpha is meant to challenge Peter Parker, while also giving him the opportunity to see just how badly his life could have gone, had he not had the guidance of his aunt and uncle.

The mini series picks up a few months after his last appearance, where he was depowered for using his great power without great responsibility. This issue feels a lot like a #1, and that is both a good thing and a not so good thing. There are a lot of supporting characters established here – the kind-hearted principle, “Peter Parker” and his relationship to Maguire, the other misfits who sit with him at lunch. In fact, this feels more like the start of an ongoing than a mini, as Fialkov lays a ton of ground in relatively limited time, without touching characters like Maguire’s parents.

Fialkov manages to do something here that bodes very well for the mini – he’s made Maguire a sympathetic jerk, fluctuating between typical teen angst and potential for heroism. He isn’t the Damian Wayne of “Batman and Son,” who was so bratty people wanted him dead, nor is he the fully formed Tim Drake, who was almost as morally sound as Batman at 12. Maguire is a complex character with simple motivations, the same model that once made Peter Parker such a breath of fresh air in comics.

Plati’s art is certain to polarize people, as his style is very cartoony – that isn’t meant as an insult; his art truly looks like he’s trying to emulate a children’s television program (the guy’s longest run on a book was on the “Ultimate Spider-Man” television adaptation). At times, his art veers towards the silly, but overall, his tone matches what Fialkov is writing, and they present the story in a manner that echoes Maguire’s enthusiasm for his powers.

And it is precisely the enthusiasm that makes this book work. While, to be fair, the much-discussed location of Pittsburgh was never utilized, the book feels like its carving out a little corner of the 616 for Alpha to play in, which is precisely what the character needed. There are a lot of supporting Spidey characters; for this character to succeed, Marvel needed to take him out of the shadow of the Spider, and place him somewhere he could take root. They did that and, with any luck, this is the start of Alpha’s integration into the Marvel Universe as more than just a Spidey wannabe.