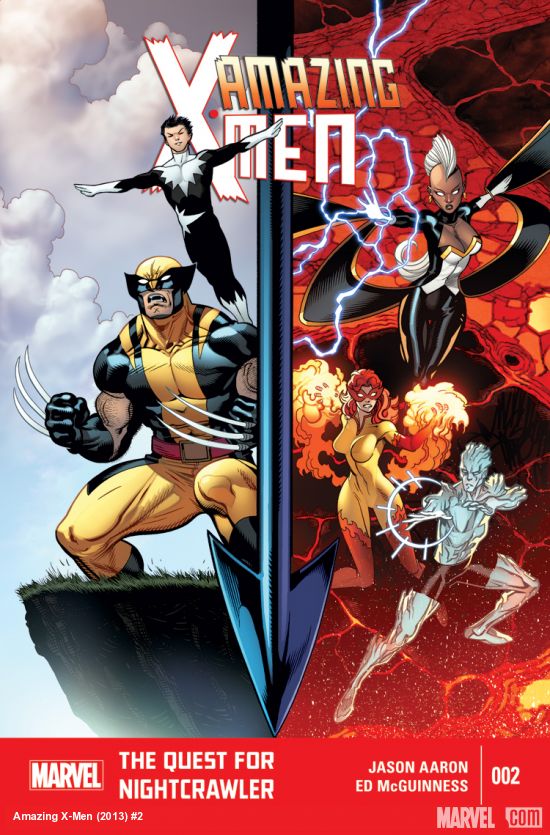 Wolverine and his teammates are split between Heaven and Hell and battle demonic forces as they search for Nightcrawler in a very entertaining installment of “Amazing X-Men”. 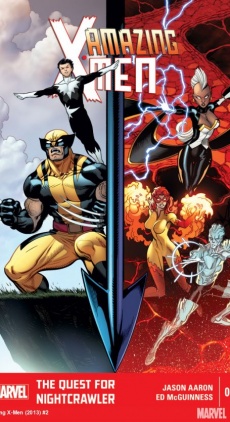 The X-Men, on the search for Nightcrawler, find themselves separated! Wolverine and Northstar are mysteriously in… heaven?! But where does that leave the rest of the team?

After an acclaimed run on “Wolverine and the X-Men”, Jason Aaron has successfully carved out his own corner of the X-verse. With the launch of “Amazing X-Men”, Aaron has the chance to take these characters away from the school and tell larger stories with the same sense of adventure and fun. The series begin as Wolverine and the members of his team discover a portal to a strange dimension, filled with strange enemies that seem to resemble Nightcrawler, their fallen teammate.

“Amazing X-Men” #2 starts with Wolverine’s team split between the two sides of the after life. Wolverine, Quicksilver, and Beast fighting against the forces of their old enemy Azazel, as he invades heaven on a pirate ship. Yep, a pirate ship. Meanwhile, Storm, Iceman, and Firestar has been sent to a much warmer place. They face the demonic armies of hell itself, with most of their powers nullified, and find a way out before Iceman turns into a puddle. Wolverine, still up in the clouds, receives some help from an unexpected source as Azazel tries to send him crashing down to earth.

Jason Aaron has made a name for himself by crafting fun, adventurous stories that create a new place for Wolverine in the X-verse, away from his typical brooding self. As the headmaster of the Jean Grey School, he has found himself to be not only a leader, but a teacher as well. “Amazing X-Men” is a great opportunity for Aaron to bring this new take of Wolverine back into the wider-world, and it doesn’t get any bigger than Heaven and Hell. The fact that Aaron fills every page with his trademark humor and sense of adventure makes the story highly enjoyable while downplaying the vast cosmological implications contained within. With a story this vast, Aaron is very wise to use his style to keep the book grounded, and avoids the possibility of pretension.

The action moves back and forth between Heaven and Hell, and thankfully both fronts are well balanced and equally entertaining. The amusement of seeing Wolverine in Heaven is counteracted by the distress of seeing Iceman trapped between a rock and hot place. Nightcrawler provides the narration throughout the book, which Aaron wisely keeps to a minimum. There isn’t much exposition to be found, instead Nightcrawler mainly speaks about approaching threats. Aaron makes sure there is enough to be intriguing, but not enough to be frustrating.

One of the benefits of the story’s wide-ranging and polarizing locations is that it provides Ed McGuinness with a great opportunity to flex his artistic muscles. It doesn’t get more different than Heaven and Hell, and McGuinness proves he is adept at handling both sides. His version of Heaven feels light and airy, while Hell is dark and fiery. He thankfully steers clear of the most gruesome visual aspects of eternal damnation. He is able to convey the despair of Hell without ruining the adventurous tone of the book. McGuinness’ overall style is less realistic and more cartoon-y, and fittingly compliments Nick Bradshaw’s recent work on “Wolverine and the X-Men”.

McGuinness handles the action scenes very well, and he is able to convey real kinetic energy on the page while avoiding any stereotypical Wolverine posing. Or stupidly pointy hair. There is a just bit of small face syndrome (a la Frank Quietly), but it doesn’t get distracting. For the most part, his character work is very successful at conveying emotions. Iceman’s pained expression as the heat of Hell literally makes him melt is particularly distressing. It will be interesting to see how McGuinness handles locations that are less broad in their form. Sometimes it seems more difficult to draw an office than another dimension.

Despite the fact that this is only the second issue, McGuinness’ style along with Aaron’s expert take on the characters have combined to give “Amazing X-Men” its very distinct tone. This is an issue where characters travel to the depths of Hell, with a river of blood and everything, but the story never feels dark or dreary. This is an adventure, with a pirate ship and sword fighting, and seems perfectly suited for a swashbuckling character like Nightcrawler. With the news that Jason Aaron will be stepping away from “Wolverine and the X-Men” due to a busy schedule, he has set up “Amazing X-Men” as the natural continuation of the same types of stories he excels at telling, and given the fact that this first arc travels to the afterlife, Aaron and McGuinness have given them a wide berth to tell the biggest adventure stories they can think of.

Final Verdict: 8.5 – Buy. Even after only two issues, Aaron and McGuinness have set up a very fun part of the X-verse for themselves.