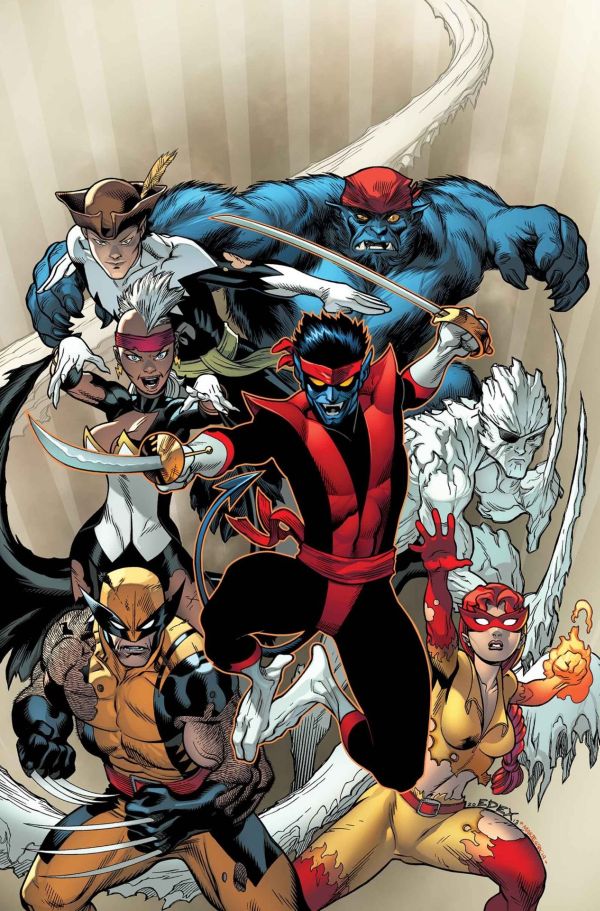 The battle between Nightcrawler and his father Azazel reaches its climax, and a happy ending might not be a happy at all in “Amazing X-Men” #5. 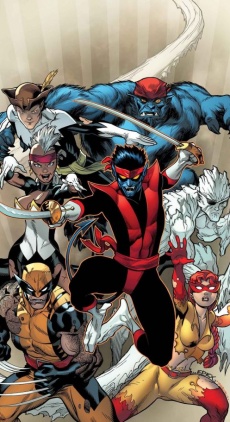 Nightcrawler and his pirate band of X-Men take on Azazel and his hellish hordes!One of the X-Men must make the ultimate sacrifice!

Millions of words have been written about the less than permanent nature of death in comics. With everyone from Superman, Captain America, Batman, and Jean coming back from the dead, and the resurrection of Peter Parker arriving in just a few weeks, killing off a character elicits little more than an eyeroll. When it was announced that Jason Aaron would craft a new X-Men comic and would bring everyone’s favorite blue teleporter back to life, it was easy to cynically dismiss it as just a publicity stunt to launch a new series. Five issues in, however, it seems as if the goal of “Amazing X-Men” was not to make death cheaper, but to make life more costly.

The final showdown between the X-Men and Azazel’s forces has arrived. As they fight across their pirate ships on the edge of heaven (that’s a fun sentence to type), the adorably deadly Bamfs try to destroy the portal and trap the mutants between heaven and hell for eternity. The reunited X-Men take on the hordes of warriors, while Nightcrawler faces off with his father one on one. Knowing that there is no prison that can hold Azazel and keep his friends safe, Nightcrawler prepares to make an enormous sacrifice, even as a departed mentor begs him to reconsider.

Wow, does Jason Aaron know how to write the X-Men. The way that the large cast of characters talk and act feels completely natural. While Aaron has had plenty of experience with the vast majority of these characters over on “Wolverine and The X-Men”, Nightcrawler is a completely new addition to the squad and he slides in perfectly. Not only is Nightcrawler a new character for Aaron, he is the narrator of this entire story arc, and the writer just nails it. He fills the character with his trademark angst and self-doubt, but reins it in just enough to keep things from getting incredibly sad and mopey. When it comes to Nightcrawler’s interior monologue, Aaron is very economical and resists the urge to fill the pages with melodrama, and instead it’s easy to read and doesn’t overpower the space of the page.

Spoilers in this paragraph. Nightcrawler needs to make a personal sacrifice in order to defeat Azazel, but this of course raises the question what a dead person could possibly have left to sacrifice. For Nightcrawler, the answer is his soul. In return, he gets exactly what he wants: the chance for one last adventure with his friends. Without his soul, however, the religious Nightcrawler knows he has forsaken his opportunity for peace in the afterlife. Aaron presents the choice as an obvious one for the character, he is nothing if not a gluten for self-punishment, and positions him as an incredibly noble person; a traditional hero, at a time when plenty of X-Men (looking at you, Cyclops) are moving into the grey area of moral ambiguity. The idea that for once the superhero’s sacrifice is to live and instead of to die turns a familiar trope on its head, and Aaron makes Nightcrawler’s resurrection surprisingly moving.

This issue of “Amazing X-Men” is essentially one huge action scene. Ed McGuinness makes it thrilling and entertaining from page one through the end. The book is filled with gorgeous splash pages and double page spreads, and it feels like each one must be the most impressive, until McGuinness rises to the challenge again a few pages later. The swashbuckling battle features swords and pirate hats aplenty, but it never looks corny or out of place. McGuinness draws the pint-sized Bamfs in a way that they look equal parts cute and horrifically viscous and very enjoyable to see perched on Nightcrawler’s shoulder.

The climatic showdown between Nightcrawler and Azazel is rendered like a classic battle between a hero and his nemesis. The lines are sleek and firm, keeping the action clear, and while making sure that the characters don’t look like posed statues. McGuinness hits all of the right balance between making everyone look incredibly muscular without straying into 90’s era gigantism. Colorist Marte Gracia contributes a lot to the issues, especially in the way the backgrounds appear almost painted. With so many costumed characters, the issue is just very bright to look at, and the level of color certainly keeps the tone very enjoyable.