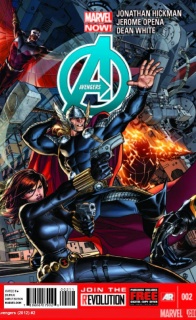 The greatest heroes in comics together on one unbeatable team! Now shipping twice a month, the Avengers “go large,” expanding their roster and their sphere of influence to a global and even interplanetary level. When Captain America puts out his call – who will answer? Big threats, big ideas, big idealism – these are the Avengers NOW!

After a one-page introduction last week, this is the first issue featuring the newly expanded Avengers in any real capacity. The group is an interesting one, and is made up of characters that tend to fall into one of two categories: classic Avengers or heroes on the periphery of the Marvel Universe. For every Spider-Man or Wolverine, you get a Hyperion or a Manifold. The cast’s dynamic is going to be something to watch going forward, because besides being Avengers now, many of these characters couldn’t be any different. Are Smasher and Falcon even aware of each other’s existence? This sort of goes back to the problem a lot of people had with Black Widow and Hawkeye being in The Avengers fighting alongside a god and a Hulk – if Captain Universe is around, do we really need Spider-Woman?

But it is up to writer Jonathan Hickman to make all these characters feel essential, and since 3/4 of the team has not thrown a punch or fired a blast in this series yet, it is hard to judge just how these characters will be used. What Hickman has done in this second issue is familiarize readers with some characters they may not be fully aware of, especially Manifold, Shang-Chi and the New Mutants alumni, Sunspot and Cannonball. Through brief introductions, the essence of these characters are illuminated, while more familiar characters are given fun little introductions as well.

The scenes of recruitment, in particular, set the tone for this book, which is, thus far, all about preparation. The Avengers are trying to be prepared for any possible problem that may arise by stacking their deck. Glimpses into the psyche of the various characters reinforce this idea, as so many of the recruits have motivations that would make them work harder and push through difficulties. The Mutants don’t want to be feared anymore. Manifold wants to prove himself a hero. Falcon doesn’t want to let his friend down. These motivations might make a character step through a portal to Mars more willingly than someone without skin in the game.

The big mystery players, still, are Hyperion, Captain Universe and Smasher. For casual Marvel readers, these names may not mean anything, and even for long-time readers, these may not be the versions of the characters that previously existed (especially the, apparently, female Captain Universe). However, issues #4-6 will be focusing on these three heroes, so those introductions may not be so long away.

Jerome Opena does a very nice job giving each recruit their own little world to exist in, whether it be the exquisite beach for Sunspot and Cannonball, the swank restaurant Tony and Steve take Jessica and Carol, or Logan’s dive bar. Opena does equally well with the Ex Nihilo and co creating worlds, as he does with Spider-Man hugging Iron Man. My only complaint is that, when not masked/in full costume, his Captain America, Cannonball, and even Captain Marvel all sort of blend together. Look here for instance:

It turns out, that is Captain Marvel, but there is very little that is feminine or particularly Danversian about her appearance here. With that one exception, though, Opena really shines throughout this issue. Particularly when handling Ex Nihilo’s narration about his people, Opena strikes a balance between drawing the story “realistically” versus how a creation story would be depicted. Hickman has said that he thinks Opena will do another arc on “Avengers,” and I truly hope that is the case.

Focusing on Ex Nihilo and co for a second, this is the facet of the book that feels the most Hickman-esque. These aren’t clear cut villains – they think they’re doing the right thing, and are, in their own way, trying to save Earth. And because of that, their threat feels the most relevant for the Avengers, whose entire mission is to save the Earth. While many readers might have preferred a more classic Avengers villain to start off the run, this feels like Hickman, and is letting him establish himself on this book early on.

The biggest problem this book has is that we’re now two issues in, and not much has happened. As much fun as the recruitment scenes were, or important to the tone of the series as the scenes of Cap and Tony talking game plan were, we’ve seen precious little Avenging in this story. Sure, there will be time for all of that, and while Hickman has done a nice job moving the story along while giving flashes to how the team came together, this all feels like preamble. Hypothetically, January’s “Avengers” #3 would be where a Silver Age Avengers series would have started – with the battle. And the Avengers, if nothing else, are assembled to fight huge threats – some of that has to be at the core of what this book is: giant action.

We live in the age of decompression, so this is to be somewhat expected, and this is nowhere near as egregious as “Fantastic Four” #2 was in this regard, but it is still a concern going forward. Since the book is, apparently, going to be arranged in 3 issue arcs, hopefully future arcs won’t face this problem, of having two issues of lead in for one issue of big action. And because of the book double shopping, deconstruction is an even bigger issue at hand. The solicitation makes light of the fact that the book is double shipping because the team is expanding, but that appears to be not true in the slightest. Marvel wants their most popular books coming out more frequently, and so the cast, most likely, was expanded to fit that mandate, instead of the other way around.

But Hickman has taken that in stride, and given some very compelling in story reasons for a bigger team, and deftly manages to tie in, somewhat, the core team from the film as the core team here. We also get a glimpse at Tony’s big board of names, and some easy to spot names such as Brian Braddock (Captain Britain), Bonita Juarez (Firebird), Marc Spector (Moon Knight) and Jennifer Walters (She-Hulk) are listed as potential future members of the team, and fit into what Hickman has said in various interviews, which is that the team will expand and change over time. This, in terms of scope, feels almost too big. This, unfortunately, continues the trend of Marvel making all non-Mutants Avengers, and no longer having unaffiliated heroes. But that is not Hickman’s problem; he has to create a functional team and an exciting book with the characters at his disposal. And for the most part, he does that quite well.

Final Verdict: 7.0 – Buy, but don’t be surprised if there isn’t as much action as you’d like