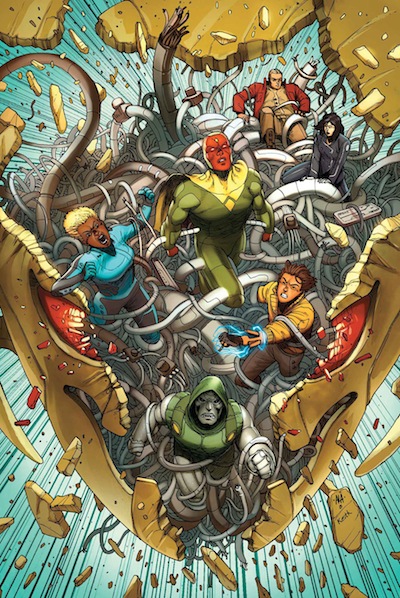 Ultron has been defeated, Alternate Future Wolverine and Sue Storm have been swept under the rug, and Hank Pym now leads a new team of artifical Avengers into the “Age of AI!” Will this event-aftermath book manage better than the crossover it spinned off from? Read below to find out! 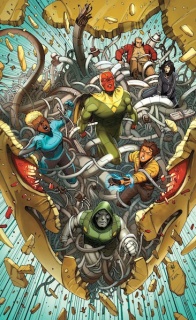 HARDER. BETTER. FASTER. STRANGER.
• The triumph of Hank Pym turns to tragedy for the human race…an unfathomable Pandora’s Box of destruction!
• When a brave new world is unleashed, only one team of Earth’s Mightiest Heroes can save us from the future – AVENGERS A.I.!
• THE VISION! HANK PYM! VICTOR MANCHA! DOOMBOT! The mysterious ALEXIS! MONICA CHANG, AGENT OF S.H.I.E.L.D.!
• The AGE OF ULTRON is over! The AGE OF A.I. is NOW!

Last week’s “Age of Ultron AI” one-shot, written by Mark Waid and handled by regular “Avengers AI” artist Andre Araujo, set up an incredibly exciting direction for Marvel’s most put-upon hero, Hank Pym. Now, as the writing reigns are handed from Waid to Sam Humphries, the excitement dies down as “Avengers AI” turns out to be, not necessarily the rallying cry for a new era of Hank Pym, but still a pretty good comic.

After “Age of Ultron AI” set up the new direction for Pym, “Avengers AI” doesn’t really demonstrate why there needs to be a fifteenth Avengers book. The story itself is set up rather suddenly and is definitely  a “ripped from the headlines” type of premise. It comes directly from Age of Ultron too and is a clever way to set up characters dealing with the fallout of that title. The roster, at least for this issue, of  Hank Pym, The Vision, Victor Mancha, and a rogue Doombot sort of makes sense and it’s established why they are the ones who need to stop this threat so it’s not just a new team for the sake of a new team, but it still feels like the threat could be solved with a regular Avengers team and maybe Hank Pym on IT support. So unfortunately, the plot itself doesn’t do a lot to demonstrate why there needs to be another Avengers title, but the characters do.

Hank Pym keeps on with his new 2011-Matt-Murdock style reinvention and it’s great seeing the character evolve from the pit he’s been in, or at least been perceived as being in, for a long time. The rouge Doombot that Hank has reprogrammed is another highlight of the book, as any excuse to put Doctor Doom in a fourth Marvel Now! title is a perfect one. Monica Chang, solicited as a member of the team but who is only a SHIELD director here, is intriguing even though she doesn’t get much of a spotlight and it’ll be interesting to see what comes from SHIELD’s Aritifical Intelligence division. Alexis, as stated in the solicitation, is mysterious and therefore no opinion can be derived of her. Victor Mancha probably suffers the most out of all these characters. Maybe I just haven’t read the original “Runaways” run in a while, but I don’t remember him being the type of character who would ever unironically say “swag.” He’s still a fun character and he seems pretty true to his core characterization, but there’s some Stilted Teen Dialogue that becomes a little distracting. The best character here though is, surprisingly, The Vision. Here, it’s explained why he’s been out of the spotlight for a while and what that reason is and what it sets up is pretty exciting. Plus, his brotherly interactions with Victor feel natural and a series that puts these two together is a natural choice.

Andre Araujo’s art is just as solid as his work on last week’s one-shot. Even though there are some noticeable wonky details like Victor apparently hanging out at the most indistinguishable arcade (it might be a daytime version of the arcade nightclub from the Generation X movie) There is, however, a lot of nice work put into other characters like The Vision who, seriously, has the best two pages of the comic. Araujo’s faces are also do a good job of conveying the character’s and there’s really only one instance of someone looking like they’re losing their mind for no reason (the panel where Hank says “See?! What could be better?!”) Plus there’s a lot of fun details hidden throughout, like the one person wearing an “Akira” jacket Araujo assumedly threw in.

Overall, “Avengers AI” is a little bit of a disappointment compared to the Age of Ultron tie-in from last week. It is, however, a fairly solid comic book that sets up some interesting directions for some characters you may not have otherwise cared about. Plus, they have a Doom on their team. Doctor Doom automatically wins respect points for any book.

Final Verdict: 7.2 – Buy if you like The Vision, Pym, or Victor Mancha, browse otherwise.