The infamous series that sent shock waves through Twitter & Tumblr upon its announcement. So much ado was made about the loss of “Avengers Academy” for this book, the fact that it borrows its premise from Battle Royale, and is clearly meant to strike while The Hunger Games is hot.

Enough of the B.S.

Is it a good comic book or not? 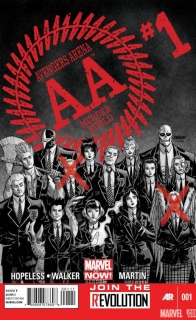 Trapped on an isolated island, 16 superhuman young adults (including cult faves like members of the Runaways, The Avengers Academy and Darkhawk) are given a chilling ultimatum by their demented captor: Fight or die…only one will walk out alive! Thus begins a primal battle that will test the skills, stamina and morals of each combatant. Welcome to Murder World, where the secrets are plenty, alliances are fleeting, and the key to victory might be rewriting the rules of the game. Who will survive? The rising star team of Dennis Hopeless (X-MEN: SEASON ONE) and Kev Walker (THUNDERBOLTS) dare you to tune in to your new favorite comic NOW!

The first issue of “Avengers Arena” is as straight-forward as it could possibly be. It exists purely to deliver the premise of a youthful superhero deathmatch, which is obviously the draw for its target audience, with some bare semblance of a plot. I’ll tell you right off that bat that this is as threadbare a plot as they could have come up with for this story. The issue begins with a flash forward sequence that pits Hazmat (from “Avengers Academy”) against X-23. Hazmat gives us a narration about being a typical teenager – angst and disillusionment and all that. And right away we have a problem: This is not a bad comic book, but from beginning to end there is not one single surprising or daring choice made with any of the conflict or characterization. From here we’re taken back to when all the heroes are abducted by Arcade.

This is where the biggest problem with the storytelling rears its head, by far. Arcade stands there and taunts the kids for pages and pages pages. Nothing about the premise for his murderous game or newfound godlike power is ever explained or justified. I don’t mean that there’s missing exposition. Too much exposition is the death of entertainment. I just mean that there is no motivation for the entire concept of the story other than “Arcade is an insane super villain of Adam West Batman proportions.” Arcade suddenly has the ability to transport all of these youths to his Murder World. He can suddenly take full control of their movement to hold them captive there. With a quick slap he can send someone soaring miles away. He’s certainly presented as an all-powerful threat to our heroes – we’re just not sure how or why. Why is he choosing to make young super beings fight one another for his enjoyment instead of using his power to dispose of greater threats, achieve greater rewards, or take revenge for past humiliations? If it’s simply because he’s maniacal and overly-elaborate, then okay, but he’s not written as a very cunning, sinister, or charming villain. He’s just a generic boastful villain at this point. It’s all very matter of fact: Arcade has incredible new powers and you have to fight each other or he’ll use them on you.

Dennis Hopeless (who wrote the terrific “X-Men: Season One” graphic novel for Marvel) claims that there will be lots of emotion and strong character work to make the deaths matter and the conflicts interesting. Unfortunately, none of that is present yet, because the book assumes you know who these characters are before it begins. We spend a couple extra pages with certain characters in an attempt by the writer to make us care more about them, but it feels more like a means to an end than an attempt for us to get to know who these kids are. The writer needs to focus on certain characters up front, so the last part of the story hits harder. If you have “Avengers Academy” baggage, then you’re obviously going to feel more strongly, but without that baggage, it’s just a writing trope to make the issue “about” these couple characters in particular. Tragedy is earned by a bond created between characters or the book and reader over a period of time. Hopeless may have better luck in future issues, but in this one, he seems to favor violence, shock value, and senseless death.

Kev Walker’s art is the saving grace of the issue. When everything else fails to be very novel or interesting, at least his pencils are brilliant to look at. If there is any real emotion to be culled out of the story, it’s on the characters’ faces and in the brutal violence that is visually jarring. Kev Walker’s depiction of violence is truly expert when you remove it from the feeling that it’s being utilized for shock value. The facial acting of his characters punches up what is a pretty by the numbers script. His best work is in the Hazmat vs. X-23 battle, mostly because it doesn’t consist of a character standing around yelling at and taunting all the other characters. X-23 leaps from the page as Walker highlights her feral nature. The two of them deal all manner of brutal blows to one another that feel authentic and painful. This is such a nice showcase for Walker’s abilities that it’s simply a shame that the script couldn’t have picked up the pace and given him more interesting things to draw.

If you’re going to write a book that is very clearly asking the audience to just accept a wild premise without explaining it, then just dive right in. Issue #1 isn’t a book that seems to want its readers to come back for more, because it takes too long to get to the point, without saying much of anything. Dennis Hopeless is a talented writer and is ready for the big leagues, but this issue doesn’t really show it. Instead, “Avengers Arena” #1 feels like exactly what it should have been actively avoiding: an excuse to latch on to a trendy premise and an excuse to kill off excess characters.

Final Verdict: 4.2 – Pass. You have to think it’ll get better, but there isn’t enough here to take another chance on.