Following the bloody ride that was “Avengers Arena”, Dennis Hopeless and Kev Walker reunite to deliver a follow-up with “Avengers Undercover.” Check out our thoughts in this kind of spoiler-free review that will have mild spoilers for “Avengers Arena.” 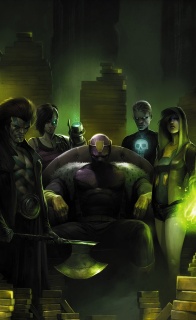 This March, ask yourself the question: If you were a teen superhuman and all the adult heroes failed you when you were kidnapped and tortured, would you switch sides and break bad? Marvel is pleased to present your first look at AVENGERS UNDERCOVER #1 from Harvey Award winning writer Dennis Hopeless and critically acclaimed artist Kev Walker!

Damaged, broken, and forever changed by their experiences in Murder World, five conflicted young superhumans are out to prove to the world they can still be heroes. Now, Bloodstone, Hazmat, Deathlocket, Cammi, Anachronism, Chase, and Nico are going rogue and heading deep undercover with the Masters of Evil. And they’re going to take them down from the inside!

But the longer these teens spend undercover, the deeper they descend into darkness. And the line between good and evil blurs. Before it’s all over – a new super villain will be born!

“Avengers Arena” totally sucker punched us last year when, instead of being the shameless tie-in to the Hunger Games/Battle Royale craze a ton of people assumed it to be, Hopeless and Walker actually gave us a brutal new corner of the Marvel Universe, filled with characters redeemed from obscurity (it’s been over a year and I’m still happy that Cammi made it past Annihilation) and some dynamic new faces to populate the young hero scene. Add to that some brutal fight scenes and a reinvention of Arcade that actually made the whole Battle Royale rip-off seem natural, and “Avengers Arena” easily became one of Multiversity’s favorite Marvel titles. Of course, it was also a series that existed in a vacuum and an at-times break-neck pace. Now, with “Avengers Undercover”, Walker and Hopeless get the chance to slow down, breathe, and allow their characters to spread out into the rest of the Marvel Universe.

Following the blowback from the finale of “Avengers Arena”, “Undercover” deals with the surviving contestants who aren’t busy hooking up with Teen!Cyclops (Hazmat, Chase, Nico, Death Locket, Cammi, Anachronism, and Bloodstone) being thrust into the public limelight after Arcade uploads footage from the Avengers Arena to YouTube. Instead of a quiet welcome, everyone has to deal with the unwanted popularity which leads into some pretty interesting comments on the nature of being a fan. Yeah you can say you love Anachronism but is that because he’s a nice person or because he was a total badass when he beheaded Kid Briton? Questions like those, on the nature of violence and its effect on young heroes, are prevalent in “Undercover” and leave us with heroes who haven’t just been changed since they entered Murderworld. They’ve been changed since they left it.  Without going into any spoilers, this isn’t just a second volume in some ongoing “Teen Avengers” mega-series (“Young Avengers” was taken, natch.) It’s a follow-up to “Avengers Arena” that raises the stakes considerably and truly offers a great entry point for those unfamiliar with the prior series. That might be helpful if you weren’t too comfortable with the fast-pace “anyone can die” nature of “Arena.” While it’s true that anyone could die here too, the danger isn’t as blunt as it was on Murder Island. “Undercover” is a more in-depth examination of the characters and their world and is relatively quieter. Not totally quiet, of course explosions happen and this book wouldn’t be Hopeless without someone getting hurt, but the tone is similar to, say, the first half of Catching Fire if we’re going to continue the Suzanne Collins parallels.

“Undercover” isn’t just a display for Hopeless to show off his affinity for writing excellent young characters, but it’s a demonstration of just how versatile an illustrator Kev Walker is. Sure, “Arena” had its quiet moments but with the constant high level of tension it was always easy to sort of forget those scenes. Now, with the spotlight dimmed, Walker’s talent in clearly conveying the emotions of his characters is all the more apparent. Not only can he tell us everything about a character with just the way she sits at a counter, but we can feel the way the world feels in relation to the characters. Everything’s great, it’s peaceful; no one’s being chased by a madman in Elton John cosplay. It reminds me of the way, if you have depression or anything similar, everyone who’s acting so happy and bright just seems so goddamn annoying. Not only have the horrors everyone has gone through been reduced by their appearance on YouTube, they’ve been glorified and absorbed into another consumerist culture. And when one character in particular loses it, in probably the scariest page I’ve seen all week, you can’t help but to understand why.

At the time of its reveal, a ton of people accused of “Avengers Arena” of being a lazy cash-in on The Hunger Games. While I’m still pretty sure the cash-in part is true (though I really have no opinions on that matter one way or the other) Hopeless and Walker have been anything but lazy. “Undercover” proves that without a gimmick leading them like Murder World. “Avengers Undercover” proves itself as a worthy, likely superior, successor to “Arena” and, even though I think there’s one character in particular whose actions here are too much of a reach, it’s an excellent example of Marvel’s stable of skillfully-crafted young characters.