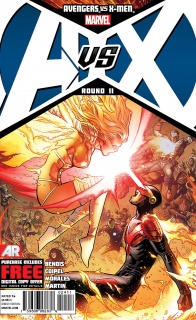 The biggest comics event of the summer hits it’s red hot penultimate chapter as Marvel is pleased to present your first look at Avengers VS. X-Men #11! From the creative tour de force of Brian Michael Bendis & Olivier Coipel, the Avengers gather together to take on the remaining hosts of the Phoenix Force with the aid of Charles Xavier! Can the combined might of Earth’s Mightiest, Professor Xavier, the Scarlet Witch, Hope and more put an end to their reign once and for all?

So yeah. That comic happened.

The weird thing about Avengers vs. X-Men is, when you look at snippets through the series there are some real great moments in the event comic. The sixth issue was undeniably rad. Olivier Coipel, the artist for this issue, has been crushing his segments, just like he did here. We’ll get to him again in a minute. Adam Kubert has produced pretty well overall. Some of the ideas throughout have been between “good” and “holy crap, that is extremely cool.” Basically, it’s been a hodge podge of good and bad, with a lot of mediocre in-between.

That’s basically this issue in a nutshell.

On one hand, you have Olivier Coipel once again doing his thing. He creates some really spectacular moments out of fairly ordinary things, like Rogue asking the Avengers for asylum for the X-Men. That moment had a significant amount of weight added to it just by Coipel doing Coipel-y things, and this issue is all the stronger for it. 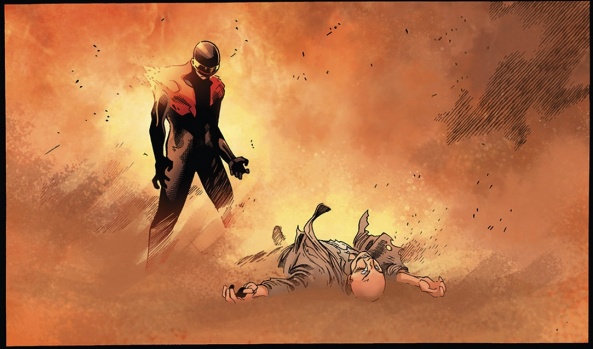 Then you have the bigger moments which mostly prove to be hugely effective. For example, the now infamous take down of Xavier was a sight to behold if only because of the (literal) energy and power Coipel brought to it (see: above).

However, there were some moments, like the final fight between Scott and Emma, that don’t make a lot of sense from a choreography standpoint. That scene in itself was extremely hard to follow, which is a bit of a shame given that it was one of the major turning points of the issue. Besides that hiccup though, Coipel was a huge positive for this book, as he always is.

Now, to the bigger negatives of the book. I want to say up front I really like Brian Michael Bendis. The guy is a great writer and has written a ton of books that I really, really like. In fact, right now I am really digging Spider-Men, a book many don’t believe needs to exist but I think it does strictly because a) it is really entertaining and b) because Sara Pichelli rules. The guy can do a lot with a pretty thin concept, and his character work is frankly unparalleled on the right project.

His problem is, according to my theory at least, is that he is far more skilled at working on books that allow him space in his own sandbox. Sure, that’s probably every writer, but when you look at his biggest successes on Big Two books, you see a correlation forming between them. Ultimate Spidey? Own sandbox. New Avengers for a long time? Own sandbox-ish. Even something like House of M – a major event – was Bendis creating a world that was, quite frankly, totally awesome.

But then you have something like this or Siege where it just feels like his writing never really gains any traction. For example, the initial scene where Cap recruits The Hulk. The whole sequence reads false to me: it’s like this set-up for a monumental scene that ultimately falls flat, and seems strictly aimed at potential new fans from The Avengers.

There are a number of scenes that just don’t work, and when paired with tie-ins like Kieron Gillen’s excellent interactions between Emma and Scott in Uncanny X-Men, it makes the book stand up even less well. Scenes that should have substantial weight to them – like Xavier’s aforementioned death – come across as lacking because the script feels like it is all substance and no style. In fact, it feels like a blockbuster action movie, where you’re supposed to care about something but you can’t really because the creatives behind it just didn’t get you there.

Which is a shame because conceptually, this is all very attractive. I’m not jaded enough to say I couldn’t care about a major character dying, or even something like Rogue eating crow and looking for asylum with the Avengers. Those are naturalistic story beats that, when handled well, could be powerful and hugely emotional. But the way they are presented falls flat, and even are confusing to a certain degree. Worst case scenario, they are handled like the reveal of Cyclops as…*gasp*…DARK PHOENIX, in that what comes across is telegraphed well beforehand and what actually happens is terribly heavy handed.

Yet next issue brings Jason Aaron back to the mix, as well as frequent collaborator Adam Kubert. If anyone can bring this thing home, it’s Aaron. In my perspective, he’s on the shortlist of finest writers in comics, and given where this all leads, he’s going to need his A game. As for this issue, it came nowhere near the creative team’s A game, which is a shame for what amounts to the flagship of Marvel…well, now.

Note: The Bendis/sandbox theory is one of the reasons why I think he’s a great fit for the Guardians of the Galaxy book that is assuredly coming from him. That ongoing rumor BETTER be true.