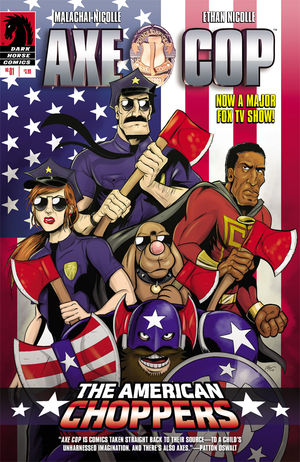 AXES! COPS! CRIMINALS DRESSED AS FRUITS! AXE COP HAS ALL YOU COULD EVER ASK FOR! Read more in our review below! 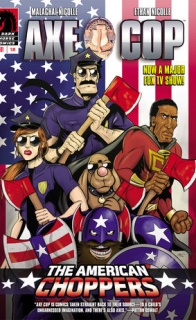 President of the World Axe Cop reunites with Super Axe, an old friend from college, and the two of them decide to start a superteam of axe-wielding heroes to defend America, called the American Choppers. They are joined by Captain Axe, Axe Girl, Axe Woman, Axe Dog, and other axe-wielding heroes. The only problem is that there are no bad guys left, but that all changes when mysterious giant creatures attack the city!

* Upon its debut as a webcomic in December of 2009, Axe Cop was instantly hailed by the entertainment press as a hit!

“So engaging that you can’t help but read this book all in one sitting.” —IGN

“Axe Cop” has been one of the wildest break-out hits of the past five years. Written by 4 (now 9) year-old Malachai Nicolle and illustrated by his older brother Ethan, “Axe Cop” is a display of childishly pure imagination. The series revolves around the titular Axe Cop and his efforts to KILL ALL CRIME with his best friend/secret brother Flute Cop, his pet T-Rex, and someone named Dr. Sockarang. Together they fight evil forces like Dr. Poo and Fox’s producers (RIP Axe Cop starring Nick Offerman, Megan Mullally and Patton Oswalt,). For the past five years, the Nicolle siblings have been producing this series (that started out as a webcomic) with Dark Horse, and with “Axe Cop: American Choppers” they’ve shown that they can grow up without losing any of that rich childlike wonder.

Due to the whole “being written by a 4 year old” thing, “Axe Cop” has had a penchant for having insane concepts ricochet around the pages and lead the characters to some insanely delightful places. Before I say anything further, I just want to make it clear that I absolutely love that about “Axe Cop”. Since Malachai is a young kid, the randomness in “Axe Cop” never felt forced; it’s all the sincere expression of someone who is probably the raddest kid in the world. Even though the stories are simplistic as heck, it’s always entertaining to watch all the insane threads come together at the end. Hell, it’s even funnier to watch loose threads get dropped or suddenly killed off. However, with “American Choppers”, Malachai seems to show signs of maturing as a storyteller. I mean, yeah, he’s still 9, but the plot’s a lot more focused than previous “Axe Cop” stories. Axe Cop and some of his buddies have decided to team up and save the world, only to find some unfortunate consequences when they hold public try-outs (just like last time Axe Cop did that).

Thankfully, Ethan’s skills as an artist keep these scripts from looking like The Zodiac Killer’s notebook. The characters’ super-serious poses contrast with the ridiculous dialogue while still maintaining a cartoonish tone that creates a consistent world for Axe Cop and his pals. Really, even though Malachai’s wonderful ideas are the kindling for this series, Ethan’s framings sell every joke. There’s one particularly genius instance where Axe Cop’s on the phone talking to the other American Choppers and the final zoom-out on his location is nothing short of hilarious. Even though “Axe Cop” gets a lot of notice for being “that comic written by a 9 year old”, it’s really a collaboration between two talented artists who know exactly what they want from their comic.

Honestly, the biggest problem with the newest “Axe Cop” is that it might be more of the same. And by the same, I mean the goddamn incredible. Don’t get me wrong, “Axe Cop” is obviously one of the top five accomplishments humanity will ever achieve (better luck next time, Mars colonization) but having it in a constant stream like this may be a little overwhelming. It’s said that too much comedy ingested at one point can be tiresome, and that’s certainly the case here: the insane out of nowhere twists, the bad guys dropping left and right, the utilization of dinosaurs as vehicular transport just might be too much. In short bursts like the online archive or collections it’s a manageable load, but trying to keep track of Axe Cop’s adventures on a monthly basis, especially the demonic quest they’re about to undertake with this series, might genuinely cause someone’s face to melt.

And similar accusations are thrown at a lot of convoluted comics like that every month, but that’s not what I’m trying to get at. I’m not even trying to be funny when I say “Axe Cop’s” only flaw is that it is too hardcore to live. The sheer overload of content and concepts being thrown at the reader on a steady basis, in addition to the equally madcap and intense art, is enough to reduce certain readers to meek piles of blubber. That’s right: “Axe Cop: American Choppers” #1 suffers the same problem that a lot of serial storytelling has but suffers by being too incredible for me to handle.

Oh, hell. Forget everything even remotely negative I said in this review. Go buy “Axe Cop: American Choppers” #1 now so we can pay for Malachai’s Harvard tuition and make him president.

Final Verdict: 8.9 – If you love “Axe Cop” already then go ahead and buy it. If you aren’t familiar then you may want to dip your toe in the water with the online archive or the other books before “American Choppers” smacks you in the face. If you don’t like “Axe Cop” then nice try but there’s no way you can trick me into believing you exist.