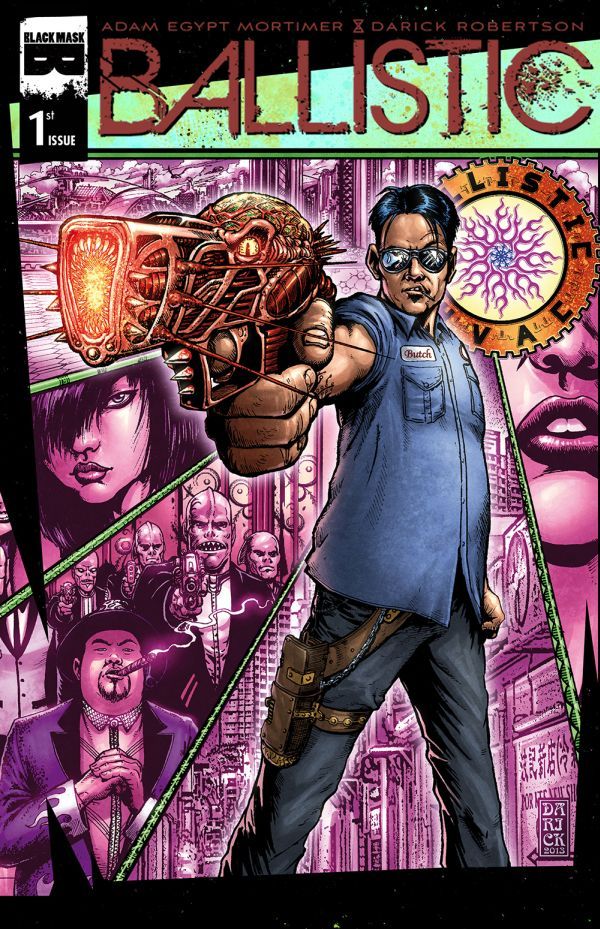 The first chapter of this five-issue miniseries from Black Mask is all kinds of weird and wonderful. What else can be said of a brightly coloured and deeply criminal future where pretty much everything is alive? 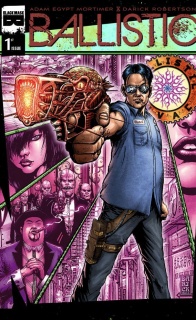 This madcap sci-fi buddy adventure about a wanna-be bank robber and his best-friend Gun, a drug-addicted, foul-mouthed, living gun, marks Darick Robertson’s return to the hard sci-fi worldbuilding of his classic Transmetropolitan mixed with The Boys’ ultra-violence and the lunacy of Happy.

There’s one problem with books that are narrated with first person captions, and it’s that it can be hard to determine why this person is telling us their life story, and in what context they’re telling it. Are they being interviewed? Writing a big, explain-it-all letter toward the end of their lives? What else could justify the terse, enigmatic, noirish tone that so often gives us our first window into the main character’s life?

A couple pages in, “Ballistic” subverts this trope in a big way, and it’s your first hint that this is going to be a very unusual sort of comic book. You know, your first hint besides the surreal cityscape and the Cadillac with wings.

Put simply (is there any way to put it simply?), there’s more to Butch the air conditioner repairman than meets the eye. He’s got one heck of a criminal skill set, not to mention a talking gun who’s liable to make sardonic remarks, and together they’ve got a madcap world to negotiate. Nearly every kind of technology they encounter is biologically modded somehow, from cars to air conditioners to designer drugs, and you get the feeling that the criminal underworld has taken full advantage of all these developments as they set about robbing a bank.

As interesting as it all is, though, subtlety is not this title’s forte, and if you worry that this issue is all about cramming as many details about this sci-fi world into one issue, it kind of is. There’s even a set of annotations at the end, fleshing out the details you’ve already seen and adding further background information. In the end, there’s not too much space spent on moving the plot forward, but we do have a nice handle on the characters’ personalities – no mean feat, that. It’s all about the little expository elements that Mortimer tucks into incidental moments, giving us a bit of a feel for the buddy dynamic between Butch and Gun.

The only real failing here is that sometimes it feels as though too much effort is spent trying to disconcert us with how weird this world is. Don’t get us wrong: it really is weird and disconcerting, but that same note is hit a few too many times and it disrupts the flow of an otherwise very well-paced issue.

Darick Robertson’s art really rises to the challenge of fitting so much world-building into one installment. Between the sprawling cityscapes, fleshy gadgets, hallucinogens and honeycomb-like banks, it all gets to be overwhelming in a surprisingly pleasant way, with the wealth of extra flourishes putting you in mind of James Stokoe’s more bonkers moments in “Orc Stain”. At the same time the storytelling is clear and straightforward and economical, managing to work in some nice facial expressions that gesture toward deeper character development – even, and especially, in the case of that (kind of depressive) talking gun. Diego Rodriguez’s colours, meanwhile, are appropriately vibrant, pushing the exotic factor and offsetting the noir tone of Robertson’s style. It all adds up to a great-looking comic with all kinds of wonderful little bits and pieces that take a few rereadings to pick up on.

Overall, “Ballistic” is a refreshing trip to an altogether unusual world, and if the second issue manages to take the plot somewhere even more interesting, we may have a winner on our hands. For the moment, though, there’s plenty of madness and great art to enjoy. Plus that talking gun is looking to be one of this year’s most interesting sidekicks.