Lord Baltimore returns, this time in the company of allies… 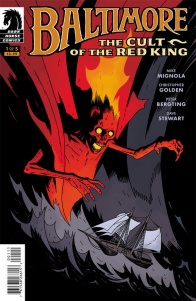 The Red King is legendary. But is he the stuff of myth—or the ultimate adversary of the human race? In this series, Lord Baltimore discovers the truth about an ancient evil that threatens to destroy the world.

The last two “Baltimore” miniseries changed the book. It used to be one man on a journey for revenge, but those two stories recruited a team of characters around him. This is no longer just the story of Lord Baltimore. This is the story of Lord Baltimore, Thomas Childress Jr., Captain Demetrius Aischros, Dr. Lemuel Rose, Simon Hodge, Harish, Mr. Kidd, Sofia Valk, and Judge Joaquim Rigo. “Baltimore” is a team book now! So, right away this story feels very different, but in a good way. This is uncharted territory.

I love this turn Christopher Golden and Mike Mignola have taken “Baltimore” on. The book was always good, but it’s been getting better as it progresses. For a while, there was a certain lack of tension. Lord Baltimore couldn’t die, because the comic had to eventually reconnect with the end of the original prose novel, and he couldn’t change very much, because he still had to be the same character that was written in the novel’s finale. So much of the tension came from the supporting cast… which was mostly limited to characters unique to the current miniseries because Baltimore traveled alone.

Now many this that were once certain are uncertain. There’s a huge cast of characters that carry over from book to book, and damn it, they’ve gotten me to invest in each and every one of them. (OK, not Mr. Kidd, but it’s early days. I’m still getting to know him.) I am already concerned someone is going to die by the end of this arc. (Please don’t let it be Sofia… or Simon… or Dr. Rose.) And Lord Baltimore himself has fundamentally changed. He’s no longer a man driven by revenge, resentful of his humanity. Now he hunts a much more formidable enemy, not for himself, but for others. Now he laments his lost humanity.

This works to Peter Bergting’s advantage. He’s not beholden to what’s come before in terms of tone. This story is so different, it’s allowed to be a departure. In fact, it’s at its best when it’s different. If you weren’t convinced Peter Bergting was right for “Baltimore,” you will be by the end of this issue. The sheer scale of this story is beyond anything that’s preceded it, and Bergting absolutely delivers. Stenbeck-era Baltimore always had this gray, unpleasantness to it. It was a melancholy world. Bergting’s world is still that, but now it’s a little warmer. The camaraderie of the team introduces different tonal elements.

This story also has a bigger focus than ever before on the otherworldly. “Baltimore” was primarily a vampire horror and alternate history fantasy. There has always been a little epic fantasy in its DNA, but that seems to be coming to the fore now, and it fits wonderfully. The “Baltimore” world feels bigger than it ever has before, and I can’t wait to explore it.

Perhaps this larger feeling to the story comes from the large cast of characters being split into two groups. Intercutting between the two gives the series an energy it rarely had before. The pacing here is brisk, but never rushed. Having a team with an established goal right from page, means “The Cult of the Red King” hits the ground running, and by the end of the issue I felt like I’d read more than twenty-two pages. Dave Stewart’s colors are fantastic, as always, but especially as this story flips back and forth between the two groups, his work plays a key role in setting up time and space. You look at a page, and before you even consciously process it, you feel that you’re in another place just from the colors.

This miniseries makes a good jumping on point for new readers, too. Judge Rigo has only been traveling with Lord Baltimore for a month, so he serves the useful role of asking questions long-term readers already know the answers to, but in a way that explores the cast. Through this exposition, readers gain insight into Rigo, Sofia, and Harish. I like it went exposition provokes a reaction in characters that reveals things about them. The way it’s handled, new readers will get all the background detail they need while long-term readers get to delve deeper into the characters.

OK, let’s get into some spoiler territory.

Dr. Rose, Captain Aischros, and Childress were the foundation on which the “Baltimore” novel was built. When the novel’s ending met the comic, they joined Baltimore’s cast, but they haven’t really been utilized much yet. That’s clearly changing in this miniseries. Childress, a friend Lord Baltimore has known since childhood, is Baltimore’s last remaining connection to the man he was before Haigus and the vampire plague took everything from him. But the relationship between Childress and Baltimore has been neglected. Since the end of “Chapel of Bones” (in Baltimore – Volume 4), Lord Baltimore thinks of himself as beyond saving, beyond humanity. And by believing this, he’s effectively making it true.

So I’m very worried about Childress. This book isn’t exactly kind to its protagonists, and I fear Childress may not survive this miniseries… and if he does survive it, I fear how he shall survive it. I find it unlikely he’ll make it through this book unscathed.

“The Cult of the Red King” is off to a great start for readers both new and old. There’s confidence in Bergting’s art now. He seems much more comfortable wearing the mantle of the “Baltimore” artist. The expanded cast has opened up the series. Now heading into its sixth volume, the book feels bigger than ever. Whatever comes next, count me along for the ride.