Can a story have a satisfying conclusion from a subpar issue? 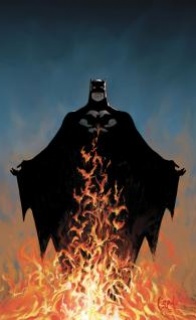 “Batman” #11 does that exactly. “Night of the Owls” wraps up here, and does so in a lackluster way, with some of the weaker work we’ve seen in this series, thus far. However, it also addresses the elephant in the room after last month’s big reveal, and leaves the story in an uncertain place that seems to be reflective of the mood in Gotham. In other words, the arc feels finished, and taken as a whole, something substantial and quite good, even though the issue feels anything but.

Scott Snyder is guilty of the sin of exposition here; nearly half the panels feature Lincoln March waxing eloquent on all things Gotham and Wayne, and each panel seems to have at least a quarter of it taken up by word bubbles. Not that the words being said aren’t good; they’re fine, but there are just so many of them, and the only purpose they really serve is to flesh out March as a character, something I don’t feel was entirely necessary. Because March spends so much of the issue talking, with Bruce listening, it evokes the end of a James Bond film, where the villain is laying out his plan in great detail as the laser comes ever closer to 007.

Except here, it isn’t exactly revelatory information we’re getting. He’s trying to convince Bruce that he is, in fact, Thomas Wayne, Jr, and goes to elaborate pains to show how true this is, despite Bruce’s doubts. As a reader, you either believe him or you don’t; more than likely, his rhetoric isn’t going to sway you either way. Personally, I always saw this as a tactic by the Court of Owls to get under Bruce’s skin, and it turns out, that is what Bruce thinks, too. So, if you’re in the same camp, reading most of this dialogue is like listening to that kid in your class that was absolutely certain there was a Santa Claus – he believes in his heart he is correct, but you just know better.

But the bigger sin here is that the word bubbles limit the space Greg Capullo has to work. Capullo has won me over, big time, and has become one of the most consistently breathtaking artists working at DC. His styling is spot on in all he does, and that continues to be true here, even though he isn’t given too much to do. Sure, there are some great panels – the aerial shots of Gotham are really a thing of beauty due to Capullo’s dense pencils mingling with Jonathan Glapion’s inks and, especially, FCO Plasencia’s colors – but overall, Capullo is tasked with finding interesting ways to present a one-sided dialogue with some punches thrown in for good measure.

Batman’s cape is disposed early on, so Capullo’s favorite prop isn’t at his disposal either. Because of the odd locations (hanging out in the air with a flying plane, in a falling tower), Capullo does what he can, but overall, this is his least interesting issue of “Batman” yet. And with Capullo having killed it throughout this entire series, this ending feels a little anticlimactic.

The two pieces of resolution are nice, however. The first finds Dick Grayson and Bruce talking in Wayne Manor, where Bruce gets his chance to give his side of the story, and he is almost as verbose as his maybe sorta probably not brother. But there are some nice character moments here; Snyder, above all else, knows who these characters are, and writes them as well “in character” as any other Bat-writer of recent memory.

The second is the conclusion of “The Fall of the House of Wayne,” which shows the death of Thomas Wayne, Jr. from the perspective of Jarvis Pennyworth, Alfred’s father. Rafael Albuquerque does a phenomenal job here, evoking a similar contrast in styles (compared to Capullo) to when Francesco Francavilla was doing the backups to Jock’s main story in “Detective Comics.” Unlike those Francavilla backups, however, this story isn’t as essential to the overall plot, and while nice to look at, aren’t exactly revelatory. But it is nice to see Snyder and co. being so dedicated to making this story not an aberration in the long line of Batman stories, but rather one that fits in, sometimes too snugly, to the greater mythos.

And so, yeah, this issue isn’t going to win any awards, nor is “The Court of Owls” storyline exactly the next ‘Year One,’ but it is still a fine arc that firmly established the Snyder/Capullo team as the bar to reach for when writing Batman in the New 52. However, with John Layman and Jason Fabok taking over “Detective Comics” and Gregg Hurwitz writing “Batman: The Dark Knight” (not to mention “Batman Inc” by Grant Morrison and Chris Burnham), the Bat books seem to be in a pretty healthy place for the next year or so. Let’s just hope that the next arc doesn’t sputter out at the end like this one did; as fine as their work has been Snyder and Capullo can do better.

Final Verdict: 6.8 – Buy to complete the arc, but don’t get your hopes up too high