Step aside, Greg Capullo, Becky Cloonan’s got this! 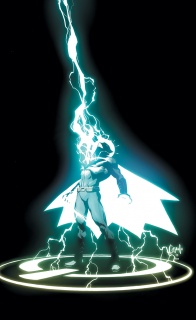 – It’s the epilogue to “The Court of Owls”! – The next major storyline begins here!

Solicitations aren’t supposed to tell you the whole story, but they are supposed to tell you at least the basics about the issue you’re inquiring about. The above solicit for “Batman” #12 is completely false; this is not a new story arc, nor is this really an epilogue to ‘The Court of Owls’ – it is a stand alone story, a quite good one, and it is simply about adding some detail to Gotham City. Not that the solicit is necessarily the best tool in selling someone a comic, but it seems silly that a few months out, DC couldn’t be bothered to get the basic story details from Snyder, especially because the cover was solicited at the same time, and the cover is clearly tied into the story. Is this laziness, incompetence, or simply someone not caring?

Instead of the epilogue to ‘The Court of Owls,’ the issue is really the secret origin of Haper Row, the mysterious young lady seen zapping Batman back to life in “Batman” #7. In that issue, he tells her “I told you once already, leave me alone. I mean it.” In this issue, we are given the complete story of that first encounter, and given hints as to where the character is going in the future.

Harper Row is a young electrician working for the city of Gotham who lives with her younger brother, Cullen. Cullen is beat up frequently because he is gay, and Harper does what she can to protect him. The Row’s apartment building is being torn down so that Wayne Industries can build a new, better building there and, because of that, she gets an invitation to a Wayne Gala. It is at this gala that we get our one and only panel of Bruce Wayne in this entire issue; for a run that has been more about Bruce Wayne than about Batman in a number of ways, this is a drastic change to the series’ status quo. Even Batman only gets a handful of pages here, with Harper and Cullen really being the stars of the issue. Batman shows up to stop the bullies that have been tormenting Cullen, and inspires Harper to try and help him.

Harper is reminiscent of Tim Drake (Cullen’s crush) in a number of ways: they are both very skilled detectives in their own rights, both manage to track down Batman, and (presumably) they will both find themselves aligned with Batman. Despite Batman twice telling Harper to get lost, it seems pretty obvious that she will be a minor player in Gotham for the foreseeable future, perhaps filling a role not unlike the Spoiler (which, of course, begs the question: why not just bring back Stephanie Brown? But that’s a whole other discussion). Her technological expertise, along with her determination, makes her a natural ally of the Bat-family, but with a pretty crowded group of sidekicks, one can only guess where she’ll show up next, but perhaps Talon needs a sidekick?

This issue is proof that Scott Snyder has a pretty solid grip on Gotham City, and it is nice to see Snyder being embraced as Grant Morrison’s heir apparent to be the shepherd of the Bat-books post-“Batman Incorporated.” While ‘Night of the Owls’ wasn’t the blockbuster success many hoped for or expected, it showed that Snyder is comfortable with the big stories, while issues like this show he can also handle the small ones. And with James Tynion IV on “Talon” and Kyle Higgins on “Nightwing,” both former co-writing partners of Snyder, the plan for the Snyder-ization of the Bat-books is becoming more clear.

Although missing from interiors this month, Greg Capullo continues his streak of fantastic “Batman” covers with this electric (pun intended) image. Capullo has quietly become one of DC’s best cover artists, and I would love to see someone else step in and do Batman covers for a few months to see what Capullo could do on some other covers. For a guy that was widely mocked when he was announced on this title, he has become one of the most consistent artists of the New 52, and continues to impress.

That isn’t to say that he’s exactly missed this month, though. Becky Cloonan, a Multiversity favorite, steps in and does a fantastic job bringing her signature style to Gotham. FCO Plascencia and Cloonan work together exceptionally well, and the colors are a change from the usual color palette on “Batman,” to create a much more Cloonan-esque end product. Her work with Harper and Cullen really shows off their sibling love, as well as Harper’s frustration with her situation and Cullen’s fear that he is a drain on his sister. Her facial expressions remain some of the best in all of comics, and she manages to draw Harper comfortably in both her work gear and her dress for the gala; when she’s supposed to look gritty, she does, and when she’s supposed to look beautiful, she does, but she always looks like Harper.

But to discuss this issue is to discuss the bizarre last 6 pages. Not that the story gets weird; it doesn’t, but the book makes an announced and bizarre shift.

Because, perhaps, James Tynion and Andy Clarke are the contracted creative team on the backups, and since this issue doesn’t have a proper backup, Clarke simply takes over art duties as of page 22 (and Tynion is credited as co-writer on those last 6 pages, but that seems like a technicality more than an actual co-writing credit). For the first few pages, the shift actually works, because it features Batman and Tiger Shark battling on a boat in the sewer – a scene more cinematic than anything else in this issue. However, when the action shifts back to the Row home, the art change is jarring. Clarke is a great artist, but it just doesn’t make sense to me. In fact, it would’ve made more sense had Clarke drawn Batman’s earlier appearance in the issue as well, and let Cloonan finish off the Row storyline herself (although it wouldn’t be fair to give her an issue of Batman and never let her drawn the guy in the cowl). But, that isn’t the case, and so we get a weird tonal shift at the end of the issue.

Besides from that, this issue is one of the best of Snyder’s “Batman” run, hitting on just about all cylinders. There is also a nice little bit of meta narrative going on throughout, with Harper talking about the Gotham electrical grid. She basically describes it as a mechanism that is too old and too stretched thin to last without people doing periodic work on parts of it that are frayed or failing in some other way. This is a nice way to look at comic book continuity, especially pre-‘Flashpoint.’ Every now and then a character’s wires start to fray, whether from overuse, underuse, or a pesky, squirrely creator gnawing for too long, and it is the job of the creators in charge of the property to jump in and do a little repair.

But with New 52, it appears that the entire grid has been re-wired, and only the shell of the old system is still in place. While the new system may run smoother, the charms of the old appear to be lost, like so many apartment buildings torn down in the name of revitalizing a neighborhood.

Well, that’s a depressing place to end this review.