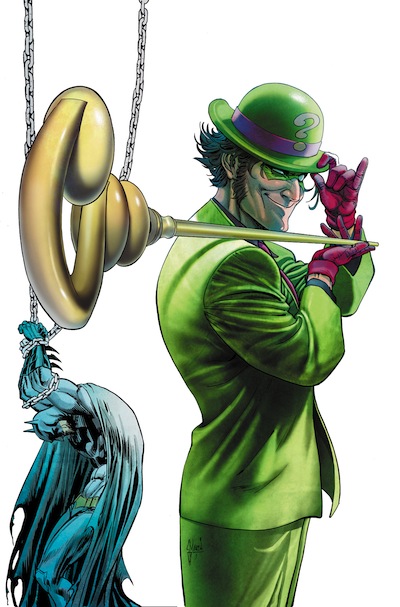 The Riddler jumps out the Zero Year and into Villains Month, as Ray Fawkes and Scott Snyder perfectly demonstrate why Edward Nygma is not a character to be taken lightly. 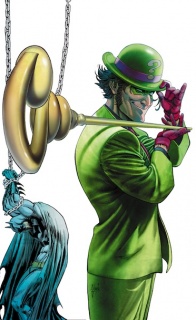 With The Dark Knight out of the picture, The Riddler engages in an epic game of wits. Learn what maddening early moments led a young Edward Nygma to evolve into Gotham City’s Prince of Mischief! And see how events of ZERO YEAR continue to affect The Riddler today!

Edward Nygma, aka the Riddler, has been the subject of many different incarnations throughout the history of DC. He has been a one note villain, a criminal mastermind, a police informant, a reformed baddie, and he even showed up with a question mark mohawk. Through all these changes, he has remained one of Batman’s smartest, and therefore most dangerous, adversaries. A younger version of the Riddler plays a large role in the current ‘Zero Year’ story, and with Villains Month, storytellers Scott Snyder, Ray Fawkes, and Jeremy Haun successfully use the opportunity bring the character into the present.

This issue takes places during the events that follow “Forever Evil” #1. Gotham has sunk to another level of chaos as villains run amok and the Crime Syndicate takes charge with the absence of the Justice League. After a brief flashback to one of many stints in Arkham, the Riddler casually wanders through a protest in front of the Wayne Enterprises building. He has hacked the computer system and easily gains access to the inside, while a carefully timed explosion distracts the guards. The Riddler proceeds to make his way higher and higher through Wayne Tower, bringing terror and carefully controlled chaos with him to every floor. His ultimate goal remains a mystery until the end of the issue, but the reveal is sure to surprise and make readers view the Riddler in a new light. And thankfully, it is not an origin story.

This issue features regular “Batman” writer Scott Snyder on plot with “Constantine” scribe Ray Fawkes handling the full script. Despite the fact that Fawkes does the heavy lifting on “Riddler”, it fits perfectly into the Gotham that Snyder has presented, and even acts a semi-bookend to the current ‘Zero Year’ story arc. The Riddler’s early days were just featured in issues of ‘Zero Year’, and forced the creators to avoid the typical origin stories that are popping up all over Villains Month, instead showing the reader how the bad guys are reacting in the current hero-less climate. The Riddler is simultaneously similar to and different from the Joker. Both enjoy masterminding plans, wearing the color green, and causing general chaos. Where they differ is that while the Joker’s perfect world is one of uncontrolled anarchy for all, the Riddler enjoys chaos only to the extent that he can control it. In that respect, setting this story in the present was a brilliant idea on the part of Snyder and Fawkes, and it is clear from his internal monologue that this was just the opportunity that Edward Nygma has been waiting for.

What is most interesting about this issue is the way that Snyder and Fawkes continually build the tension throughout. In the opening pages the Riddler is jovial and downright merry as he revels in the casual mayhem he created. He relishes every opportunity he has to demonstrate his vast intelligence over those he considers inferior, which is everyone. As he makes his way higher and higher into the tower, the Riddler’s actions become more and more violent. The authors paint the villain as a mastermind, the product of meticulous planning and execution. He remains cool and calm as his plan unfolds, until one tiny element goes awry. One of the workers in the tower physically stands up to the Riddler, and his wrath is instantaneous. The Riddler’s ego is so large, and he is so self-absorbed, that he views all other people as unworthy and inferior. When the other person touches the Riddler, his obsessive tendencies flair up and crack his calm exterior. His brutal response establishes the Ridder as someone far removed from his earlier gimmicky incarnations. Snyder and Fawkes demonstrate that the Riddler is a bad guy to be feared, and just as dangerous as any other Bat-villain.

The art duties on “Riddler” are handled by Jeremy Haun, who has past experience with rendering Gotham City in both “Detective Comics” and “Batman: Streets of Gotham”. The art of Greg Capullo in the main Bat-series is so distinctive and acclaimed, that seeing Gotham rendered in a different style almost runs the risks of being off-putting. Haun’s style doesn’t feature the same surrealist bent as Capullo’s, but nevertheless manages to capture the look and feel of the city. It actually makes sense that the art is void of abstract designs, as this is Gotham seen not through the eyes of Batman or the Joker, but Edward Nygma. His mind is so thoroughly built around order and structure, and the realistic and organized style of Haun’s art is actually a good reflection of the Riddler’s mental state.

One drawback in terms of the art of “Riddler” is that, by nature of the story, the vast majority of scenes are set inside Wayne Towers, which is just like any other corporate office building. It’s a series of boardrooms and offices and beige walls, definitely not the most visually striking location seen in “Batman” recently. This is not to say that Haun renders the office scenes badly or without care; in fact they are well defined and detailed. It’s just that the location brings certain unavoidable blandness with it. This does have the effect, however, of making one gruesome moment at the end of the issue even more jarring, as the visceral nature of the image is truly shocking. Huan seems to relish the opportunity to jolt the readers as the issue nears its end, and it also visually shows a part of the Riddler’s personality that is quite frightening.

In a sea of Villain’s Month titles which feature tired origins, “Riddler” stands out by keeping the story in the present and showing how the Crime Syndicate’s global takeover is affecting Gotham City. Ray Fawkes, with the assistance of Scott Snyder on plot, captures the maniacal and obsessive nature of Edward Nygma, and establishes a place for him in the New 52 that is far from his gimmicky roots. Jeremy Haun brings a different visual style to Gotham then that which is normally seen in “Batman” and while the art is very well done, the nature of the plot confined Haun a little, and it would be interesting to see what he could do with a story set outside an office building. Overall “Riddler” is a very good comic book, and accomplishes the impressive feat of tying into the universe wide event while furthering the story being told in the main “Batman” title.

Final Verdict: 8.0 – One of the better Villains Month releases, “Riddler” succeeds by forgoing an origin story and using the chaos in the present DCU to clearly define the Riddler and all of his obsessions for the New 52.