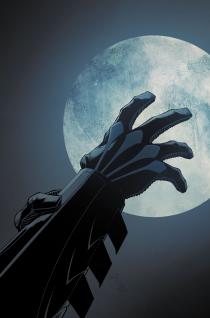 Bruce Wayne takes the most important step yet on his journey towards the cowl in “Batman” #23. 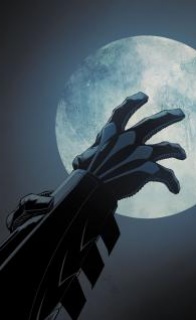 Witness the moment Bruce Wayne becomes Batman as “Zero Year” makes history! And in the backup story, a young Bruce Wayne fights for his life in a death match in Russia!

Origin stories are tricky under the best of circumstances. Audiences have long grown familiar with the standard tropes and clichés that can turn a regular person into a cosmic powered hero or raving villain. It’s even more difficult when an origin story has already been told more than once, and has become part of fabric of an iconic character. Bruce Wayne became Batman because he witnessed his parents murdered by a criminal when he was child. End of story, right? Wrong, and the responsibility of telling the rest of the story is now in the very capable hands of writer Scott Snyder and illustrator Greg Capullo.

This issue of “Batman” is the third chapter in the eleven part ‘Zero Year’, an epic retelling of Batman’s origins for the New 52. Picking up from the previous issue, Bruce Wayne has been corned by the violent Red Hood gang and their titular leader. Ever since his recent reappearance in Gotham City, Bruce has been fighting the gang at every opportunity, proving that he doesn’t need a cowl to do battle against injustice. His one man war against crime has quickly grown more difficult after Bruce’s uncle (and Wayne Enterprises CEO) exposed his return to world, and he now finds that having a famous face is not conducive to dealing out vigilante justice. Bruce is seemingly defeated by the Red Hood and his gang, and returns to Wayne Manor on the verge of death. Beaten and desperate, Bruce searches for a sign, any sign, of how to continue his fight against injustice.

Scott Snyder is a rock star at DC right now. He had the freedom to tell almost any story he wanted, and it’s interesting that he chose to tell one that had already been told. Frank Miller’s ‘Batman: Year One’ was a redefining book for the character, and served as the official origin story for twenty-five years until the New 52 wiped most DC history away. Now Snyder gets to play in this familiar sandbox, and instead of delivering an origin for sake of doing a new origin, he adds even more depth to the Batman mythos and makes the impact of the Wayne’s death even larger. The murder of Thomas and Martha Wayne was not just the important moment in Bruce’s life, but the most important moment in the history of Gotham. If the two most powerful people in the city could be killed by some unknown thug, it proves that anyone could turn to crime and evil ways, and attain an incredible amount of power. The Red Hood saw that Gotham was a corrupt and diseased city, and all one has to do is embrace the darkness and the chaos and in order to become seeming unstoppable.

Snyder takes full advantage of the fact that this story takes place six years before the present of the DC universe when it comes to his characterization of Bruce. Far from being the brilliant detective/charming playboy-philanthropist that readers are familiar with, younger Bruce is brash, aggressive, and consumed with rage. He’s a blunt instrument in need of a polish. When confronted by the Red Hood, Bruce spits right in his face (or hood in this case), and does little to hide his anger. Snyder crafts a story to show that Bruce needs Batman to control his own emotions and impulses, and without the cowl Bruce is a pile of raw nerves. In less skilled hands Bruce could come off as petulant and downright selfish, but Snyder lays out the strong character arc that will see Bruce realize that he needs to play a duel role to make Gotham into a better place, and raw anger just isn’t enough.

Greg Capullo is well on his way to being one of the defining Batman artists. He has been able to draw new characters designs, reinvigorate classic characters like the Joker, and now he gets to take a much longer and more detailed look at the young Bruce Wayne than any artist before. He continues to be at the top of his game in “Batman” #23, and the story plays right into his strengths as an illustrator. Capullo excels at drawing things with a slight surrealist bent, and as the issue reaches its climax the pages open up into wide spreads as Bruce activates the cave mapper that he used in the previous issue, projecting a ghostly image around the room. The lines become more blurred, but Capullo never stops paying attention to detail. One splash page of Bruce in front of an open window, embracing his destiny, is particularly breathtaking.

Bruce Wayne’s confrontation with the Red Hood Gang provides another opportunity for Capullo to demonstrate his ability to create extremely visceral and graphic images. Bruce is beaten to pulp and the reader feels ever hit and blow, making the impact of the scene incredible. Capullo’s eye for detail is tremendous and carries on throughout the issue. At the beginning, Bruce takes a blow to the face that splits the skin of his cheek open, later the same wound is being stitched up, and at the end of the issue it is swollen and bruised. This isn’t just a fight just for the sake of having a fight in this issue, it’s a pivotal moment for Bruce, and Capullo’s images make the audience feel the impact, both physically and mentally. Special mention should also be made of colorist FCO Plascencia, for his stunning work throughout the issue, and especially during the big fight scene. The Red Hood sets off an explosion and the whole scene is engulfed in flames that last for pages and it looks just incredible.

The third installment of the ‘Zero’ Year features possibly the most important moment in the Snyder/Capullo run on “Batman”, the moment when Bruce realizes his destiny. Scott Snyder has written a story that honours the past origins of Batman, while adding plenty of new depth in the wake of the New 52. It would have been easy to brush past Batman’s origins, and let the seminal ‘Year One’ remain in a hazy mist of continuity issues, but instead they chose to tackle the birth of the Bat head on. There was the potential for it to be repetitive at best and boring at worst, but instead the story is captivating. The creative talent behind ‘Zero Year’ know exactly what they want to accomplish, and Batman #23 stands as testament to their talent.

Final Verdict: 9.0 – Snyder and Capullo are operating at their highest level yet, and “Batman” #23 feels fresh, familiar, and exciting all at the same time.