The Riddler has complete control over Gotham, and the Dark Knight is nowhere to be found, as the final chapter of ‘Zero Year’ begins in “Batman” #30. 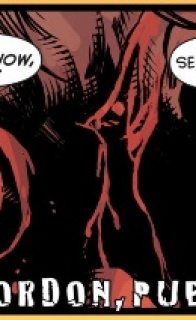 The ‘Zero Year’ arc has quickly become that the most epic Gotham story line in years. Even Grant Morrison’s six year run writing Batman consisted of multiple books, limited series, and new titles, the majority of which function on their own as well as part of a larger whole. ‘Zero Year’ is a year long story, told in the main “Batman” book, and set for in the past so that the story doesn’t cross into current continuity. ‘Zero Year’ is a beast unto itself, and as the end gets closer, it keeps getting bigger and more impressive.

After the cataclysmic battle with Dr Death, Batman is missing, presumed dead, and Gotham has fallen under the total control of the Riddler. Edward Nygma has cut off the city from the outside world, flooded the tunnel and rigged the bridges to explode. This is the world Bruce Wayne finds when he finally regains consciousness, and frantically tries to find allies in the decimated city. Lieutenant Gordon has been reduced to a one man army waging a guerilla war against Nygma, and finally gets word that outside help is coming, but it might be too little to late to stop the Riddler.

There was a time when comic storylines frequently reached a dozen issues in length, but this was mainly to flood a collectors market and not because it was best for the story (looking at you, ‘X-Cutioner’s Song’). What sets ‘Zero Year’ apart is how carefully Scott Snyder has structured to the plot, and the result is a story that feels epic, without being bloated are slowly. The three act structure of the story largely avoids the possibility of moronity, as it gives Snyder the opportunity to build in mini-conclusions and cliffhangers, while feeding the larger story. As the entire story starts to come into focus, it’s incredibly impressive the amount of detail that Snyder has built in from the very first issue.

As Gotham plunges into a dystopia, cut off from rest of the country, it’s not hard to spot the the parallels to The Dark Knight Rises. What sets it apart is that while Bane was a physical opponent to Batman and led a small army against Gotham, the Riddler challenges the Dark Knight on a mental level. While it’s easy for lazier writers to paint Batman as an angry guy who punches people, Snyder has never forgotten that he is supposed to be the world greatest detective, in addition to being an angry guy who punches people. The Riddler’s particular mix of narcissism, OCD, and plain old psychopathy gives him a need to prove that there is no riddle he can’t crack. The way that Nygma deduces the latest challengers riddler points to the extreme level of his own detective skills, as all he needs are a couple basic clues to deduce the answer in a matter of seconds. With this one scene, Snyder has painted the Riddler as one of the most deadly villains Batman has faced during his time on the series, because while the Dark Knight always wins in a fistfight, Nygma might be able to outsmart him before the fight even begins.

Greg Capullo has expertly pencilled Gotham City for over two dozen issues, and this issue gives him a chance to show off a different side of world building skills. Capullo draws a Gotham that has been overrun with vegetation and urban destruction. Poison Ivy hans’t popped up in the Snyder/Capullo run, so this issue is a great break for the artist to not have to the draw the same skyscrapers and dark alleyways, and Capullo can draw a damn good tree. The newly green city quickly the site of large scenes of destructions, as the Riddler triggers expositions that level a building. Capullo manages to infuse the scene with a real feel of weight and power, it’s not just an exposition for the sake of an explosion, but adds to the tone of the issue.

The character designs get a bit of a dystopic makeover, as keeping laundromats open apparently wasn’t on the Riddler’s to-do list. Jim Gordon shows up looking appropriately shaggy, with his trademark mustache still intact, and the remaining Gothamits are a ragout bunch to say the lest. Capullo wisely resists the urge to go of full Cast Away, so no one suddenly has a ZZ Top beard or anything like that. Capullo’ art makes the Riddler’s take over seem more realistic, and less fantastical than a super-villain conquest could be, and all that more terrifying.

“Batman” #30 begins the third and final act of ‘Zero Year’, and shows Scott Snyder and Greg Capullo operating at the peak of their skills. Snyder has laid out a detailed story, and filled it will great character moments, while Capullo spends every issue finding new interesting ways to render Gotham and its terrified inhabitants. The conclusion of ‘Zero Year’ is getting closer, and Snyder and Capullo seemed poised to deliver something thrilling and impressive.