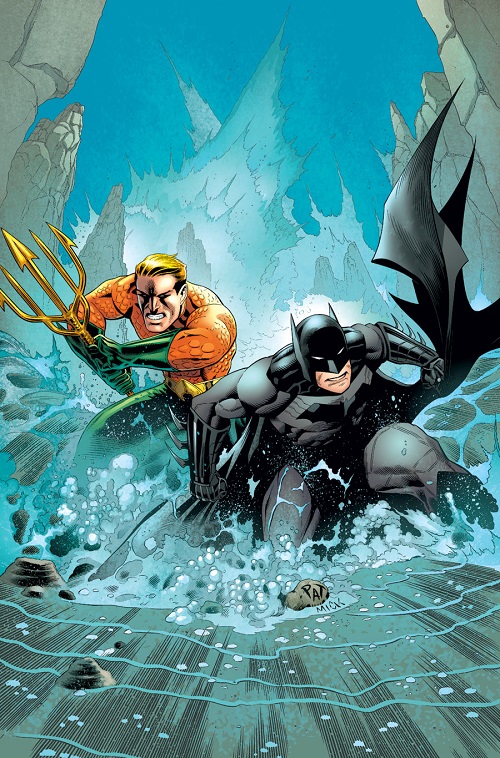 Regrettably, “Batman and Aquaman” #29 is not a series that’s been running for twenty-nine issues. Instead, it’s a new issue in the “Batman And…” series dealing with Robin’s demise. Will it be as fun as the title implies or another victim of New 52 grittiness? Read on to find out! 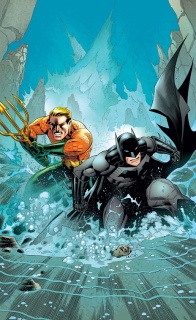 Batman is ready to settle the score with Ra’s al Ghul, who stole Robin’s body out of the grave! As the Dark Knight travels to the island where Damian was born, he’s set on a collision course with Aquaman!

I feel, as a professional, that I only chose to review this comic on title alone. My love for Batman: The Brave and the Bold is well documented and any chance of seeing Batman and Aquaman hang out and be crime-busting buds. Unfortunately, “Batman and Aquaman” #29 doesn’t exactly lead to the hijinx I was expecting, but I did find some high-concept action at work here that reminded me of my ideal version of the caped crusader.

Following on from the events of Batman Incorporated where – not really a spoiler – Damian and Talia died and their bodies were stolen by R’as Al Ghul, the “Batman and…” series is now undergoing a global adventure to tie-up some loose ends. The Batman here is pulp as hell yet still in line with the gritty Dark Knight that has been prominent throughout The New 52. That concept of pulp flows through the rest of the book that not only organically ties in forgotten details from Morrison’s “Batman Inc.” run (there’s an excellent way Tomasi brings in Aquaman while making him relevant to the plot) but gives us some truly disgusting art from Gleason. Gleason, I feel, has always been a great fit for The Dark Knight (the initial run of this series focusing on Bruce and Damian showed his skill in making a dark setting and cast that never fell into the trap of trying too hard to be gritty) but his work in recent issues shows his adeptness at creating some truly disturbing creatures. To quote Rick and Morty, Patrick Gleason is a master at making “Cronenbergs.”

That balance between pulp and horror is probably the biggest selling point of the current “Batman And…” series. Yes, the plot’s honestly pretty solid (a crusade against keeping R’as Al Ghul from making an army of Damians is some seriously compelling stuff) but sometimes the dialogue is just painful. Upon finding out that Batman’s discovered his lair, R’as Al Ghul says the actual line “So, it seems the detective has done some detecting…”

How. How did Peter J. Tomasi, who I know is a good writer, put those words in a  script and then have more than zero people approve of it. There’s some great lines in there (“I am blood of his blood too, Batman. Rest assured Damian is in good hands.”) but that line, in addition to some truly exposition heavy shlock and Aquaman’s continuing insistence that they watch R’as scream, really detracts from the overall experience. Which is a shame because, real talk, Gleason alone could sell this book. In addition to The Cronenbergs there’s a some truly majestic ocean shots and a ninja sequence that brings Bruce Wayne back to the “Bat-God” form of Batman that has been so sorely missed.

Really, that might just be “Batman And…”‘s biggest fault. Visually, it’s an excellent book both in terms of aesthetics and storytelling. When it comes to dialogue though, the book becomes really awkward at points. Even beyond the redundancies, there are these character tics that just begrudgingly remind the reader that they’re in The New 52. Aquaman cursing? Yeah. Batman being a jerk? Yeah. A Channel 52 segment in the back advertising that “Evil Superboy” thing? Ok that’s not “Batman And…”‘s fault but I’m still upset some of my money went to that.

I don’t want to sound too negative here, if I had to recommend any “Batman” book from DC right now, it’d probably be “Batman And…” It’s a bonafide pulp adventure that’s expanding upon the Morrison mythos in some intriguing ways with some truly stellar art, even if it’s decidedly clunky at parts.

So, no. In that respect, “Batman and Aquaman” isn’t the Brave and the Bold reunion I was anticipating, but considering that the entire plot revolves around Bruce searching for his son’s corpse, I doubt we were going to get Aquaman Family Roadtrips or cameos from Jeffrey Ross. A boy can dream.