This month’s “Batman and Robin” finds us squarely in the Night of Owls, with Alfred’s distress call being heard by young Damian Wayne. Robin is designated to protect Major General Benjamin Burrows, one of the 40 targets the Bat family is trying to save from the Talons. 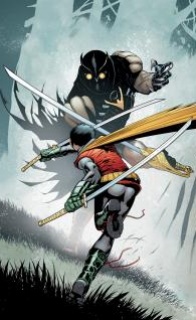 – NIGHT OF THE OWLS continues here!
– ROBIN faces TALON alone with the skies of Gotham City at stake!

The Night of the Owls crossover is a somewhat inspired one, in the sense that you needn’t read any tie-in issue that doesn’t personally appeal to you, since the main story is in “Batman,” and these are just side tales that help add some scale to the attacks. And, if you’re a regular reader of one of these series, you get an (hopefully) enjoyable one and done story that doesn’t disrupt the book’s flow too much.

I am not a regular reader of “Batman and Robin,” as Peter Tomasi’s run on the pre-rebooted title left me cold, and I get enough Batman between Scott Synder’s title and his appearances in 2 Justice League titles. My only grievance with not reading this book is that it means I rarely get to encounter Damian Wayne, everyone’s favorite petulant pre-teen reformed assassain.

And while it was nice to see him Damian-ing it up around Gotham, I don’t think Tomasi is the guy to be writing him. Under Grant Morrison’s pen, Damian was both an 11 year old and a highly trained assassin. Here, with the exception of his youthful arrogance, there is no sign of that child inside of Robin. And, if there is none of that present, then Damian is just a cold, distant sidekick and, frankly, I have little interest in reading that.

Tomasi has Damian commanding a military battalion, something every young boy has imagined, whether from playing a video game, or playing with their friends in the backyard. I know that Damian didn’t have a regular childhood, but there should be at least some smirk of joy in his face to finally be actually commanding an army. But instead, we just get robot Damian, content to be boring and dull.

There are a few fun Damian-isms, like the fact that when Alfred calls he is seemingly using a metal detector in the sewers of Gotham. Of course, that nice bit of characterization is thrown away by having him use the phrase “a wing and a prayer,” which is both a phrase Talia would never have programmed into him and I can’t really hear Bruce saying around the cave. Under another pen, he would look at that phrase as painfully optimistic and naive.

Tomasi has recently become a writer relying on militaristic stories in his comic book work. This isn’t a good or a bad thing, just an observation. Under his pen, the rebooted “Green Lantern Corps” has basically been a space war book, with themes of collateral damage, using lethal force, and weaponizing the enemy. The Green Lantern Corps has always been described as “space cops,” but Tomasi has made them the “space military.” His fascination with the military continues here, with mixed results. I don’t think that adult soldiers, especially a Major General, would be as willing to follow the orders of a child. That is addressed in one line of dialogue, and then everyone just falls in line because, why not?

Lee Garbett does a fine job on pencils, even if some of his angry faces look like the characters are channeling their inner Solomon Grundy. Andy Clarke handles the Talon’s flashback sequence, and his style fits the sequence really well. The art in this issue is well done, but feels a little generic, which is partly the fault of the script as well – soldiers in the woods isn’t exactly the most interesting thing to draw, and that is 80% of this issue.

I know that books with “Batman” in the title sell, but this is a title that really doesn’t need to be in existence right now. Sure, it is nice to give us stories where Batman and Robin are solving crimes together, but Robin could easily guest in one of the flagship Batman titles (“Batman” and “Detective Comics”), thus leaving this title to go the way of the dodo or, to please a segment of the audience, to become a Robin solo book. There have been rumors of a “Robins” book, where multiple former and current Robins would be teaming up, and I think if done right, that could be fun.

Damian Wayne is a character that went from reviled to revered to reshelved – there is almost nothing essential happening with the character right now. I expect Grand Morrison’s “Batman, Inc.” to rectify that in two weeks, but this is really a spot where the DCnU dropped the ball. A well written story, even if not the focal point of a franchise, can steal the spotlight and enliven the fan base (look at Snyder’s “Detective Comics” run). However, this title continues to be a second class Bat book, and with the lackluster stories Tomasi has been writing continuing for the time being, I can’t see it getting an upgrade any time soon.