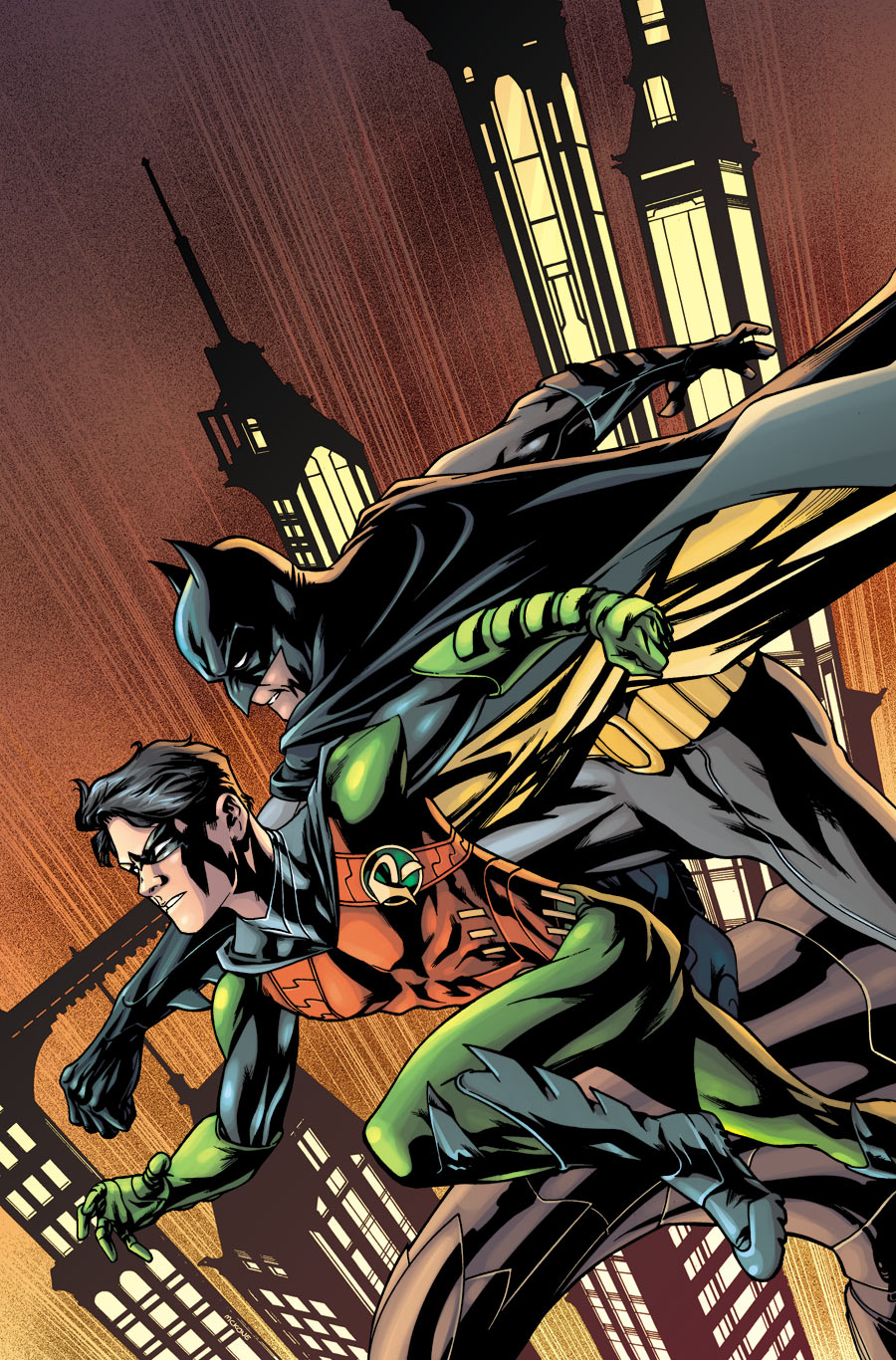 The first Robin gets a chance to shine as Dick Grayson’s first week in the red and green tights is spotlighted in “Batman and Robin Annual” #2. 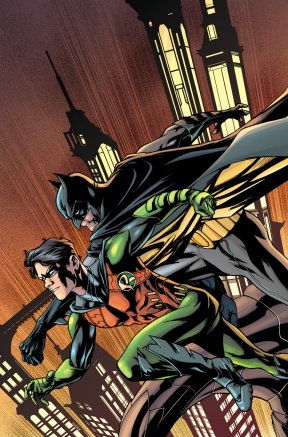 A YEAR ONE ADVENTURE OF DICK GRAYSON AS ROBIN! Bruce Wayne and Dick Grayson have shared a distinctive crimefighting role: Both have played Batman to a young Robin, so when they discover something important that Damian left behind it leads them to relive one of their first adventures in Gotham City as Batman and Robin!

Given the massive overhaul that the continuity of the DC Universe experienced at the launch of the New 52, it’s a bit surprising that Dick Grayson remained as Nightwing. In a world suddenly without Wally West, a brand new Superboy, and no Stephanie Brown, the fact that there were four Robins at play seemed downright strange. If it wasn’t for Grant Morrison’s ongoing “Batman Incorporated” and the ensuing plans for Damian Wayne, it’s very likely that Dick Grayson would put the yellow cape on once again, and Damian, Tim Drake, and Jason Todd, would just be a memory. Instead, Dick Grayson’s time as Robin exists in that ever present five year haze of history. Now those days are getting the spotlight treatment in “Batman and Robin Annual” #2.

Taking place after Damian’s death and the events of “Forever Evil”, so Dick Grayson is living in Chicago, and his identity as Nightwing is still a secret. Bruce locates a box Damian left for Dick, hidden up in the crawl space of Wayne Manor. Dick comes to town to said box, and recalls the time he told Damian about his first week as Robin. The issue flashbacks to teenaged Dick Grayson, staring at the clock at school, until he can return to the Batcave and put on his costume. Bruce is finally letting him accompany the Dark Knight on his nightly rounds, with incredibly strict instructions. Of course things go a little wrong, and Dick and Bruce get mad at each other, but it’s clear that their partnership is just beginning,

Peter J. Tomasi has been the writer on “Batman and Robin” for over thirty issues, going back to the pre-New 52 days, and has accumulated tons of experiences writing Batman and the many Robins. He has their relationships down to a science, so it feels really natural when they interact. The opening scene featuring Dick and Damian hones back to their banter when they were the Batman and Robin. It only last for a couple pages, but the brief look at their partnership is a highly enjoyable reminder of how great they were. The story benefits from exploring uncharted territory in Bat-history, and seeing Dick in his younger days feels very refreshing. Tomasi writes Dick in a way that sticks true to his trademark humorous and relatively lighthearted personality, and the impatience and impulsiveness showcased by the younger version of the character feels very appropriate for his age.

What feels slightly off is the way Dick enters the story in the present. He left Gotham under extremely tense circumstances, furthering the frequently fractured relationship between Dick and Bruce as adults. The way he just sort of saunters back into Gotham, as if nothing has happened, just doesn’t. It’s possible in the long run this might actually help the story seem more timeless, but given the fact that the Bat-family in undergoing massive upheaval in other book, their actions here feel oddly sedated.

The art is handled by Doug Mahnke with an assist from Pat Gleason, who goes uncredited on the stories cover, suggesting his involvement was a late addition. Mahnke made a name for himself with his collaboration with Geoff Johns, illustrating “Green Lantern” with little interruption for nearly four years. The point is, Mahnke knows how to draw superhero comics, and the vast majority of the issue is very well illustrated. The action scenes are very well paced, and prove that Mahnke can handle small conflicts just as well as intergalactic battles with power rings. Dick’s fighting is aerobic as ever, and has a real sense of motion without being pose-y.

Mahnke makes the issue’s lighthearted moments even more enjoyable. Dick’s facial expression while at school will be familiar to anyone who’s ever been a bored teenager, while his early attempt at a costume foreshadows his role as Nightwing, will highlighting his tendency for the theatrical. If there’s one complaint to be had, it’s that Bruce Wayne looks like he’s a forty-five year old man, when the New 52’s compressed timeline means he should be about thirty. Come to think of it, throw a gold cape and some red tights on Bruce, he’d look exactly like Shazam.

Given the big changes that “Forever Evil” has in store for Dick Grayson, a long flashback to the beginning of his crime fighting career feels like a nice bookend before his identity is made public. Peter J. Tomasi knows how to write a good story with multiple members of the Bat-family and remain true to their core characteristics. And seeing him have the chance to write for Damian Wayne one last time feels very satisfying. Mahnke, with the help of Gleason, pencils an issue that meets his usual high standards, minus an old Bruce Wayne here and there. This is an Annual, and won’t play into any of the ongoing stories in any the other Bat-books, but the issue is an enjoyable read if only for the novelty of seeing Dick Grayson as Robin one more time.

Final Verdict: : 7.5 – Browse. A solid issue, with only a few minor kinks here and there. Any reader who wants a deeper look at some unexplored Gotham history will enjoy the issue, but given it’s lack of impact on the much larger Nightwing/Batman stories and the increased price, it isn’t quite a must buy.