DC’s first wave of annuals are here, with critical favorites “Animal Man” and “Batman” being the first to get the extended treatment. This 38 page Mr. Freeze-centric story is not really a Batman story, for a couple of reasons, but regardless how it is labeled, is it worth your $4.99? Be warned, there are spoilers discussed, specifically dealing with a change to Mr. Freeze’s origin, so proceed with caution. 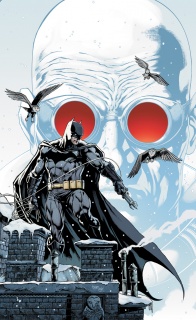 – MR. FREEZE is introduced to The New 52!- What is Mr. Freeze’s relationship to the COURT OF OWLS? Is he an ally — or do they want him dead?- “NIGHT OF THE OWLS” continues here!

The story picks up on a young Victor Fries, walking with his mother to a snowman building competition. It is hard to look at young Victor and not see William Arcane, from Scott Snyder’s other DCnU book, “Swamp Thing” – the likeness is quite striking, though I don’t suspect it was intentional at all. It is on the way to this competition that Victor’s mother falls into a frozen lake, where the ice preserves her until help comes.

This isn’t to say that Victor’s wife having a terminal illness and needing to find a cure for her isn’t still a part of his origin. It is; it just takes on a twist that, honestly, I’m not sure how I feel about. But, we’ll get to that later.

A really nice piece of characterization for Fries is that, in this incarnation more than ever, he isn’t a Batman villain – he is a Bruce Wayne villain. Wayne is the one who cut off his funding and had him arrested; Batman is simply standing in the way of Fries taking his revenge on Wayne, and that is an interesting dynamic, if not a bit of a huge hint to Fries that the two are actually the same guy.

And you can see why Fries is so upset – Wayne is sort of a dick in the flashback scenes. Yes, he has every right to fire an employee that doesn’t do the work he was hired to do, but he is pretty cold (pun intended, said in Ah-nold voice) in the way he fires Fries. The reason he fires Fries is that he keeps doing research to try and invent a formula to bring his frozen wife back from her frozen state, so she can have life-saving heart surgery instead of the work that Wayne wants him to be doing.

That formula winds up being an integral part of the ‘Night of the Owls’ storyline, as it is the formula that Fries created that the Court of Owls use to bring their Talons back to life. This is a detail that probably wouldn’t have too many fans scratching their heads, but is a nice bit of Snyder business – he is a master of taking every last detail fit together, even if it doesn’t appear to be the most natural fit.

Here, Synder is joined by James Tynion IV, who is co-writing the backups in “Batman” right now. Obviously, it is hard to see where the separation of work is, but the two clearly work well together. Tynion looks to be poised to be the next Kyle Higgins, who got his start co-writing “Gates of Gotham” with Snyder, before eventually tackling “Nightwing” and “Deathstroke” (well, before Rob Liefeld got his wish).

Besides the aforementioned formula, the story also ties into ‘Night of the Owls’ as it takes place that very night. This must be a bear of a night for the heroes of Gotham; Fries encounters Nightwing, Robin, and Batman that night, all of whom are on their second or third villain battle of the evening. I understand the appeal of having this tie in so closely, but this seems like a bit much for one night.

Having Dick Grayson and Damian Wayne show up is nice though, because Snyder and Tynion nail the relationship between the two, with Dick being his usual gregarious, talkative self, and Damian being the impatient, headstrong kid he is. With Snyder steering the Bat-ship, more or less, I hope that he gets the opportunity to bring these characters into the main Batman book more often, as he, along with Grant Morrison, is one of the few people who have proved they can write all three of these once and future Batmen.

And speaking of guys doing great work, Jason Fabok, a name I was almost completely unfamiliar with, nails just about everything in this book. His flashback sequences to Fries’s youth are perfectly stylized, his Arkham is spot on, and, most importantly, his Mr. Freeze action sequences manage to look both terrifyingly cold and yet remain not-cartoony. Mr. Freeze can be a silly villain, yet here, much like in Batman: The Animated Series, you really see the humanity behind his motivations, and when done right, his power set can be scary. Fabok manages to make him legitimately frightening, and that is hard to do.

In fact, the only character that Fabok doesn’t totally kill it on is the Penguin, and I think that is really just a byproduct of having Syzmon Kudranski draw the definitive Penguin just a few months ago in the “Penguin: Pain and Prejudice” miniseries. Fabok is also doing the “Justice League International” annual in August, and I look forward to seeing more of his work in the future.

There are only a few things I didn’t like in this annual, and one of them is the insistence that Bruce Wayne only returned back to Gotham and started being Batman six years ago. I know I’m a continuity geek, but 4 Robins in 6 years is absurd. Why can’t Batman just be the one hero that started in the shadows, therefore allowing him another couple of years? /nerdrage

And then, there is the retcon I mentioned earlier (retroactive continuity, or changing a character’s past, for those not in the know). And, again, spoilers abound, so watch out.

Here, Nora, the love that drives Fries, is not actually his wife. Or, even a woman that he knew. No, she was the first cryogenically frozen person, the topic of Victors thesis, and the reason he started to work for Wayne Industries. But Fries became obsessed with her, and is “in love” with her, despite never meeting her.

This lends some credence to the idea that Fries is unstable, and therefore, more likely to become a villain, but the story of a man trying to save his wife’s life, at any cost, is far more compelling to me than a psychotic obsession is. And that’s a shame, because Snyder has been so careful to weave new ideas into old continuity without destroying anything worthwhile so far. But, the more I think about this, the more I wish they had let this one go; sure, it isn’t Greedo shooting first bad, nor does this completely destroy the character for me, but it doesn’t mean it needed to be done, either.

Overall, this annual is another good tie in to the ‘Night of the Owls’ storyline, with good art and nice characterization, but removing Nora and Victor’s actual love from the equation drops this grade down a bit for me.

A final note on the cost – at $4.99 for 38 pages of story, the cost per page is actually the lowest of any book DC is currently publishing.