The second annual of “Batman” promises a tie-in to Scott Snyder and Greg Capullo’s ‘Zero Year’ storyline currently taking place in “Batman”. Yet, the story it delivers is both nothing like what it promises and much better than what it promised. Funny how things work out. 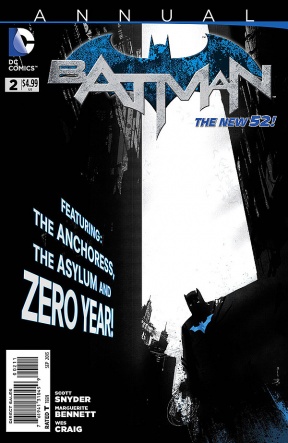 Have you ever been promised something and then found out when you got said thing that it’s not remotely like what you were promised? Then you realised that what you got is actually much better than what you were promised? That’s kind of what I’m experiencing with “Batman Annual” #2. DC’s solicitations for July promised an annual written by Scott Snyder with art by Aaron Lopresti that would tie into ‘Zero Year’. Instead, the annual we got is written by Margeurite Bennett while Snyder only gets a story credit, the art is by Wes Craig and the connection to ‘Zero Year’ is all of one page. And yet, none of that is an actual complaint about the book. In fact, the book itself is good. It is very, very good.

This is, as far as I’m aware, Margeurite Bennett’s first work for DC and it easily one of the strongest starts that the company has seen in a long time. With the guiding hand of Scott Snyder to, presumably, keep the plot concordant with the DC Universe, Bennett is able to find her footing very easily and set off running with the story. The story itself is a self-contained tale that traps Batman in Arkham Asylum with a deadly new enemy. It really should come across as something we’ve all seen done time and again in the past, but there’s something about Bennett’s voice in this issue that makes it so enjoyable. The villain of the piece that Bennett introduces here is the Anchoress who might be one of the most effective new Batman villains of the New 52. Not only does her appearance, perfectly rendered by Wes Craig, give the sense of an almost haunted, withered look, but Bennett uses the Anchoress to explore Batman’s tragedies throughout his life. The sequence where the Anchoress picks apart Bruce’s mind is worth the $5 price of admission alone because of how tragically haunting it is. It’s rare enough to see pages like that, that crawl underneath your skin and hit you right where the love for the characters comes from, come from industry legends, but to see it from a writer this early in the game? That’s something else.

It’s not just Bennett who impresses here, though, as Wes Craig’s pencils do not disappoint. The style is not what one would expect from a Batman comic, it doesn’t draw from a dank and depressing and opressive atmosphere. Instead, Craig’s pencils are very clear and crisp and really conveys the feeling of claustrophobia from being trapped in a facility like Arkham. And, again, the sequence in which the Anchoress picks apart the mind of the Bat is something to behold thanks to Craig’s pencils. It’s a shocking and haunting dream-like sequence and it really is the centrepiece of why this book works. While it wasn’t the book that was promised, both Bennett and Craig clearly have crafted a story that not only works, but takes material we likely have seen before and puts a new slant to it. If there’s any complaint about that art it’s that it perhaps lacks the atmosphere most readily associated with Batman stories through much of the book. While it certainly picks up as the story builds to climax, and, as stated, works on certain pages, but for much of the build up there’s just something missing. It’s not enough to break the book, it just feels a little too clean for a Batman book.

All in all, this is a really surprisingly good story, but it definitely begs the question: was there much point for this? DC has a whole line of Annuals for their books, sure, so it’s not like this is only Annual coming out which really helps the book’s case. If there weren’t Annuals coming out for most every book DC publishes that would certainly make this feel a lot more pointless, but because there is it feels more like a welcome one-and-done story that was surprisingly well put together. You could almost say that it wasn’t the book we need right now, but it is the one we deserve. Or you could, instead, say that this is a very promising start for a new creative talent who handles a weighty book and character voices well and was joined by a fitting collaborator. Even if it was a very different final product than what was promised.

Final Verdict: 7.9 – Buy to support new talent, especially female talent, but that $4.99 price tag is a bit hefty for what is essentially a well done one-shot.