DC surprised readers on Tuesday when they announced “Batman Li’l Gotham,” a new digital first series of holiday specials from the mind of Dustin Nguyen (with an assist from Derek Fridolfs), especially because the first installment dropped the very next day. “Halloween” is a tale of Bruce and Damian out on patrol on All Hallow’s Eve, where Bruce gets to teach Damian about Halloween, as well as snag some baddies. 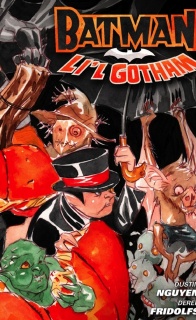 It’s October 31st, but Robin needs Batman’s help to learn the true meaning of Halloween…CANDY! And will Robin be able to tell the difference between the real evildoers and costumed children, or will the kids get clobbered while the villains escape?!

DC’s digital first series has been an interesting experiment; it is a place to explore niche areas of the DC brand, from the “Beyond” series, to video game, toy and television tie-ins. And then there is this: an all-ages, non-continuity series of holiday specials done by a beloved artist. This marks the third (of seven) Bat-series in the digital first line, and while I don’t know if digital is the best place for an all ages, watercolor painted series, this is a welcome book for a few reasons.

First of all, this book is flat-out gorgeous. Nguyen is an extraordinarily talented artist, and having him use watercolors is a an inspired and unexpected move. It gives the already kid friendly book a dream-like feel, and takes most of the menace out of the Bat-characters. It would be easy to point to projects like “Tiny Titans” or “JL8” as comparisons, but this is different than both of those, too. “Li’l Gotham” shows the characters you know and love acting in the way you know and love, just with some of the edge taken off them. Sure, there are little in-jokes and nods to past continuity, but the desired effect of this book seems to be perfectly clear: fun Bat-stories, done around the holidays.

Halloween, the subject of a classic or infamous Bat arc (depending who you ask), is the first holiday to get this treatment, and the bulk of the book is Bruce explaining the holiday to Damian. He goes back to the pagan roots, as well as just admitting “Ok fine…it’s about dressing up and getting candy.” Seeing Bruce as teacher (even shown with a tweed coat, still with fins on the sleeves, lecturing Damian), only to have him cut to the chase and say it is about candy is such a cinematic moment, you can almost hear a record screeching to a halt. It is a fun play on the traditional Bruce/Damian relationship, without flipping the script too much, nor playing into an easy situation. It is simply a fun take on the characters, not a reinvention of a character.

The other half of the story deals with a meal being shared between some of Gotham’s most infamous citizens. The villains can all eat dinner out on Halloween, since everyone else is in costume, they can blend in. It is a fun scene, and has a nice ending that brings in another classic Gotham character.

Overall, this book is fun to look at, fun to read, and overall, a real boon to DC’s digital line. I hope that these are collected eventually in print, so I can easily share them with my daughter in a few years. But for 99 cents, you can’t afford not to go for it right now. Viva Nguyen!