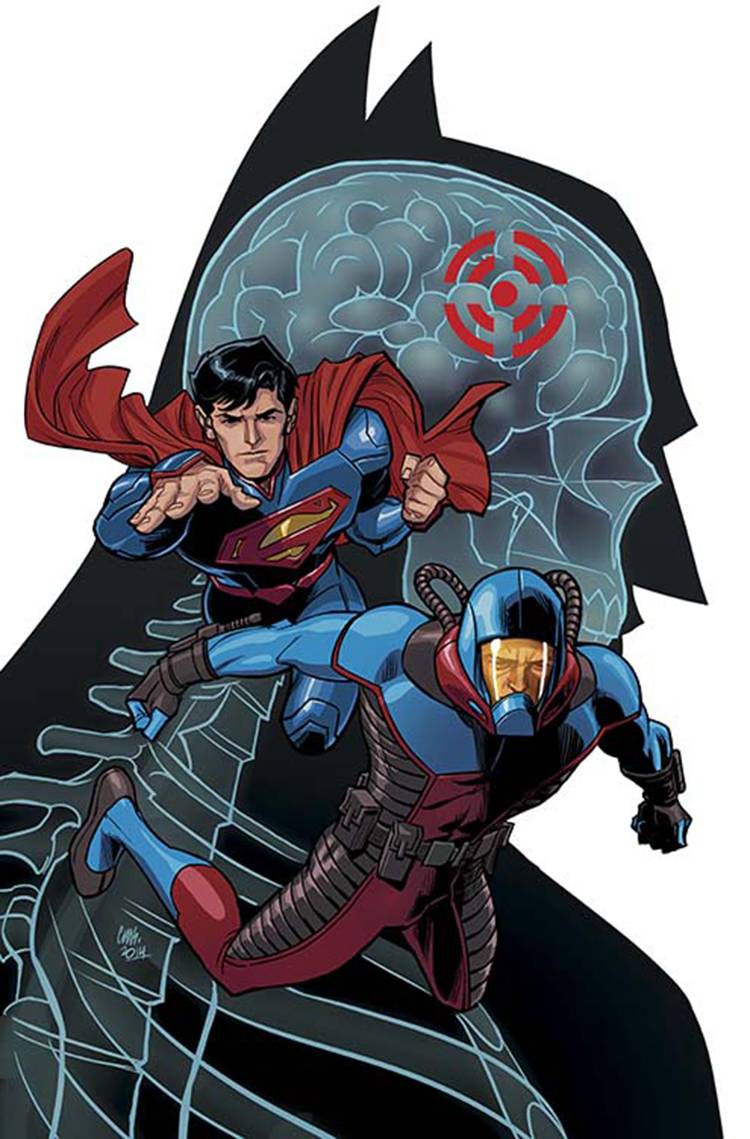 Superman is joined by new ally Ray Palmer as they take a fantastic voyage back to the Silver Age, and inside Batman’s brain, in “Batman/Superman” #10 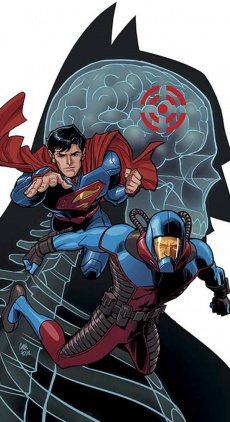 In this stand-alone story, a microscopic threat invades the body of The Dark Knight, and it’s up to The Man of Steel and Dr. Ray Palmer to shrink down and eliminate the danger. But what they find will shock you! Get ready for big sci-fi thrills and high-adventure fun as only BATMAN/SUPERMAN can present!

There was a time when Batman and Superman were not just uneasy allies or, at the worst of times, outright enemies. Instead they were total BFFs. Through over 300 issues of the “Worlds Finest” series, Batman and Superman got up to all sorts of wacky shenanigans, from hidden kingdoms to mind control and reverse aging. Than Frank Miller had to come along and have the two beat the crap out of each other. The Bat and Supes team books since then have placed their conflicting personalities and ideologies at the forefront, sacrificing the old-timey adventures. With “Batman/Superman” #10, guest writer Jeff Lemire takes DC’s most famous duo on a rip roaring adventure, that harkens back to the good old days.

The issues open with the pair returning from an outer space adventure, and Batman has fallen into a mysterious coma. Superman takes him see S.H.A.D.E. operative Ray Palmer, whose microscopic technology might be the one thing that can help the Dark Knight. Palmer and Superman scan Batman’s body and find something buried deep in his brain besides enough guilt to power the Eastern seaboard and an obsessive commitment to the color black. Nestled in Batman’s cortex is an entire shrunken alien city, which threatens to keep the Dark Knight out of commission permanently. Superman and Palmer shrink down and plunge into Batman’s body, ready to fight the alien menace from the inside.

Jeff Lemire has one of the fastest rising profiles at DC, and deservedly so. From making “Animal Man” one of the early highlights of the New 52, to revamping and saving “Green Arrow” from the brink of oblivion, and now launching the new “Justice League United”, Lemire’s star is getting brighter and brighter. Stepping into “Batman/Superman”, Lemire has turned what is essentially a filler issue into a very fun and entertaining story that accomplishes the delicate balancing act of sticking true to the overall tone of the series while avoiding stereotypical New 52 grimness.

While Lemire’s track record with the darker elements of DC would indicate that he would excel at writing Batman, the Dark Knight is out of commission for the vast majority of the issue. Lemire’s instead makes Superman the books star and he nails the character. His Superman is determined, trusting, and optimistic, without coming across as naive. The introduction of Ray Palmer is handled reasonably well, without the minimal amount of winking to the fact that he will soon be christened the Atom and become a superhero himself. Superman’s line about how Palmer’s suit already resembles a hero costume is a little on the nose, but it doesn’t break the issue or anything. The dialogue is quite humorous, and Batman even gets a one-liner when he finally comes to, but not to the point of seeming forced or unnatural.

The art duties for “Batman/Superman” #10 are split between Karl Kerschel and Scott Hepburn. Artist collaborations are not a rarity, but what makes this issue unique is the sheer frequency with which the pages are split. At first it appears that Kerschel pencils the scenes set in Palmer’s lab, while Hepburn draws everything in the microscopic world, but by the end of the issue there is a great deal of overlap. Kerschel’s lays a strong foundation, with hard lines and fleshed out locations. Palmer’s lab, for example, appears fully functional, something Mr Fantastic would feel at home in. Hepburn has a looser, less realistic style which does lend itself to the fantastical world of an alien colony in Batman’s brain. For the first half of the issue, these difference serve the purpose of the story, but the problems occur when the action starts and the artists begin to overlap.

The middle portion of the story becomes a mashup between the two artists as Superman and Palmer take on miniature alien rebels. Neither is bad, per say, but the change is noticeably, and the scene feels oddly disjointed. By the final action segment, featuring a groggy Batman fighting a supersized alien gladiator, the art starts to look very rushed. The lab that was so fleshed out at the beginning of the issue has been reduced to monochrome back ground colors. Batman and the alien are drawn very well, but they suddenly inhabit a grey vacuum, making the climax feel rushed.

“Batman/Superman” #10 is a throwback to the Bruce/Clark adventures of the Silver Age, but modified to fit with the New 52 DCU. The result is a fun adventure actually proves that there is room for slightly less gritty stories at DC. Jeff Lemire takes what could have been a bland filler issue and turned into something very entertaining, filled with quippy dialogue and good action. The main drawback is the issue’s art. While Kerschel and Hepburn are talented and have the potential to produce high quality work, their team up seems forced and rushed, and the changes between the two are just to jarring to notice.

Final Verdict: 7.5 – Browse. With more consistent art, the issue would have been an easy buy.