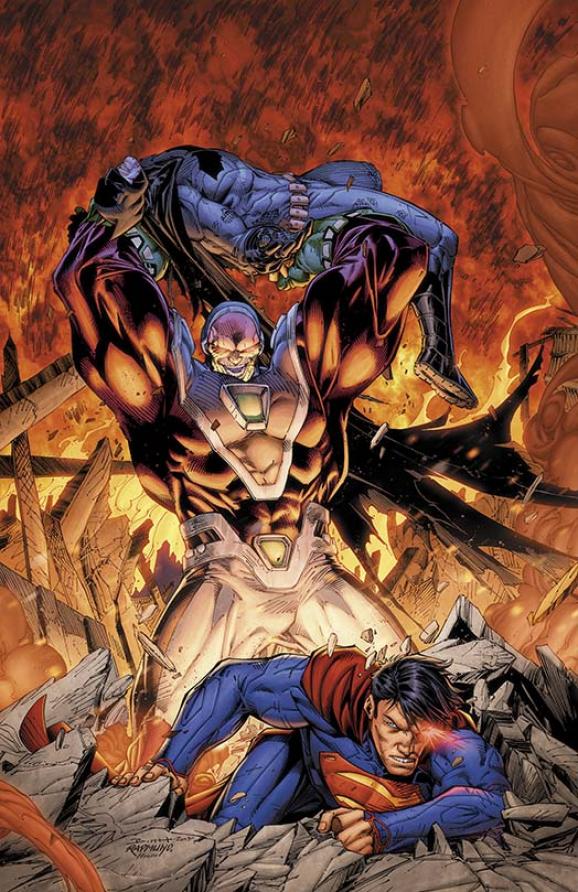 After stumbling with the first issue of a new arc, “Batman/Superman” #6 from Greg Pak and Brett Booth brings the series away from a potential nose dive. 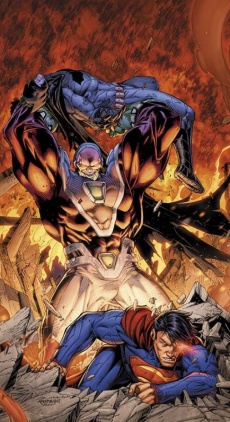 Throughout the cosmos, one name commands respect and fear above all others. That name is MONGUL, and the world-conquering despot has his eyes set on Earth! And unless Batman and Superman can take down the mad, monstrous might of Mongul, the whole world will suffer!

When first announced, “Batman/Superman” seemed like it might have been just a way to get another book with “Batman” in its title on the market. When the book was released, backed by the creative team of Greg Pak and Jae Lee, it proved to be one of most pleasant surprises in DC’s New 52 line up. The past setting and dimension jumping story from Pak presented a different take on DC’s most famous characters, and Lee’s gothic and somewhat twisted art combined to set “Batman/Superman” apart of other books.

The previous issue featured the launch of a new story arc, with Brett Booth replacing Lee on art duties, reintroduced the ToyMaster into current continuity. The ToyMaster has created a new MMO video game, featuring Batman and Superman, and pitted them against Mongul, best known as a frequent enemy of the Green Lantern Corp. The twist is that while the players think it’s a game, they are actually controlling the real Batman and Superman. As Superman fights Mongul, Batman returns from an apparently fatal wound and struggles against the control of the players. Now Batman and Superman have to save the city, as the fake video game is filled with more and more players who just want to see to the Dark Knight and the Man of Steel throw down against each other.

Greg Pak has been one of the stand out new talents at DC, crafting some of the stand out stories during Villains Month, and have recently been given the task of resuscitating the stale “Action Comics” series. It’s on “Batman/Superman” where Pak began to make his name at the company, which was why it was painful to see the series take such a dip after the first arc. The story seemed all over the place, without the time to focus on anything, and an over reliance on humor that clashed with the rest of the series. This issue corrects most of the previous issues’ mistakes. Mongul doesn’t take up a ton of story time, mostly showing up just for battle scenes, while the apparent death (and quick resurrection) of Batman pretty much cuts out all the attempts at witty banter between the two.

The thing that will likely drive some readers insane is the way the video games players hover around the action and offer constant commentary, like a whole chorus of Mister Mxyzptlks. Their presence is necessary to set the parameters of the story, but wow do they get annoying quickly. The most interesting thing they do in this issue is resurrecting Batman with a DLC power upgrade. Pak handles the character narration as well as he did in the first arc, proving that last issue’s witt-overdose was a weird anomaly. He builds the story fairly well, and it grows towards a large player vs superhero battle.

Perhaps the biggest detriment in the previous issue was the jarring art change from Jae Lee to Brett Booth. Their style really couldn’t be any different. Lee is dark and impressionistic, while Booth comes from more of the Jim Lee school of realistic visuals. Booth is a talented artist, and has done great work on the “Nightwing” series, but his visuals felt off and slightly rushed on his first issue of “Batman/Superman”. Booth has greatly improved in this issue, and his proportions no longer appear Liefield-Sequa. Everything is more detailed and fleshed out, everyone’s faces are not crazy contorted anymore.

Booth uses a very cinematic style of layout in this issue, featuring plenty of double page spreads and wide images. It works better than the previous issue, here the double pages are used to a fuller extent for actual story purposes, and not just for showing off. Booth really shines when Batman returns in his full power upgrade mode, and starts to take on Superman. We’ve seen Batman and Superman trade blows, but not when the Dark Knight is also firing lasers from his eyes. The fight borders just on the age of pose-y, but Booth is skilled enough that it looks appropriately epic.

After a one issue dip, “Batman/Superman” is again on the rise in quality. Pak has de-cluttered the story to the point where it’s mostly understandable, and given the ToyMaster a clearer goal. It’s mostly a fight issue, but Pak’s excellent use of character narration keeps it interesting. Booth’s art is greatly improved after the last issue, with much more consistent character designs and normal looking faces. He makes great use of the wide cinematic scope, and it feels like Booth is ready to step up to the big leagues and pencil an A-list title. It doesn’t quite reach the peaks of the first arc with Jae Lee, but “Batman/Superman” #6 proves it’s not time to write off the series just yet.

Final Verdict: 7.0 – A soft buy. A great improvement over the last issue and keeps the series on the right track, for now. And Batman totally flies in this issue.