One of the first reviews I wrote for Multiversity was for “Batwing” #1, and at the time, I was pleasantly surprised with the issue, and the overall direction of the book. Due, in no small part, to the Bat-family connection, “Batwing” has survived creator changes, not-too-impressive sales, and critical indifference for a year and a half now. However, with this issue, the entire book is changing. Africa will cease to be the central location, David Zavimbe will cease to wear the costume, and this issue’s creative team will be now crafting the tales of Batwing.

So where does that leave the quality of this overachieving book? Be warned, that there are spoiler-y discussions of who the next Batwing is towards the end of the article. 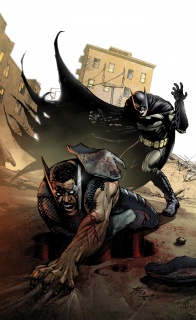 • Batwing quits—and what new member of the Batman family is ready to take his place?

If we are to be fair, this book has been sliding downhill since rather early on in the run. Original series artist Ben Oliver did a fantastic job of showing the Bat armor as an elegant costume, looking fitting, and almost majestic, on Zavimbe. However, ever since Oliver left after the first arc, the art has always presented the armor as looking silly and out of place. And when the main character looks ridiculous, it can be hard to invest in the story, panel by panel.

In addition, Judd Winick, the original writer of the series, seemed to have a very specific story he wanted to tell, that only could be told using Zavimbe, the Congo as a setting, and Batman, Incorporated (and later, Justice League International) as the elements. However, since Winick left the book, the story has gotten muddled and a bit scattershot. This isn’t necessarily a knock on Fabian Nicenza, who has been scripting the book since issue #15, but rather an observation on how the book has been trying to find its footing for some time.

So in that regard, seeing a new creative team come in with a very defined plan for this book is refreshing. Palmiotti and Gray have a great track record making good books out of lesser characters, so I don’t doubt their ability to turn “Batwing” into a book that works month in and month out. The gripe is with this issue, in particular, and how it, in its final pages, pisses all over the prior 19 issues as being something of a second-rate, back-up plan. And that is insulting.

First, the rest of the issue deserves some digital ink. #19 basically wraps up all the plot points from the previous issues, with specific focus on the arc that Nicenzia started when he came on the book. This is to be expected from any new creative team finishing up another writer’s run, and Gray and Palmiotti do their best to send Nicenzia’s story off in a respectful and touching way. The relationship between Zavimbe and Matu (his sort-of Alfred) has been the moral center of the book since the beginning, and the character got a touching and important send off, as did Zavimbe’s career as a police officer, and his will they/won’t they relationship with his fellow officer Kia. The first 85% of this story, from a writing perspective, hits mostly the right tone for the issue.

Art wise, it is a little harder to praise. Pansica shines in the quieter moments, like the graveyard meeting with Batman, or the hospital visit to Matu, where he gives each character a depth totally unseen in his action shots. Pansica’s facial expressions suffer when he needs to show any sort of happiness or real pain, as he tends to draw them as just having won the lottery or had their life torn apart in front of them (wide eyed, toothy grins vs. “I just saw my mother ripped to shreds” faces). He, as most artists do, struggles with the Bat-armor mightily; somehow the “ears” on it seem to be ever growing and the wings never quite look like they aren’t random, prehensile appendages. Once the suit goes away on page 13 or so, the art improves greatly.

So, after Matu bites the dust, and Zavimbe gives Batman back the armor, the last 3 pages deal with Bruce and Alfred discussing a few things. First up is the new Batwing armor which, to be fair, sounds awesome. Lots of fun quasi-science here, from limited invisibility to insta-cast capabilities, and the suit seems so effective, it begs a really obvious question: why wouldn’t Batman, and all his associates, now wear this? This issues comes a month after Damian Wayne was killed in battle, and we’ve seen the Bat-gang get all sorts of beat up from a variety of places week in and week out. Why would Batman entrust this suit to a brand new ally, one who has yet to earn his trust? (Not to mention why Bruce is as giddy as a school girl over tech just weeks after his son, you know, got dead)

Beyond that, Alfred asks if Bruce is going to go with his “first choice” for Batwing which, unless I’m misreading this, means that Zavimbe was a backup plan in the first place. This is, again, insulting to the character and the stories built around him. When Grant Morrison introduced Batman, Inc as a concept, he wanted to emphasize that a lot of these heroes are orphans too, and that their collective origins meant something, and bonded them together in a way. In addition, the global element was an important part of the idea – and not just recruiting foreigners, but giving people the ability to do for their homes what Batman did for Gotham. A New Yorker, or a Parisian, or an Australian, is more dedicated to protecting their homelands than a world-traveler would be. Gray and Palmiotti have said that they plan on making Africa not so central to the character going forward, and their choice of Batwing makes that abundantly clear.

(Note – I don’t like disparaging things I’ve read in interviews, but I think it is important to note just how radically different the new “Batwing” issues will be)

If you don’t want to know who the new Batwing is, now is a pretty good time to tune out. See you at the grade below!

The last two pages switch over to narration from the soon to be Batwing. We see a man fighting in some sort of MMA contest, talking about how he’s been attempting to get Batman’s attention, because he wants to join Batman, Inc. Eventually, we see who the character is, as he is introduced to the readers by the ring announcer declaring him a winner of his bout: Luke Fox, presumably the son of Lucius Fox. Now, I know the writers have repeatedly said that they want to pull “Batwing” closer into the main-Bat books’ orbit, and so the character needed to have a deeper connection to the cowl. I also could understand the appeal of a previously known character (or the spawn of a previously known character) from a sales perspective, as well as the tighter knit argument.

However, this choice still rubs the wrong way for a few reasons. First of all, this looks dangerously close to equating Africans with African Americas. Just because Fox is black doesn’t make him a fitting replacement for the African Batman, Inc agent. This would be like Vibe taking over for El Gaucho; Vibe is of hispanic origin, so he’s basically the same as an Argentine, right? It was bad enough to hear people call Batwing the “black Batman,” especially because the characters, though similar, had such radically different backgrounds and settings. Luke Fox is another wealthy, physically superior Gothamite, and he’s missing, on the surface, the type of strife that ties so many of the Bat-characters together. Even those who aren’t orphans aren’t crimefighters because they simply want to be; they all have a deep-seeded reason to be doing it. Fox seems, from his short introduction, to be a tourist (to borrow a term from Fight Club), whereas Zavimbe certainly wasn’t.

Everything about this seems to be drawing a line in the sand between what “Batwing” (and to a certain extent, “Batman, Inc.”) was and what it will be, and that is okay. I find myself wanting to defend this book to the hilt, as if I was its biggest fan; but I wasn’t. What I am feeling, however, is that one of the few “New 52” ideas that wasn’t a simple retread of an old idea but jazzed up with high collars and annulled relationshps, is going away in favor something that equally won’t work. This appears to be DC rolling the dice in an attempt to light a fire under the asses of Batman fans to pick up this book, but it doesn’t seem to be enough. If they weren’t reading about David Zavimbe, very few will pick it up just based on it now being Luke Fox.

Sure, the new gear looks cool (and more than a little “Batman Beyond”-y), and sure, people may want to see how the new character will fare. But this isn’t the bold move that might’ve been needed to kickstart the fanbase. It seems like another attempt to lazily fix something that probably wasn’t broken.

The silver lining here is that Zavimbe walked away from this experience alive and motivated to do good in the world; if I know comics at all, he’ll be back eventually. Let’s just hope that while he’s gone Gray and Palmiotti can write some stories that will do honor to the book bearing his name.

Final Verdict: 5.5 – Pick it up if you’ve been following the book thus far