Reviews
Cartoon Hangover’s animated series Bee and Puppycat moves to KaBOOM! Studios with Natasha Allegri and Garrett Jackson! Check our spoiler-free review to see how this adorable animation made the job from 2D to, uh, still 2D. 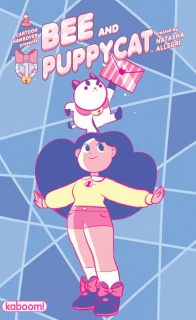 You might already love it if you’re one of the thousands who supported the Kickstarter campaign, but for those of you just joining us, if you like stories that feature magical girls like SAILOR MOON, MADOKA MAGICA, and POWERPUFF GIRLS, you will enjoy BEE AND PUPPYCAT! It’s a slice-of-life story with a twist, and it has so much comedy and enchantment you can’t help but be swept up.

Okay, before we start with the review proper, the solicit has one inspiration that is not like the other. I don’t know how much of our readership is familiar with Puella Magi Madoka Magica, an anime that could be described  as an extremely disturbing version of Sailor Moon, but let’s hope that Bee and Puppycat doesn’t suddenly drop into the latter show’s tendency for despair-addled plots because, for now, Natasha Allegri’s Bee and Puppycat is one of the most adorably action-packed shows around — and now with a new series from KaBOOM! studios, it has become one of the sweetest comics too.

In case you’re not familiar with Bee and Puppycat (First Madoka and now this? Sheesh, pal, step up ya animation game), it’s only had one wildly successful pilot revolving around twentysomething Bee (if I can add one more reference, think of a G-rated version of Abbi from Broad City) and a half-canine half-feline creature named Puppycat. In order to help Bee pay the bills, Puppycat arranges inter-dimensional temp jobs where they go to other worlds to fight creatures and solve other people’s problems. With a lot of humor and a sense of a great plot at hand revolving Puppycat’s background, Bee and Puppycat became an overnight hit with more episodes coming this summer.

It’s interesting to note how little there is of the actual B&P canon to play off of as the entire series up until now has lasted ten minutes. Other shows-turned-KaBOOM!-titles like “Adventure Time” and “Regular Show” had seasons of material and world building to back them up while “B&P” has relatively little. In that regard, “Bee and Puppycat” #1 doesn’t stray too far from what was presented in the cartoon: Bee needs some cash, Puppycat lands a temp job in space, and everyone goes on a cosmic adventure while Bee experiences some quirky mishap. The simple story doesn’t hinder the comic at all but when the story veers into unknown territory that’s when the tone begins to feel weird. There’s one dream sequence that’s just straight up confusing. Maybe if there was a sense of a larger plot to ground the sequence in it wouldn’t be so glaring, but since it takes up so much of the page the sequence feels like it came completely out of left field.

On a similar note, the one major flaw with “Bee and Puppycat” #1 has to be(e) the pacing. Both stories in this issue ramp up to pretty sudden endings that just sort of happen. It’s like going to a restaurant and having the waiter come in, put some delicious food on your table, pick it up, walk away, and then come back only to take it away again. I’m totally invested thanks to the cartoon but there’s just not enough to get me fully hooked (especially the second story, whose resolution sort of just occurs). “Bee and Puppycat” #1 isn’t a total bust; it’s actually very charming, but the thinness of the plots and their abrupt endings can be a little unsettling. It feels like more of a prologue than an actual first issue.

All that said, it’s hard to deny “Bee and Puppycat” isn’t as charming as its cartoon predecessor. Allegri’s art is gorgeous and masterfully flows from the grand cosmic to the mundane day-to-day all without losing a refreshing sense of cuteness that ties it all together. I’d hate to compare this to Adventure Time because that’s the obvious connection and “Bee and Puppycat” is aiming for something much more different, but Allegri’s art does have that same curious energy that made the former series so popular. Though I feel like some sequences would’ve worked a little smoother in animation, it’s interesting to see Allegri’s art in a static format. If anything, it’s the major reason to check out this comic.

Really, there’s a number of reasons to check out this series. Bee and Puppycat are both hilarious characters and Allegri’s art is downright gorgeous. Unfortunately, the slow abrupt pacing may turn off those who aren’t already familiar with the original short. Despite this being a series that can (and honestly, definitely will) find its way into the upper echelons of great comic tie-ins, it’s off to a noticeably slow start.

Final Verdict: 7.3 – Browse (but with a heavy lean towards Buy because really everyone should love Bee and Puppycat. At the very least, I’d definitely recommend this as a tradewait!)