The first of the “Before Watchmen” miniseries has begun! Can Darwyn Cooke use his immense talents to make this comic more than just a marketing ploy? David and Brian know! 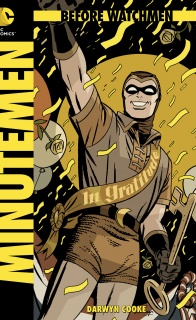 Written and Illustrated by Darwyn Cooke
“Little did we know that poor boy would lead to the end of us all.”
Plus: Don’t miss the CRIMSON CORSAIR backup story by writer LEN WEIN and artist JOHN HIGGINS!

Brian: “Before Watchmen: Minutemen” #1 is out, and garnering good to great reviews all over the internet. But the internet’s collective opinions pale in comparison to our opinions pal! So, David, what did you think of this issue?

David: Well, you kind of knew where I stood beforehand, if only because I made it completely evident that I’m a pretty massive fan of Darwyn Cooke. And you know what? He nailed it. This was a pretty fantastic comic, and I love that he approached it as a first issue as opposed to just assuming everyone knew what was going on. A lot of it was exposition, but there was so much characterization to it that I was just joyful reading it. The guy is such a talent.

What’s your take my friend? Did you like it?

Brian: I thought this was a good comic, maybe even a very good comic, but to call it fantastic is a stretch, for me at least. Even if this was issue 1 of an ongoing where these were all new characters, it would still be exposition heavy.

Let’s tackle that subject first – don’t you feel that at least 5 pages of needless exposition could’ve been trimmed from this?

David: Definitely not a stretch for me, and no, I absolutely do not think that 5 pages of exposition could be cut, even if you phrase it as “needless.” I think there was nothing needless about it – it was a #1 of more or less a brand new title, and it had to introduce a lot of characters. The way Cooke delivered that, with the superb (and familiar) framing device, was in my estimation superb storytelling that had hooks in on me, plus it was subtly varied, most noticeable in the delivery on the Dollar Bill page. I just don’t even know what you would cut. Well, besides the Crimson Corsair stuff at the end which did nothing for me. What would you cut?

Brian: I would cut the entire intro – the idea that this Hollis Mason is narrating this is the cheapest sort of wink to Watchmen history – I don’t think that scene is necessary at all.

But that said, Cooke does a nice job introducing us to each of the characters – the Dollar Bill page particularly stands out, as you mentioned.

As always, his art is something to behold. His issue of “The Shade” is probably my favorite single issue, art wise, of the year so far, and this was exactly what you’d expect from Cooke. Personally, I found the Captain Metropolis pages, along with the aforementioned Dollar Bill, to be my favorite of the issue.

David: See, I think if you cut the intro, it loses all of the weight. It’s a perfect narrative structure bridging the gap between what we know and the story he’s going to tell us. I thought it was brilliant though.

Brian: Moving on to Cooke’s pencils, what were some of your art highlights? And was Phil Noto a great, or the greatest, choice to color this?

David: I loved that Phil Noto colored this. That blew me away that he was tapped to do it, but you know, it really goes to show how much DC pulled out all of the stops for this project. As for Cooke’s art itself, I’d definitely say the artistic highlights were the Nite Owl section itself and the Captain Metropolis one. Cooke had more room to breathe with more panels and pages to play with there, and it really showed in his artistic pacing.

BUT the real highlight for me was the Gibbons-esque way he played with repetitive shapes and designs on the first two pages. Looking through those pages to see the visual and thematic connection on the page were outrageous, and really shows how much Cooke gets the original.

Brian: Agreed, Noto was a brazen and brilliant choice.

I think we could both go on and on about Cooke all day, but I’m glad you brought up the repetitive nature of the first few pages. It is in the details like that where Cooke really shines. I wonder if DC editorial put their teams through a course in all things “Watchmen” to get ready for this, or if this is just Cooke being the best in the biz at what he does.

Obviously, we only had a short glimpse at these characters in the pages of “Watchmen,” so were any of the characterizations particularly surprising or revelatory for you?

David: By far the one who was the most shockingly fantastic was Silhouette, or Ursula, as Hollis Mason referred to her. The depth of character Cooke imbued into her in just a few pages made me care for her like Mason did. It blew me away to be honest. That wasn’t a character I connected with whatsoever in the original, but after this? It was hard not to adore her like Hollis did. What about you?

Brian: See, I liked that section, but it felt a little heavy handed to me on first read. But then I realized that we are talking about “Watchmen,” a not so subtle book in its own right, and was more or less okay with it.

As for a character that stood out to me, I really enjoyed the interpretation of Silk Spectre I, a character I have very little reverence for, but really enjoyed here. The idea of media manipulation in the early superhero world is an obvious one, and one hinted at in “Watchmen,” but it’s execution impressed me in both its subtlety and its laissez-faire attitude.

So, looking ahead to next month, what do you predict will be the overarching story of this 6 issue mini? What story do you think Cooke wants to tell?

David: Honestly, I don’t think Cooke is going to look to tell a singular plot. There isn’t going to be a driving force behind everything, save getting the team together sort of like Justice League did recently but not terrible. I think he’s just going to try and whittle the team down to its essence and kind of tell little vignettes, like he did here, that gives us a glimpse into how this team worked and how it informed the eventual Watchmen team. I think ‘Under the Hood’ will be the driving influence throughout, and I think that will be the tie that binds, so to speak. Do you disagree?

Brian: I don’t disagree, but I see this more as a “snapshots from the Minutemen” sort of book. Next issue might pick up where this left off, or it might tell a story from their last days. I see this being Mason reflecting on his life as a Minutemen, and all that entails.

Let’s talk Moore v. Cooke here for a second – was there anything here that felt out of place from the narrative that Moore laid out?

David: Honestly, I don’t even want to get into it. I feel like this was a standalone comic in my mind. I don’t even want to mix it up. It fits, it works and it stands alone too. Honestly, when I got done with this comic I thought, “damn, I wish this didn’t have the “Watchmen” juju on it just so others could enjoy it without destroying their personal code of ethics.” Or whatever. Can’t a comic be good on its own without being compared to something that preceded it, even if it was in the same world?

Brian: That is possible, but I don’t think it’s possible here. This isn’t simply a shared universe situation, this is a direct response to “Watchmen.” Sure, you can discuss the merits of The Empire Strikes Back on its own, but that ignores very important elements introduced in A New Hope.

So sure, you don’t have to compare this to “Watchmen,” but I don’t think you’re getting a full picture of the book by doing so. As for me, “insert not enough rape joke here.”
But seriously folks, I think Cooke does a yeoman’s task in not making a bad comic, and not only that, but making a comic that fits, tonally, with Moore’s stuff, without feeling like he’s aping Moore.

Now, onto unquestionably the worst part of the book: the Crimson Corsair stuff. I couldn’t believe how boring this was.

David: Good god it was boring. Why does that even exist? if anything didn’t need to be brought back, it was that. Given that the original story was a metaphor of sorts that led into the finale of Watchmen, I struggle to see the purpose of this. Can you see anything?

Brian: See, my problem with this is my problem with having ‘Under the Hood’ play a role — it feels like DC wants to shuck every bit of “Watchmen” from itself and replicate it elsewhere. There is absolutely no reason to have the Crimson Corsair as a part of this series. In fact, (unpopular opinion to follow), that was the most boring part of “Watchmen,” and upon re-reading it, it remains the most boring part. For the purposes of journalistic integrity, I’ll keep reading them, but I’m not expecting to enjoy them one bit.

So, next up we have another Cooke-penned joint, “Before Watchmen: Silk Spectre” – any thoughts you want to put out there beforehand?

David: In Cooke I trust. Honestly, I hadn’t planned on picking it up, but after this? I’m in. Cooke plus Amanda Conner is a wonderful team. Given his handling of her in this issue, I can’t imagine his Sally Jupiter won’t be at least Alan Moore quality. And I mean that with all the blasphemy that may be attached to it. I love Darwyn Cooke. What about you? Buying it, not buying it?

Brian: I’m genuinely excited for Cooke and Conner to be working together, and this issue was good enough for me to give it a try.