And the minis just keep on coming! When this series was announced, many of us at Multiversity groaned and complained of yet another unnecessary, probably poorly done, miniseries. Were we too quick to judge? 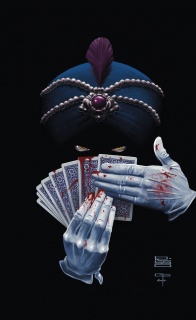 Brian: Well, DC decided that the world needed more “Before Watchmen,” and we heed the call to let the world know what they’re getting themselves into! This week, “Before Watchmen: Moloch” starts, from the team of J. Michael Straczynski and Eduardo Risso. JMS has been a busy boy in the “Before Watchmen” world, from his sub-par “Nite Owl” to his superb “Dr. Manhattan.” David, for you, was this more of a Dan Drieberg joint or a Jon Osterman book?

David: Undoubtedly the latter. I thought “Moloch” was the most unnecessary of the lot, but, when you get down to it this was a really interesting story about the root of criminal activity and what drives a person to become evil and then to search for redemption. I think it also further drives home the point that Dr. Manhattan is the dot and everyone else is the circle that surrounds him. What about you? Were you down with Moloch?

Brian: Yeah, you know me. I thought this was a great comic and, you nailed it, it is a crime book. While no one, especially the two of us, were clamoring for a Moloch book, this issue jumps towards the top of the “Before Watchmen” comics. Let’s tackle the story first – as you said, this goes to the root of who Moloch is and, while there wasn’t anything all that unique or shocking about his origin, it was handled very well. I’m also a sucker for stories about the circus (ever read Geek Love?), so I enjoyed this outcast finding his home in a den of outcasts.

But what did it for me, story wise, was the arc of redemption throughout – how, when faced with a demigod, he sought out God. I think that is a brilliant piece of writing, and framed the story in such a way that wouldn’t have been possible without. That also contributes to your theory that Dr. Manhattan is the nucleus in this atom.

What about you? What stood out for you from a storytelling angle?

David: I loved that we really got in the brain of Moloch and saw his rise, fall and redemption (and the roots of his downfall at the hands of Ozymandias). I especially loved the parallel between magic and Dr. Manhattan, and how he felt neutered, or almost inconsequential, when faced with the big blue guy. What good are tricks and misdirection when you’re facing someone who exists everywhere and everywhen? I think it’s not surprising that JMS has excelled with stories that involve Manhattan, given his history and success of writing near omnipotent characters and also characters who have crises of faith (see: Supreme Power, Rising Stars and Midnight Nation).

Besides that, Moloch is an overexaggerated version of every misbegotten person out there, living out the darkest dreams they have inside them. He’s Nosferatu by way of Houdini, and really, all he wants is acceptance. It’s JMS doing JMS best – a character study wrapped in some serious thematic arcs minus the handwringing we saw from him Grounded. I really dug this book man. Let’s talk Risso. I think I have more experience with the guy. What’s your take on him?

Brian:: I read a bunch of “100 Bullets,” all of “Spaceman,” and have been a fan of his random DC work (pin-ups, a “JSA All Stars” story, covers), so I am relatively familiar with the guy. I thought he did a really nice job; Moloch always looked disfigured and creepy, but he managed to give him incredible humanity (especially in his eyes). He is never as scary to the reader as he is to his peers, and Risso did a great job, for lack of a better word, normalizing the world around him to allow him to appear even creepier. I really dug Risso’s work. How about you?

David: Well never mind on not being as familiar with Risso! I think he was great as well. As my girlfriend pointed out, the opening sequence with him being slowly revealed from the shadows in his confession was really well done. There were a lot of really nice storytelling segments, but that one stood out. And not to be a creepster, but his style of women – bombastic – really worked well for this, as it was a story told from the point-of-view of a guy who really held women up on a pedestal, so you’d imagine all of the women he came across would be goddesses in his mind.

Which reminds me, the bit where one of the women who slept with him got pregnant? That was really heartbreaking, and well done by all involved. Is it just me or did this story seem absolutely packed considering its length? So much happened in it!

Brian: Couldn’t agree more. There was more story in this issue than just about any #1 we’ve encountered in any “Before Watchmen” title or, perhaps, even in the New 52 as a whole. I think that taking an underdeveloped character and having to tell his origin makes for a better story than taking a character that people already know about and trying to fill in blanks that were blank for a reason. That is the biggest takeaway from this entire project, honestly, which is that while fans might pine for more stories from characters they loved, these comics feel more like deleted scenes, discarded for a reason, than anything essential.

Anything else you want to add?

David: I’d agree with that statement to a degree. Some feel like deleted scenes. I have to say, I think the biggest issue with some of them is that they are too long. If they were all two or three issues long, instead of four or six, they’d be forced to get more story in there. Silk Spectre is a perfect example: great (and packed) first issue, then it starts running thin in the follow up issues. In my mind, almost all of the debuts of Before Watchmen had more depth than anything I read from the New 52 (which, as you know, I greatly soured on), it’s just that many of them struggled past strong first issues.

Besides Minutemen and Dr. Manhattan.

Anyways, let’s get to final grades my friend. I’m going to give this a strong 9. This is a damn good issue, and I’d be fascinated by it regardless of ties to Watchmen or not. Good comics are good comics.

Brian: Agreed, these are all too long.

In a bit of news that I’m suspecting isn’t really sad to anyone, we are going to suspend our “5 Thoughts” columns on these books because, frankly, they are getting harder and harder to find interesting things to talk about. We will be back with a “Dollar Bill” review, as well as an eventual review of the “Curse of the Crimson Corsair” which may need to be done 4 Color News and Brews style (that is, drinking while doing it), and eventually a series-wide wrap up. Try not to miss us too much!