The last of the first batch of “Before Watchmen” #1s is here, and it is the first to feature a contemporary of Alan Moore’s doing the writing. Would Len Wein’s relationship to the original book be a hindrance or a boon? 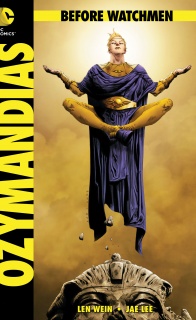 “I have goals to achieve. Dreams to make come true.”

David: So Brian, after we kicked off with two love fests, we had two straight stinkers. Now, we have Len Wein and Jae Lee’s Ozymandias. I’m curious if you think it gets this endeavor back on track, because I do. In fact, I thought this kind of kicked ass. What’s your take, friend o’ mine?

Brian: This was head and shoulders above the last two installments. This was the type of story I expected most of the “Before Watchmen” line to tell, but I am glad that so far only this and Nite Owl have been “recap” stories, fleshing out the origins of these iconic characters. And while Nite Owl’s tale fell short, I felt this did a really nice job of making Veidt a fuller, more realized character.

But we can’t go any further without praising Jae Lee loudly and strongly. How freaking GORGEOUS was this art?

David: Oh man, Jae Lee is amazing. Not that we didn’t already know that, but this was such a perfect blend of artist and project. I feel like Lee’s aesthetic is something even Veidt would appreciate, as it gives the book the feel of a really exceptional graphic history of great man. His art made moments like Veidt’s revenge on the school bullies or his exercises in martial arts in the Himalayas even more incredible than they already were.

That’s the thing you have to say about Before Watchmen: in theory, this project has assembled a real all-star team of artists. Writers too, but their job of having to bring these stories to life without feeling redundant or superfluous is much more thankless. So far, three of the five artists have hit home runs, and Lee really provides a wildly different flavor of art than Amanda Conner and Darwyn Cooke did in their previous killer issues of art.

Basically, he’s the bee’s knees. What parts of his art did you enjoy in particular?

Brian: I thought that, above all, the design and layouts of the book were tremendous. The pages have a sense of grandeur to them, and Veidt’s story fit into the layouts like a glove.

An interesting thought about the artists assembled is that each one, all the way down the line, is someone who is known for doing great work, but are rarely mentioned alongside the true stars of the medium. I was (and am, sort of) shocked that Jim Lee wasn’t going to be doing a mini – you’re the co-publisher of a company taking a huge project off the ground, as well as being one of the most respected artists in the world, and you’re not going to do one of these? But thankfully, he’s not – Lee would be a terrible fit for this series.

And yet, the five art teams we’ve seen so far, while not all natural fits, have all, for the most part, done work that is within their style, but feels like a somewhat natural fit. Amanda Connor on a “Watchmen” property doesn’t sound like a logical step, but it works, and I feel the same way about Lee. The assignment makes sense, but it was never going to be a surefire slam dunk, if only because who knew what the material would be.

Now let’s set our sights on this material; to me, it was far weaker than the art, and was a little by the numbers for my taste. I’m going to guess you liked the script more than I did.

David: Yeah, I actually really liked it. If anyone, save Silk Spectre, benefits from a few extra layers, I thought Ozy would. And he did in my mind, as this issue walked us through a ton of his history in really engaging ways. Sure, a lot of it was by the numbers to a degree, but it was handled well by writer and artist so, in my mind, it elevated above the formula.

Brian: I wasn’t a huge fan of the story beginning in the moments before Veidt’s confrontation with Rorschach, Nite Owl, Silk Spectre, and Dr. Manhattan in Antarctica – that feels like a cheap move, designed to purposely stir up old feelings instead of develop new ones. It wasn’t that the script was bad, but I think that Wein being the editor on the original means he will be a little more precious with the material than the other writers, and that may not be a good thing. Overall, I thought he did a nice job, I just think that, script wise, this is one of the least revelatory or surprising works; everything fits into place where you would expect it to, and that isn’t necessarily a good or a bad thing.

I thought that Wein did a good job tapping into some of the implied text of Moore’s work, like Veidt’s sexuality. Personally, I never really read the character as being potentially gay, but I’ve seen some people had always interpreted his actions that way. Here, when we see him retracing Alexander the Great’s voyages, we see him in the embrace of a man. Now, that could be because he truly wants to faithfully recreate what Alexander, who is documented as having many male lovers, did on his trips. The other interpretation, of course, is that Veidt himself is gay.

Now, he does talk of falling in love with Miranda. Is he bisexual? Is he so smart that his brain doesn’t operate in the binary of “straight/gay” anymore? Is he truly a 3 on the Kinsey scale? Does any of this really matter for the story?

David: Well, before I get into that, I did want to say that Ozy wasn’t necessarily in Antarctica right before that whole deal. I actually took it as he was at the beginning of putting that plan together and he was recapping where he’d been before. He’s like Dewey Cox – he has to contemplate his entire life before he performs.

As for the sexuality deal, I took it as sexuality and having to make a choice isn’t even a consideration for him. Like you said, his brain doesn’t operate in the binary straight/gay anymore. I’m a little worried for the sanctity of Bubastis, personally.

It matters for the story only a little bit, in that Miranda’s death triggers a major change for him. His omnisexuality doesn’t necessarily, besides to show us that he’s “different” and operates on a whole other plane than us.

Brian: I was surprised just how Batman-esque Veidt is in parts of this story. They go about their origins differently, but here are two orphans, who by sheer will (and some money) take their natural physical and mental abilities and exploit them to their furthest logical conclusions (and also have sweet secret lairs). I know that Nite Owl is the far more Batman-ny character in “Watchmen,” and that Peter Cannon, Thunderbolt was the inspiration for Ozymandias, but I see more than a little caped crusader here.

David: Yeah, I could see that. It’s an easy leap to make, given that you have a hyper intelligent regular guy who pours his money and time into advancing his brain and body. He’s like a swinger Batman who might be a little too obsessed with Alexander the Great.

Brian: Overall, I think Wein did a good job, and Lee really excelled at taking Wein’s script and turning it into something completely beautiful and revelatory. One of my favorite little moments in the book is the poster for The Thing From Another Planet in Veidt’s childhood bedroom. The foreshadowing of having a tentacled creature on his wall may be a little on the nose, but we aren’t smacked across the face with it. I enjoyed it, and thought it was one of the nicer pieces of foreshadowing in the whole series thus far.

David: Yeah, that was pretty incredible. I saw that and just started smiling. It was a nice touch, and really pretty fantastically rendered by Jae Lee. Like everything else in this book.

So what would you give this specimen, my friend?

Brian: Well, I’m going to give this a solid 7.5. If the story was a little more interesting/unique, I would’ve given it a much higher rating. And the continued presence of the “Crimson Corsair” back up knocks it down a half point each week. You realize we’re going to have to read those at some point, right?

David: I in no way will ever go back and read the “Crimson Corsair” business. There’s nothing in the world that could get me to do that.

This issue though gets an 8 from me. Really solid come back issue for the event…or whatever you’d call it. Definitely more on the Jae Lee side for greatness, but I thought Len Wein’s effort was pretty damn solid too.

Brian: Before we go, we should re-state that, for the next 5 weeks, we will be doing quick “5 Thoughts On” posts for the #2s in this series, before launching back into standard reviews for the #1s of “Dr. Manhattan” and “Rorschach,” one of which I’m very excited for, and one of which I think will probably be pretty bad. I’ll let you guess which is which, but let’s just say that I full expect Dr. Manhattan to walk across Mars to try and regain his humanity.

There was talk of also doing a monthly podcast discussing these with myself, David, and David’s 4 Color News and Brews partner, Brandon Burpee. Be on the lookout for that once we get some time to throw it together. And we’ll see you next with for our double shot of Darwyn Cooke, “Minutemen” #2!