Perhaps the most anticipated of the “Before Watchmen” series is finally here, with the “Joker”/”Luthor” team of Brian Azzarello and Lee Bermejo at the helm. When we look into his mask, what will we see? 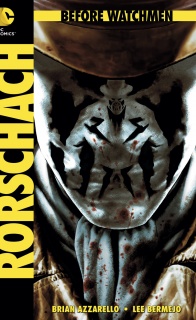 “What made you this way?”

Brian: Well David, after a few weeks of patrolling these streets solo, we’re back! This week we get the penultimate debut of this line with “Before Watchmen: Rorschach” #1. Going in, this was the most anticipated book for me, but I must say, this isn’t what I expected. What was your initial reaction to the book?

David: “Bitch to be you right now.”

WTF DOES THAT MEAN.

I don’t even know what to say about this. This was a really kind of crappy/mediocre Batman comic with Rorschach running around not sounding like him besides the occasional “hurm.” It’s official…well, to me at least…Azzarello is the bane of Before Watchmen’s existence. I feel bad for Lee Bermejo. That’s my initial reaction. What about you?

Brian: So, just to clarify, you think that Azzarello is worse than JMS in this endeavor?

David: At this point…yes. This was a bad comic. Agree?

David: Well I never read #2. Was that super terrible? I read #1 and was not a fan. I feel like this was especially bad. Am I crazy or did Rorschach never cuss previously?

Brian: It was terrible. Insanely terrible. But, this was pretty bad, too. I don’t remember Rorschach having a sailor’s mouth in the past, but I could certainly be mistaken.

Let’s start digging into why this is such a disappointing comic. Now, I know I’m biased because it is the city I grew up 9 miles from, but I’m really sick of people playing up New York, especially in the 70s, as this hell hole with no redeeming qualities. It was dangerous, sure, but this feels like a flashback on Cold Case or something – just the laziest possible way to describe a location. And from there it all goes downhill.

David: Wait, so you’re saying that NYC hasn’t always had drug running super gangsters running through the sewers? Because I thought I saw a documentary on that.

Another thing that really bugged me about Azz’s representation of Rorschach was that his version apparently, with the mask off, is a kind of amenable guy who is known at one specific diner as someone people wouldn’t mug. Almost like he had friends. In what freaking world does this character who can barely get the people closest to him to not hate him have friends? This book was like bizarro Rorschach.

Brian: Yeah, that read extraordinarily false. Rorschach is the real guy – that mask is his “real” face. His regular life exists to feed Rorschach, not the other way around. Just as Batman is the real Bruce Wayne, and therefore most of his intimate relationships are with allies of the Bat, Rorschach shouldn’t be cuddly with the folks at the Gunga Diner. He should be eating pork and beans in a can, damn it!

Ugh – there is nothing interesting about this story. Seeing Rorschach on a failed mission isn’t interesting, fun, or enlightening at all. It’s just lame.

Lee Bermejo, who I have a serious art crush on, does about what you’d expect him to, and everything looks gorgeous. But even Bermejo couldn’t polish this turd to “acceptable comic” status.

David: He does pretty well. Honestly, the stink of the comic gets on him I feel and it’s almost like parts are slightly phoned in. Like the sewer fight sequence was pretty hard to follow. The choreography of it left a little to be desired. But besides that, he did all of the Bermejo things he does really well: well crafted, realistic models; great atmosphere; (mostly) sharp storytelling. I’m not sure if you watch Workaholics, but this comic reminded me of their “poop dollar” trick, where they wrap a piece of poop in a dollar for an unassuming person to pick up. In this case, Bermejo’s art was the dollar and everything else was the poop.

Brian: I don’t watch Workaholics, but that does, indeed, sound like this comic.

What especially pisses me off about this book is that so little is revealed about Rorscach pre-“Watchmen,” that Azzarello and Bermejo could’ve done so much with his backstory, and done a really unique, interesting book. Instead, we get a cut-rate Batman story, without any of the interesting parts of Batman.

David: That’s funny, because that was exactly what I was thinking when I read it. Do you think Brian Azzarello secretly hates this project with every fiber of his being and is personally looking to submerge it? This is basically an “Adventures of Rorschach” book. There’s no inclination that this will be a rewarding experience besides possibly being a good story, and that is highly in doubt given this book’s poop dollar nature.

So, now that we’ve thoroughly trashed this book, what do you give it? And on top of that, I have to ask…did you read Crimson Corsair?

Brian: Maybe Azzarello does hate this, but that begs two questions: 1) Why did he say yes? and 2) Why did editorial read this and think “Yeah, ok, we can release that.” Not that DC editorial has Axl Rose’s standards for what can be released, but you would think that the most popular character from their most popular catalog item would be more of a priority than just “let’s put him in a sewer.”

I give this a 4.0 – Bermejo can’t be too maligned for his artwork, but the story is just atrocious.

Re: Crimson Corsair. I didn’t. Haven’t since “Minutemen” #1. BUT, since we are loyal reporters of all that is “Before Watchmen,” we should probably catch up before the single issue conclusion is released later this year. Luckily, DC has a website set up that collects all the installments, so I’ll just read that eventually.

How do you score this?

David: Yeah. That’s why I am going to give it a 3. Bermejo did a good job, but nothing to make it rise above the VERY humble beginnings. But that means I am effectively giving Azz a 0, which I am fine with.

I can’t even explain this comic. I’m not sure if it was the worst Before Watchmen installment yet, but it was not good. I do think it is interesting that there is a pretty clear divide being established between the good books and the bad ones. What an up and down endeavor.

Brian: And I can almost guarantee another poop dollar next week, when the great Adam Hughes tries to make sense of another JMS script. We’ll be back for next week’s debacle, and we hope you will be too!

Final Verdict: 3.5 – Throw in the sewer or use it to mop up your experience in a weird nudie booth