Last week, we gave a near rave to “Before Watchmen: Minutemen.” Is it possible that one week later writer Darwyn Cooke and illustrator Amanda Conner could have topped it? Our Before Watchmen team of Brian and David tackle that idea below. 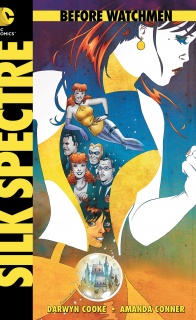 “Oh sweetie, you’re too young to hate. Wait until you’re older and the world gives you a good reason. Trust me, it won’t let you down.”

Brian: Before Watchmen Week 2 is upon us, the Darwyn Cooke is back, with Amanda Conner in tow, for “Before Watchmen: Silk Spectre” #1. I’ve got to ask, David, is this real life? How can these be this good?

David: I do want to be that guy and point out that I was bringing the faith on at least some of these books. It isn’t saying much, but I might have been the most positive person about this endeavor, but there may be evidence on the Internet that disputes that.

That said, this is a wonderful comic. It might actually be a little bit better than Minutemen was for me, and I loved Minutemen. And the reason why is this has so much more of the personal touch. Minutemen had that too, and they both felt like their own worlds, but after this one issue I already feel like Silk Spectre (II, as it may be) is already a more well developed character than she was in all of Watchmen. Is that blasphemy? Am I crazy?

Brian: I couldn’t agree more. This had all the elements you could possibly want: The characters were true to their original form, yet you also get a ton of growth and depth to these people. You truly felt for them – both for Sally, trying to do right by her daughter and pass on her legacy, and for Laurie, trying to be her own person.

Although the story is 100% inessential, even in the inessential world of “Before Watchmen,” there was not a missed beat or a flawed moment to be found. I’m legitimately blown away by this comic.

David: Yeah. But this goes back to our original discussion when we were ramping up to this world: does it matter if it is “inessential?” What makes an issue of Uncanny X-Men more essential than this, besides continuity? This was legitimately one of the best comics I read this year, and I can’t imagine anything making it more essential than that. Y’dig?

Let’s start with the art – Amanda Conner hits all the right notes here, capturing the teen angst, puppy love, and pettiness of high school, but anchoring it with some real emotion.

And then, interspersed throughout, we get little trips into Laurie’s mind, where she is literally “over the moon,” with happiness, or wanting to jump into a bottomless pit. In these moments, Conner adopts a playful, almost “Tiny Titans”-esque tone and really nails the emotions of a teenage girl.

David: Oh yeah, that was going to be one of the main things I hit on. I love those little asides into Laurie’s mind, showing the enthusiasm she has for a life that isn’t training and following in her mom’s footsteps. Handled in the wrong way, they could have been a nightmare. But the way Conner did it was absolutely fantastic.

And everything throughout was pretty much spot on. I loved the scene where Laurie was fitting into the costume and upset that she didn’t fit into it like her mom did…in a certain area. It was a funny moment, and something that Conner excels at – the emotional aspect of artistic storytelling. She’s great at conveying emotion (like when Laurie runs away for the night and how Sally is devastated) or the humor of any number of moments, or the child like glee many things drive Laurie to. It was beautiful work.

And I have to give props for something I didn’t know until I opened this book up: Conner was a co-scripter with Cooke on this book. I thought there was a separation between the two, but they co-scripted. That’s pretty rad, and it makes sense given how well the art interacted with the script.

Brian: This was one of the most seamless books, in terms or art and plot working together, that I have seen in some time. Somehow, this was more seamless than Cooke working by himself last week! I, too, was unaware of their co-plotting details, but however they divided the labor, it worked.

Let’s talk about the story a little bit. Do you think that this series will have much in the way of her being a hero, or is this a pure origin story, taking us through how she became who she eventually becomes? Frankly, she could never done the costume and I’d be fine with it.

David: Well, she’s already donned the costume, so we’re past that point! But yeah, I think this one will be about both Sally and Laurie to a degree – or at least that’s my guess. How Sally’s life carries on after Laurie leaves. How Laurie ends up joining the team and meeting Dr. Manhattan. Minutemen may have touched on familiar material to some, but this? This is something we’ve never seen before, and it enriches both of the characters dramatically.

I love the point they left us at too. How great was their answer to those dirty hippies? They loved that.

Ultimately, I think it will be less about Silk Spectre and more about these individual women and their relationship. And how Laurie, no matter how much she rebelled, still ends up following in her mom’s footsteps to a certain degree. Would you agree with that?

Brian: Yes, I would. This feels like your classic “child tries to rebel but basically becomes their parent” scenario. But I’m happy to see that carried out here. Like you said, “Minutemen” was all about stuff we’ve already seen, just expanded, whereas this is all new.

I think it is pretty clear that we both really loved this book, so let’s get to grading it. This gets an easy 9 for me. How about you?

David: Well, to close, I wanted to talk about two things. In recent comic history, many people (including myself) have claimed that comics from the Big Two are struggling a bit creatively and many others have said that there aren’t any great female characters or creators out there. But this issue covers all of those bases. It is a great, great book that happens to highlight two fully realized female characters as crafted – at least in parts – by one of the best female creators we have out there. If people aren’t supporting this because of the whole Alan Moore rights deal, they’re sabotaging a couple causes for one. But hey, many are going to do that.

I’m going to give it a 9.5, and say this is the clubhouse leader for best comic of the month so far.