Another week, another release of a new “Before Watchmen” title, as writer Brian Azzarello and artist J.G. Jones team up to bring The Comedian back to life. How is the comic? Do any surprising guest starts from history show up? You can find out all that and more, as your BW team of Brian and David chat it up below. 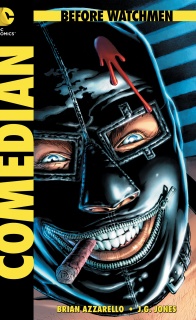 Brian: Sadly, Darwyn Cooke can’t be behind all of the Before Watchmen books, so that brings us to “Comedian” #1. This is an odd tale of friendship, heroism, and tragedy. I can honestly say that this book managed to surprise me quite a bit, although I’m not really sure what to make of it. What about you, David?

David: Oh man, what a weird book this was, huh? I really don’t even know what to say. I think it’s interesting that they set up JFK’s death as the impetus for The Comedian becoming a complete bastard, effectively giving him a back story and some semblance of a reason for all of the evil things he does (although he already was pretty bad to begin with). I think the weirdest thing about this book was I recognize that it is well made and well told, but I just didn’t like it that much. It was effective while being kind of cold, which is kind of perfect given that you could use that to describe The Comedian himself.

Brian: I agree – this was not an “enjoyable” book, but it is a book I’m sort of glad exists. I mean, I think we all expected Watchmen by the numbers here, and that certainly isn’t the case. This is a bold, but not great, direction to take the character. I also take issue with the fact that he wasn’t a monster before the events of this issue, since he was already a rapist, but we’ll get into that in a few minutes.

Basically, for those who are reading our reviews and not the issues (if such a demographic exists), this story is one big bro-fest between the Kennedys and the Comedian – touch football, betting on football, making plans to go see football; I bet no one saw such a glowing endorsement of the pigskin coming in this issue. Toss in a little murder for Jackie, and you’ve got the basic gist of this story.

Let’s touch on the relationship between Blake and the Kennedys; does this feel authentic to you? Personally, I couldn’t accept these personalities mixing. I know this isn’t “our world,” but the Kennedys didn’t exactly seem like the logical pals of Blake. What did you think?

David: I’m not sure if they really said he wasn’t a monster…just less of one? I don’t know. They didn’t really make him sympathetic as much as they humanized him a little bit. Even in Moore’s hands, the guy was just a straight up monster. That’s the interesting thing when you look back at Watchmen – how many of these characters could you even describe as remotely likable? Nite Owl? Sort of?

As for the relationship with the Kennedy family, yeah, I felt like it could have been a thing. I mean, they were known as a crew of good ol’ boys who had a lot of stature and celebrity to them for a long time. That describes the Comedian. The Comedian was a soldier. So was JFK. It makes sense to me in a lot of ways really. Especially given how “American” the character of The Comedian always was. Can you get much more American than a Kennedy?

Here’s a weird thing: was there a part of you that thought The Comedian was going to be the person who killed JFK? I truly thought that was what we were building to the whole time. I’d wager that could be the rest of the series – The Comedian trying to find who killed JFK.

Brian: See, I get the soldier/true “American”/celebrity thing, but the Kennedys were notorious for cutting “friends” loose when things got a little rough, Frank Sinatra being the prime example of that, so I don’t know if a liability like Blake would’ve been kept on.

And yes, I completely thought that the Comedian was going to be the one who wound up killing his buddy Jack Kennedy – and I’m glad that isn’t the story. I didn’t need a weepy Blake wiping his tears away while trying to peer in the scope, but I don’t know if him hunting down the Kennedy killer is all that much more interesting.

Let’s talk about J.G. Jones for a second: what did you think of his art? In some ways, I feel he drew the short straw, having to draw such iconic people, and so any panel that doesn’t look perfect stands out so much more than if he was drawing a fictional, or exaggerated person. But overall, I think he did a nice job, if not the tour de force I was perhaps expecting.

David: I actually thought J.G. Jones was the most disappointing aspect of this book. It quickly became apparent why he was the artist chosen (besides stature and talent), and that’s because he does likenesses very well. I immediately recognized JFK, which, you know, deserves some kudos.

But overall, it was a pretty blah affair, artistically. For the most part, his art felt static and documentary like, even in the parts where you had action set pieces. I thought by far the best part of the issue from an art standpoint was the close with Moloch the Mystic and The Comedian. I thought that scene did a great job of conveying the weight of JFK’s assassination and the mindset of both Moloch and The Comedian.

Brian: I think Jones’s art fit the story he was telling; you call it documentary like, and that is accurate – the story is supposed to be documenting this time in American “history.” That said, it was a little dull, but I could see that once the action ramps up, he’ll do more exciting work.

But yeah, this is a weird book. I wouldn’t say I liked it, but I wouldn’t necessarily say it is terrible, either. This is a weird gamble of a story, but one that didn’t work for my tastes. I give it a 5 – how about you?

David: I’m going to give it a 6. I feel like that’s a proper grade for a book that is in theory well-written and illustrated, but left me cold. Darwyn Cooke and Amanda Conner just hosed everybody man. They’re too good.

Brian: I think you’re letting it off a little easy there, Mr. Harper. Theoretically, most comics are “well written and illustrated.” Very rarely do you see a comic and say “ugh, there is no value in that” – even the worst artist working for Marvel or DC is better than the best you or I could ever do. And as boring and non-essential as ‘The Culling’ was, Tom DeFalco and Scott Lobdell told a story with a beginning, middle and end that was technically well put together.

To say that a book deserves an above average grade for not being decently arranged, well, you’ve gone soft sir. I liked the art more than you did, but I still can’t see this as anything more than a flat out average book.

Brian: I AM HAPPY.

Did you bother reading “Crimson Corsair” this week? I sure didn’t.

David: Nothing in this world could get me to read that. I think I wish it was still a prose effort. I see it and I quickly shut my book.

Brian: It is, indeed Kubert time, as well as JMS time. Will this be the glorious JMS of ‘Ladies Night’ from “The Brave and the Bold,” or the overwrought JMS of “Grounded?” We’ll find out next week!

David: Oh god, you had to bring up ‘Ladies Night’ didn’t you? MEEEEEDIIIIIOOOOOCREEEE. Give me some Midnight Nation JMS! But I’m interested to find out if JMS’ still has it. My initial inclination is a big fat no.

Brian: Have you read “Superman: Earth One?”

I doubt his prowess too, but to call ‘Ladies Night’ mediocre makes me doubt your prowess as well. Them’s fighting words!

David: Chiang was great, but the comic itself was silly fun at best. It wasn’t so much mediocre as it was overrated. It was obvious, dumb and ridiculous to me. But that’s another story for another time.

Brian: I feel sorry for your employer, what with you being drunk before noontime. Go sober up, Harper, and we’ll be back next week!