“Birds of Prey” is a bunch of things all at once: a team book, a Bat-family book, a book full of female characters, and a book about redemption. In fact, I think redemption is the clearest word I can find to talk about this book. Black Canary murdered her husband, Poison Ivy is a “recovering” eco-terrorist, Batgirl is still mentally getting over being paralyzed – everyone has something to prove, and has surrounded themselves with similarly fractured people. 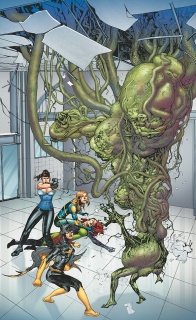 – THE BIRDS bring a gravely injured POISON IVY to the Amazon hoping to help rejuvenate her, but they’re going to need her help more to stay alive! Welcome to the jungle indeed! – BLACK CANARY discovers something amazing about her powers!

Because some of the team are friends, some are possibly psychotic, and some are untrustworthy, that somewhat explains the inconsistent tone that Duane Swierczynski has given the book over its first ten issues, and that is quite apparent in issue 10. Batgirl and Black Canary joke like old pals, while Starling and Katana don’t really have anything to say to each other.

The one thing that everyone does have, in spades, are Poison Ivy jokes. Specifically, jokes about frozen vegetables. You see, to defeat a Talon in last month’s “Night of the Owls” crossover, Poison Ivy froze herself with her assailant, and now needs to be thawed out, in “a pulsating core of the Green.” Because of her being frozen, and someone with plant-like attributes, it’s joke time! Smelly frozen veggies!

If that isn’t corny enough, manifestations of the Green are “brussels sprouts from hell.” All of this could be a dream brought on by “too much broccoli.” When some C4 is lit to destroy the Green creatures, Starling tells them to “go green.” Hardee har har. These jokes feel shoehorned in and out of place, and add nothing to the issue.

However, connecting Poison Ivy to the Green is another example of the DCnU’s attempted connectivity. This one works far better than some of the others, like making Beast Boy red instead of green in a nattempt to make him tied into the Red. But Poison Ivy, as an ecologically minded person being tied into the Earth’s plant-based ecosystem is a wise move, and allows her character to be more than just a second rate Batman villain.

The connection to the Green is stronger than just through Ivy; former “Animal Man” artist Travel Foreman is the new ongoing artist for the series. I was only familiar with Foreman from his “Animal Man” work, so I was surprised by the lack of nightmare imagery in this book. He is a much, much better fit for this than I anticipated. His characters still tend to look like they’re screaming at all times, but aside from that, his work was solid.

The circumstances that led to Foreman leaving “Animal Man” are actually pretty interesting – “Animal Man” was the only book DC offered him, and he needed work to pay bills relating to his mother’s illness and subsequent death. However, the tone of Jeff Lemire’s scripts, after losing his mother, proved to be too much for Foreman, and he felt burned out.

First of all, good for Foreman for being upfront about his reasons for leaving. Secondly, that is an angle of being an artist that I never really thought of before, but it must be intense to live within these worlds for weeks at a time working on pages. Not that he is drawing rainbows and unicorns in “Birds of Prey,” but lighting liquid cocaine on fire and having a sword with a soul in it are certainly less stressful than drawing a family trying hard not to get eaten by horrible monsters. However, Jesus Saiz is still missed on this book – Saiz was a perfect fit for this book, and hopefully will find a regular penciling job after his run on “Resurrection Man” ends in September.

The fact that this is a Bat-family book is never really shoved down the readers’ throats, much like it is in “Batwing,” where Batman has guested, sometimes unnecessarily, many times now. Batman just exists on the periphery of this book, and his brief appearance here shows his reluctance to embrace the Birds as allies. This is also a pleasant writing of Batman, who is at his best when written to be ambiguous with his trust.

Overall, Swierczynski has done his best work when crafting Starling. Her character is a loyal friend to Canary, like Batgirl, but seems far more mysterious and dangerous than either. Her backstory, for now, is shrouded in mystery, but Swierczynski has managed to make her a fun character with secrets, as opposed to a secretive character who is inscrutable without knowing what makes her tick.

This issue is not the best of the series, but it is keeping the series on point, and allowing interesting stories to be told outside of the cowl in Gotham City. It also has 5 strong female characters at its core, and it never feels like a book that is pandering or attempting to tackle female issues a male writer isn’t suited to cover. This is simply a good team book, where the team happens to be female. Neither Saiz nor Foreman draws gratuitous skin, but both allow the characters to be sexy without being sexpots. That is more than most female-centric/male-written comics can say, and they should be applauded for it.

Final Verdict: 6.5 – Browse this issue, but give the series a shot