There is something about the third generation of DC heroes that seems to stick. Kyle Rayner was supplanted as main Green Lantern, but stuck around and became a key element to the GL mythos; Tim Drake, the Robin who wasn’t the original and wasn’t hit in the face with a crowbar until he died from it, is still swinging around Gotham; Jaime Reyes, the third man to be called Blue Beetle is the only Beetle still standing in the DCnU. And, despite lots of excitement when the book was released, reviews have been tepid at best, and sales pretty poor. While a cynic would say that the book is still on the shelves because of the young Latino lead in a marketplace where diversity is sorely lacking, I think Reyes has been an overall enjoyable character, and one that has a little more mainstream recognition due to some guest spots on Batman: The Brave and the Bold. So, ten issues in, what does this book have to offer? 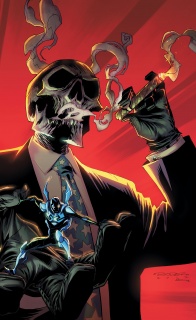 – BLUE BEETLE is on the run from the D.E.O.!
– Seems this whole “living by himself in New York City” idea wasn’t JAIME’S best.
– Guest-starring MISTER BONES

DC is really taking this “our universe needs to be more interconnected” thing to heart. The D.E.O. (Department of Extranormal Operations), currently being seen in “Batwoman,” pops up here, as does a super special surprise guest on the final page (more on that later). It is nice that, unlike in the pre-New 52 days, this doesn’t just mean Batman shows up every now and then. I don’t think Mister Bones exactly makes books fly off shelves, and it doesn’t exactly pull “Blue Beetle” away from what it was already up to by having the D.E.O. show up.

But what exactly does this book gain from this appearance? Last month, it crossed over with Tony Bedard’s other DCnU book, “Green Lantern: New Guardians,” and while it, again, exposed the book to new readers, the narrative was pretty much the same at the end of the issue as at the beginning. And the same can be said for this issue as well: when the issue begins, Jaime goes to the D.E.O. for help, they torture him instead, and he escapes. Now, not every issue can be “Crisis on Infinite Earths” #8 and change the lead character forever, but too many DC books right now are existing in the “stand alone stories that go nowhere and aren’t great” category.

Just a little while ago, noted Jaime Reyes superfan David Harper and I were discussing one of my favorite single issues of the past 5 years, ‘Ladies Night’ from “The Brave and the Bold #33,” even if David isn’t quite the fan of it that I am. This issue doesn’t change a damn thing for any character involved, but is a really fine story, with high quality art, a clever script, and a purpose. And while “Blue Beetle” #10 has some nice art by Guara (and a really effective cover by Paul Renaud), this just feels like a filler issue. And if DC is needing to publish filler issues not even a year into a title, then what the hell is the title doing being published in the first place?

Guara’s art really is the stand out piece of this comic – he manages to make Jaime expressive, even though his face is obscured behind the scarab, and only his eyes and mouth can be used to convey such things. He also handles the weirdness of the D.E.O. quite well, from the aliens in the holding cells, to Mister Bones, to the receptionist in a bubble.

One of the better aspects of the original Reyes Beetle book was his family – they felt real, and felt integral to the story being told. Here, they are used in one scene, and that one scene turns into a borderline minstrel show of Latino stereotypes: the overbearing grandmother, the token Spanish phrases thrown in, the brassy woman and the chicken-shit man. The thing is – his Mexican heritage can be a rich part of his backstory, and his daily life, but throwing one Mexican slang phrase in his dialogue, or having his mom say “por favor” to his dad doesn’t do that.

If Bedard were really interested in making Reyes a complex character, there are many ways to incorporate his cultural heritage into who he is. Clearly, these are different beasts, but look to “Hellboy in Mexico” for an example of a way to infuse a story with culture that is maybe even a little over the top, but truly gives off the feel of Mexico. The story here seems like it could be written about any nationality, with just a few words excised and replaced. This is faux diversity, and should really be corrected.

The book has also taken a page from an unlikely source – the recently cancelled “Static Shock.” Both books show their teenage main character leaving their hometown for New York City. Now, as a denizen of the NYC suburbs, I have no beef with the Big Apple, but a story set in Texas is much more interesting than yet another New York comic. Plus, this pulls Jaime away from his family (not that his family has been great), and makes him just another cog in the NY wheel instead of the hero of El Paso.

Now, I mentioned earlier that there was a surprise in the final page of the book. I’m surprised it has taken 10 issues, but finally Blue Beetle has been brought together with Booster Gold. In typical New 52 bullshit style, the page reads: “Together Again for the Very First Time!” This makes no sense – if you’re targeting new readers (the whole point of the New 52), then why tease a friendship that used to exist? This is a relationship that I have loved through all its incarnations, and was actually hoping for a Blue and Gold book in the New 52, but I’m still a little surprised that after ten issues there is nowhere for this book to go but back to the well.

And therein lies the problem with this, and about half of the New 52 books, they want it both ways. They want to pull on the nostalgia strings without explaining every single tiny detail in case a new reader is lurking around the corner. This just doesn’t work. Pick a horse, damn it, and see it through to the end. Until that happens, “Blue Beetle” and its ilk will just be mediocre takes on potentially great characters. And I will not be buying them.